This Lily Pad Sutra column explores my years of combining meditation practice with location-independence, what I call lily-padding.

May’s article described my own metta-morphosis whereby my meditation practice went purely metta, both as an act of self-compassion and to support my fellow meditators. And earlier columns explored the extraordinary people and animals I’ve met jumping from lily pad to lily pad. What I haven’t yet shared here is the story of the remarkable trees that lined my path.

Possibly the most inspiring tree that I stumbled upon throughout my lily-padding adventures I encountered in Lincolnshire, when I was looking after a 22-year-old cat (that’s an amazing 154 human years!) Just down the road from this particular lily pad stood Woolsthorpe Manor, Isaac Newton’s birthplace. And in the front garden of the manor stood the famous apple tree under which he discovered gravity. Today, the apple tree is a site of scientific pilgrimage and is considered one of Britain’s Top 50 trees.

If you take the guided tour of the manor, you can visit the room where he first refracted light, and hear about how his family despaired that he spent so much time seemingly doing nothing under that tree.

Inspired by his fascinating findings, I started to wonder how trees could inspire meditation practice? Could the process of photosynthesis that converts our unwanted CO2 into necessary O2 be compared to the practice of generating metta? Can metta actually convert the atmosphere around us as trees do?

In Biophilia, Arvay describes how trees release chemical compounds called terpenes, which have all sorts of health-promoting benefits for humans. One study showed how even just having pictures of trees in hospital rooms supported the parasympathetic nervous system of recovering patients more than blank walls. And according to Arvay’s research, shinrin-yoku (the art of forest-bathing) originated in China some 2,500 years ago (not Japan, as commonly thought), which is around the time Buddhism arose.

With all these new dots connecting, I began to consider my meditation practice not as something I just do for my own benefit but—like a tree—as a way of actually supporting all sentient beings on the planet.

Like any excited scientist with a new hypothesis, I began to experiment.

Possibly the funniest test was one of my first in a public swimming pool in Liverpool. Before I started my laps, I decided to try tonglen breathing: that is, to breathe in any unlovingness around me and breathe out metta for my fellow swimmers, much like the trees do with CO2. Less than half an hour later, the tannoy system randomly began to play Band Aid’s Feed the World (Do They Know It’s Christmas?). For any readers too young to remember, this 1984 pop song was recorded by all the top musicians at the time to raise funds for Ethiopian famine relief. If you listen to the lyrics, it’s also one of the most universally compassionate pop songs of all time. Back in the pool, everyone spontaneously started singing along! That impromptu chlorine choir inspired me to keep experimenting.

In that spirit, my current metta experiments have taken me off the cushion and out into the world. I now deliberately choose chaotic environments to practice in, such as shopping malls or road traffic. An anti-terrorism of sorts, releasing loving-kindness on unsuspecting crowds of strangers.

For example, I was recently generating metta in a busy fastfood restaurant when a woman started clearing my table. When I looked up to thank her, I realised she wasn’t an employee but a fellow diner sitting two tables away and mine was the only table she cleared.  Blessing traffic often has motorists spontaneously waving to me or making jokes (You caught anything yet? What are you protesting?) And when I walk down crowded streets and silently say to everyone I pass “may you be happy, may you be free” I more often than not get a shy smile from adults, more knowing ones from children, and very enthusiastic greetings from pets.

In a recent interview, American journalist and author Maria Shriver asked author and life coach Martha Beck about the evolution of her own meditation practice. Martha has clearly been experimenting with embodying the bodhi tree too: she sits in a forest . . . covered in birdseed!

I often hear people express how helpless they feel in the face of the world’s suffering, and completely understand the temptation to retreat from it. However, perhaps the solution is not retreating from life but rather re-entering it more fully? Perhaps it is time to evolve the stereotype of meditation as time apart from daily life to actively incorporating it into daily life? In other words, come out from under the bodhi tree with the lessons its refuge has taught us, and now embody the bodhi tree metta-morphosing our planet one breath at a time? 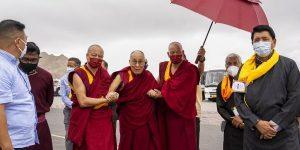