Regular readers of the Lily Pad Sutra have followed the path leading to my metta-morphosis in the articles I have written over the past year. New readers need only this synopsis to catch up: I’ve spent the last eight years cultivating both location-independence and meditation practice, a combination I call lily padding. The upshot of all those jumps?  Evolving a 21st century samadhi state of metta meditation.

Last month, I shared some of my embryonic experiments of converting solely to metta meditation, but I wanted to share a more concrete application of what—on the surface—may simply sound like a nice spiritual concept.

To say I was born a bookworm is an understatement, and the biggest “sacrifice” my first lily padding jump demanded was my books. However, I soon discovered that one of the easiest entries into whatever new community I landed in was joining the local library: becoming a library member satisfied both my need to find out what was going on in my new surroundings, and kept my minimalist’s backpack light.

Allowing the Dharma to extend my reading palette meant walking the shelves of any new library, following its hot-hot cold-cold nudges to borrow an omnivore’s menu of titles across spirituality and finance, science and romance, and health and politics. Interestingly, whenever I’d finish a book, a stranger would inevitably ask me for advice regarding that particular subject matter. Anyone who knows me personally knows I, as a rule, don’t like to give advice, but “prescribing” books available at their local library felt like a comfortable medium between helping and non-attachment. By the second year of jumps, I often found myself in a new place wishing I could direct someone to a book available at the last lily pad’s library. That’s when I discovered stock suggestions, and never looked back!

Public libraries funded by taxpayers’ money usually have facilities for readers to suggest new titles for purchase—a subject voting of sorts—and I soon learned to put in my requests as soon as I landed somewhere new, almost anticipating the questions I might get from the people I was about to meet.

Some of my favourite books the Dharma asked me to “plant” are gentle and humorous introductions to mindfulness and Buddhism for complete beginners:

The relentless search for high self-esteem has become a virtual religion; and a tyrannical one at that. Fortunately, there is an alternative to self-esteem that many psychologists believe is a better and more effective path to happiness: self-compassion. Self-compassion steps in precisely when we fall down, allowing us to get up and try again.

Not so much fly-on-the-wall as cat-on-the-sill, this is the warm-hearted tale of a small kitten rescued from the slums of New Delhi who finds herself in a beautiful sanctuary with sweeping views of the snow-capped Himalayas where she encounters Hollywood stars, Buddhist masters, Ivy-league professors, famous philanthropists, and a host of other people who come visiting His Holiness. Each encounter offers a fresh insight into finding happiness and meaning in the midst of a life of busy-ness and challenge.

The Tao of Pooh & The Te of Piglet by Benjamin Hoff

Winnie-the-Pooh's Way of doing things seems strangely close to the ancient principle of Taoist philosophy, while Piglet exhibits the very important principle in Taoism of the Te, meaning Virtue of the Small. The author's explanations of Taoism and Te through Pooh and Piglet show that this is not an ancient and remote philosophy but something that you can use, here and now.

Less obvious were the book seeds metta asked me to sow. “May all sentient beings be happy, be peaceful, be free” is a nice spiritual idea, but what concrete forms can it take in day-to-day life?

Interfaith teachings often quote the Golden Rule—the principle of treating others as one would wish to be treate—as the thread connecting all faiths. The past eight years of following metta’s inner hot-hot cold-cold nudges, exploring every subject under the sun, I found the Golden Rule’s thread also wove across subjects. 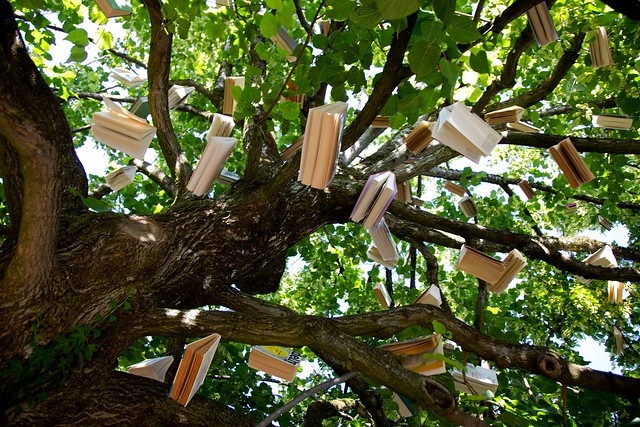 The most surprising of these was business.

One of the growing trends in psychology circles is the study and cultivation of prosocial behaviours; any voluntary behaviour intended to benefit others. And currently the biggest trend in new age teachings is unity consciousness; thinking and then acting in ways that unite us to ourselves, others, and nature. These trends translate more concretely into what financial circles call social enterprise or a triple bottom line (social, environmental, and financial).

My own metta homeschooling-of-sorts has led me to call it prosocial profit; transcending beyond the standard for-profit and non-profit school-of-thought to include any new way of profit-making that benefits (or at least doesn’t harm) all sentient beings. And so, wherever I land, I now sow metta book seeds where they’re least expected. Not the mind-body-spirit section, but the business shelf!

Some of my favourites include:

A Bigger Prize: When No One Wins Unless Everyone Wins by Margaret Heffernan

While the rest of the world remains mired in pitiless sniping, racing to the bottom, the future belongs to the people and companies who have learned that they are greater working together than against one another. Some call that soft but it’s harder than anything they’ve done before. They are the real winners, sharing a bigger prize.

Give and Take: Why Helping Others Drives Our Success by Adam Grant

Amazingly, those who succeed (not only personally but for their clients and companies) don’t take or match. They give. In a world in which so many takers such as Bernard Madoff and Raj Rajaratnam have ruined lives and reputations, this book will reassure readers that the real power lies in becoming a giver.

Sacred Economics: Money, Gift and Society in the Age of Transition by Charles Eisenstein

This book traces the history of money from ancient gift economies to modern capitalism, revealing how the money system has contributed to alienation, competition, and scarcity, destroyed community, and necessitated endless growth. Today, these trends have reached their extreme—but in the wake of their collapse, we may find great opportunity to transition to a more connected, ecological, and sustainable way of being.

The Mesh: Why the Future of Business is Sharing by Lisa Gansky

Most businesses follow the same basic formula: create a product or service, sell it, and collect money. Mesh businesses throw this model out the window. Instead, these companies use social media, wireless networks, and data crunched from every available source to provide people with goods and services at the exact moment they need them, without the burden and expense of owning them outright.

The Soul of Money: Transforming Your Relationship with Money and Life by Lynne Twist

This book demonstrates how we can replace feelings of scarcity, guilt, and burden with experiences of sufficiency, freedom, and purpose. It asks us to step back, to examine our relationship with money, to assess our connection with core human values, to change this relationship and, in so doing, to transform our lives.

As far as I’m aware, only Lynne Twist openly talks about her meditation practice; however, when you read any of these titles yourself, you’ll notice metta fingerprints all over the ideas, research findings, and new ways of doing business they contain. Some fifty jumps and over a thousand stock suggestions later, I like to think these metta book seeds sown have found their way into the hearts and minds ready to cultivate them in new and unique ways . . . encouraging a biblio-biodiversity of sorts.

Interestingly, I once received an email from the head of the library service where I was a member long enough to order some 80 new titles. They wrote to thank me for justifying next year’s stock spending budget and report that every book I had requested was flying off the shelves . . . what exactly was my secret in knowing what readers wanted?

Perhaps you’ve heard the expression “if all you have is a hammer, everything looks like a nail”?  My metta-morphosis has had the opposite effect. Widening my reading palette to drop all manner of assumed dualities has opened my eyes to the many, many forms of the Golden Rule and loving kindness seeds growing in the unlikeliest of places . . . like the buy & sell notice board at a grocery store just last week! 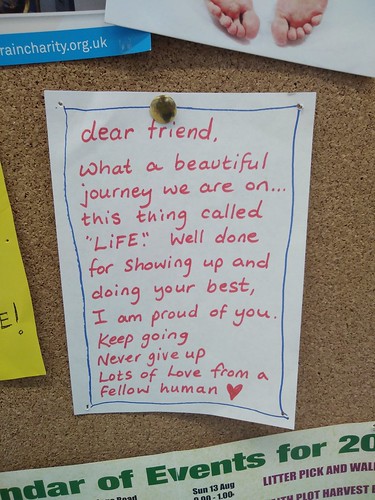 Literature as a Way of Living, Part One
Awareness and Compassion: The New Frontier in Business Leadership
The Impossibility of Outsourcing Happiness
Sustainable Change Management: Serenity, Courage, and Wisdom