I live life as an ongoing experiment, and—not unlike the ever hopeful and hapless Beaker of The Muppets franchise—willingly play the Dharma's guinea pig whenever possible. 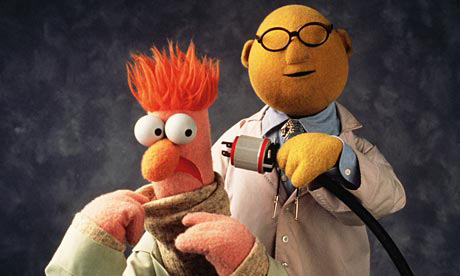 Beaker and Bunsen from The Muppets franchise. From jimhillmedia.com

Over the years, I've tried many different meditation techniques and traditions: some suited me better than others, and some I simply outgrew. The one that came the most naturally to me and that I’m still experimenting with is generating metta. Rather than treating metta as an afterthought to a more traditional sitting or separating my day into mountaintop and marketplace hours, I endeavour to live metta. Bunsen and Beaker of The Muppets. From vignette.wikia.nocookie.net

Welcome dear readers to a new year and a new column, Living Metta, which explores the weird and wonderful ways of living metta in everyday life. I hope my experimenting will make you laugh, make you think, and perhaps make metta scientists-of-sorts of you too.

I'll start with a background story for context. Two summers ago, I worked a season as a live-in team member at a youth hostel. During my first week, my new co-workers invited me to join their weekly poker game. I was torn: part of me wanted to show willingness to be part of the new team, and part of me was already ready for bed. My compromise? Join them for an hour or so and then make my excuses.

When I felt my eyes drooping, I simply went all in and pushed my entire stake into the middle of the table in the hope of losing it all so the others could continue. As nobody at the table knew me very well yet, they assumed I was bluffing. To everyone’s utter surprise, I won the entire pot! And try as I might to give away my winnings so that I could finally head to bed, I continued to win. In the end, it was the others who called it a night . . . and called me “All In” for the rest of the summer.

Something similar happened a few years ago when I set the conscious intention to go “all in” living metta. These days, when I'm faced with situations that anger, annoy, baffle, confuse, or exhaust me—rather than attempt to tackle them myself—I hand metta “dealer’s choice” instead . . . For any readers who remember the original Mary Poppins film (or enjoyed the recent sequel), you'll perhaps understand what I mean by rewording her famous song A Spoon Full of Sugar:

In every job that must be done, there is an element of fun.
You find the fun and snap! the job’s a game.
And every task you undertake becomes a piece of cake.
A lark! A spree! It's very clear to see that
a spoonful of metta helps the medicine go down.

I start my day generating metta for all the sentient beings I'll encounter. The element of fun is discovering where a spoonful of metta might be needed after I step out the front door. On one early morning walking to work, I came across a seagull with an injured wing windmilling its way across one of Liverpool’s busiest city roads. My first instinct was to try and shoo it to safety on the pavement so it wouldn’t be hit by a passing car or cause a road accident.

Well, this particular angry bird was having none of that.

So instead I stayed in the middle of the road with it as best I could to shield it from oncoming traffic and pulled out my phone wondering who on earth to call for help at 6am on a Sunday. A quick search online brought up an emergency number for the Royal Society for the Protection of Birds and—on a wing and a prayer—I called.

Amazingly, someone answered and promised a local volunteer would be with me in half an hour if I was willing to stay put until then.

As relieved as I was to know help was on its way, a half an hour in the middle of a busy city road with a restless, injured seagull feels much longer than 30 minutes. I remembered one of my favourite books as a child, Richard Bach’s Jonathan Livingston Seagull written from the point of view of a seagull, and silently named my avian patient Jonathan. Traffic was increasing and all I could realistically do was wave my own arms in the air to redirect cars and delivery trucks, generate metta for Jonathan, and hope for the best. Interestingly, Jonathan immediately stopped flapping, dragged itself over to my feet, and calmly lay its head on my right shoe like a pillow.

Passers-by only saw me randomly playing traffic police until they looked downwards, and slowed down to point out the obvious: “You know there's a bird on your foot, love?” I’d grin, look down in mock surprise, and thank them as if I hadn’t noticed. More cynical souls shook their heads and told me not to bother as no one would care enough to come help. I’d smile, and assure them that an RSPB volunteer was on their way.

A lot of laughs and eye rolls later, a van pulled up and out jumped a woman with a cardboard carrier box. She approached us, looked down at a resting Jonathan in surprise, and said, “In all my years of doing this, I’ve never seen an injured bird do THAT.” She then pulled on some surgical gloves, and braced herself as she explained that getting an injured bird into a carrier box was usually the hardest part as—like drowning victims—their first instinct is to fight their rescuers.

Jonathan remained peaceful, and allowed itself to be scooped up without fuss. The woman closed the carrier box, smiled at me, shook her head, and asked, “What are you, a bird whisperer or something?”

While I can’t claim to be that, maybe the willingness to be “all in” living metta is its own superpower?  Or, in the words of another Mary Poppins song (and Walt Disney’s personal favourite of all)—Feed the Birds—about feeding the birds outside St. Paul’s Cathedral:

All around the cathedral the saints and apostles look down as she sells her wares.
Although you can't see it, you know they are smiling each time someone shows that he cares. Mary Poppins as a Zen Monk (The New York Times)