A suburgan (stupa) on the way to Burgan Izi (the Footprint of Buddha). Image courtesy of the author

Tuva is a remote Russian republic in southern Siberia, the capital of which, Kyzyl, lies in the geographic heart of Asia. The Tuvans are a Turkic ethnic group, historically known as one of the Uriankhai nomadic, yurt-dwelling tribes. They are traditionally adherents of Tibetan Buddhism, which spread to Tuva via Mongolia, absorbing the local Turkic animistic shamanism known as Tengrism (a name that derives from the region’s eternal blue sky, or tengri). Last September, I had the good fortune to visit Kyzyl, where I participated in the international conference “Buddhism in the Third Millennium: Trends and Prospects for Development.”

Tibetan Buddhism is considered to be a blending of Bön, the shamanic traditions of ancient Tibet with the teachings of Buddhism, which first arrived from India in the 5th century. This may account for the peaceful coexistence of both spiritual traditions in the Siberian Republic of Tuva until today. 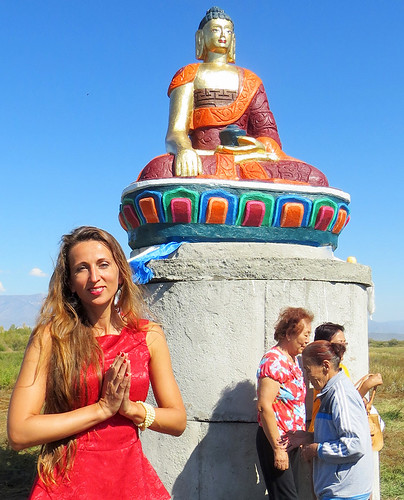 The author in front of a statue of Shakyamuni Buddha near the
village of Pestunovka in Ulug-Khem District. Image courtesy of
the author An interesting example of this convergence of Buddhism and shamanism in Tuva is the life of Lopsan Chamzy, the khamby lama (senior lama) of the republic. Born in 1976 in Kungurtug, southeast Tuva, Lopsan Chamzy was raised in a family of shamans. His grandmother was a powerful shaman during a period when, according to him, there were many strong shamans: “Nowadays we have many shamans, but their quality is very low. Usually people say that when many strong shamans are present, that time is very bad for society.”

Lopsan Chamzy does not see any contradiction between the practices of Buddhists and shamans in Tuva. “The goal of Buddhist lamas and shamans is the same—to help people as much as they can,” he observed. “Of course, we have different methods, but the goal is the same: when Tuvans have problems, they can meet shamans to ask for their help, or they can go to a monastery to receive advice based on Buddhist philosophy. I respect the shamans and maintain a very good dialogue with them. Although we use different methodologies, there are no contradictions between us.” A suburgan for Green Tara at the village of Pestunovka in Ulug-Khem District. Image courtesy of the author

The Khamby Lama acknowledged that there are a number of shamans who assert that Buddhism is not the traditional religion of Tuva and that the original beliefs of the local people were based mainly on shamanism. These shamans advise Tuvans not to visit monasteries and to avoid Buddhist rituals. Lopsan Chamzy counters that in Chaa-Kholsky, one of the republic’s 17 kozhuuns (districts), archeological evidence indicates that Buddhism existed in Tuva in the 4th century. With this evidence, Lopsan Chamzy aims to show that Buddhism is the traditional religion of Tuvan people. 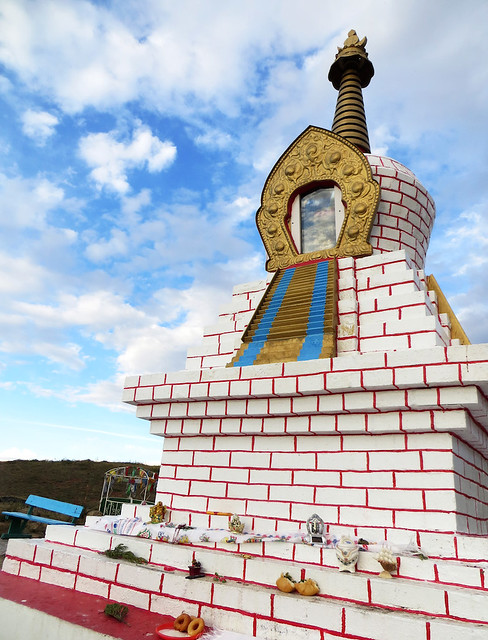 Suburgan of Buddha Shakyamuni, built by Shiwalha Rinpoche at Burgan Izi.
Image courtesy of the author

On the final day of my visit to Tuva, I was able to visit a lama who practices Tibetan medicine at his Dharma center in Kyzyl, and a female shaman, who is the president of an organization of Tuvan shamans called Dyngyr (named after a shamanic drum). Both I and my interpreter Victor Sandakpan, who helped me so much during the trip, were surprised that both the lama and the shaman offered the same advice regarding my health.

The lama, Kherel-ool Ayan Vyacheslavovich or, more simply, Lama Ayan, studied Buddhist philosophy at Drepung Gomang Monastery in southern India, where Lopsan Chamzy also completed his education. Lama Ayan completed his medical training at the Tibetan Medical and Astro-science Institute (Men-Tsee-Khang) in Dharamsala. Lama Ayan confirmed the strong connection between Buddhism and shamanism in Tuva, observing: “Our mentality is strongly influenced by both Buddhism and shamanism; they are mixed in our culture.” 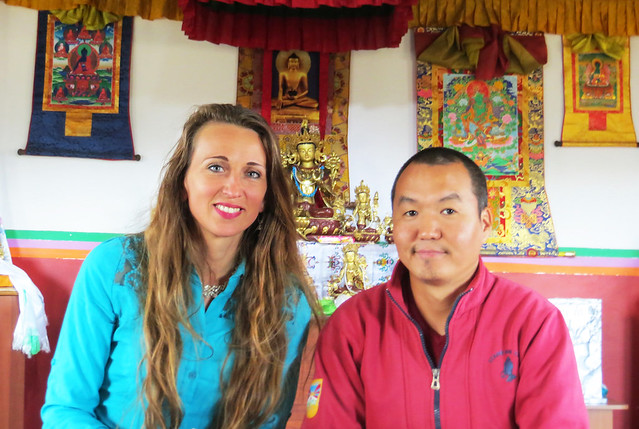 The author with Lama Kherel-ool Ayan Vyacheslavovich. Image courtesy of the author

After my medical checkup, Lama Ayan emphasized the importance of Buddhist teachings to his practice as a doctor. In Tibetan medicine, in order to properly treat a patient, the doctor does not only use medicine: “I need to perform astrological calculations in order to decide what kind of prayers and rituals are necessary for the patients,” he explained. “I also give advice according to the teachings of the Buddha and especially according to Buddhist psychology. I try to explain how patients need to examine their problems and realize the nature of samsara, how important it is to be compassionate, to have faith, and also to deal with negative emotions in a spiritual way.” The holy site of Burgan Izi. Image courtesy of the author

Lama Ayan highlighted an important characteristic of Buddhism in Tuva: “Nowadays, young Tuvans start to follow the Buddhist path with a higher level of awareness. We have started teaching Buddhism in schools and this has helped to develop the Buddhadharma in our republic,” he said. “Older people here have strong faith and they don’t need explanations concerning the philosophy.” Even though there are differences in the perception of Buddhism between the younger and the older generations, there is a strong spiritual tradition in Tuva that connects people, whether they follow Buddhism or shamanism. This natural spirituality originates in the land, which is inhabited by the spirits of their ancestors; every tree, every spring of water is considered sacred. 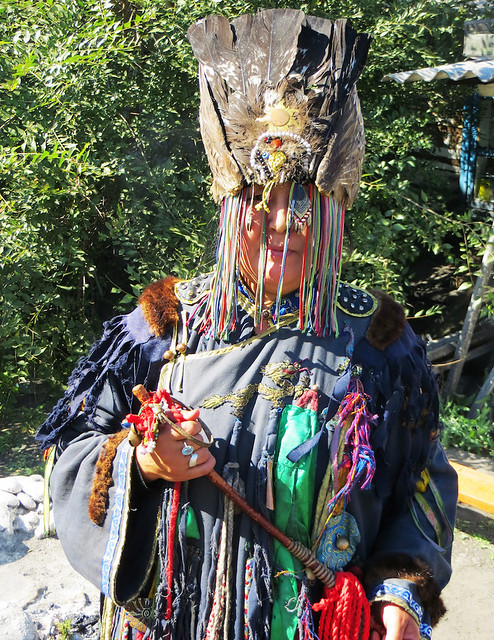 The first thing that the female shaman Saryg-ool Sara Kaadyr-oolovnais shared with me was also about the sacred nature of the land. “All of us Tuvans live in sacred places. Tuva is an amazing place for spiritual growth and when people with different problems come here, they find relief and something changes in their life,” she noted. “We live in a world of spirits and there are many sacred places in our republic that have spirits as hosts.” She explained that Tuvans continue to sanctify new sites where it was previously impossible to do so because of the old Communist regime. Burgan Izi— the Footprint of Buddha. Image courtesy of the author

Shamans are considered messengers and intermediaries between the human world and the world of spirits. Through altered states of consciousness, they are able to enter supernatural dimensions to find solutions to various problems afflicting a person or a community, although quite often this is not an easy task. Saryg-ool Sara explained some the difficulties of the shaman’s life: “I never wanted to become a shaman because I saw that the life of a shaman is very difficult,” she recalled. “My grandfather was a very strong shaman and I saw that it is very difficult to predict the future and to feel many things that ordinary people cannot feel. It is very difficult to become a real shaman. You need to master yourself, to develop the qualities that you have inherited, and to make the spirits your friends.” 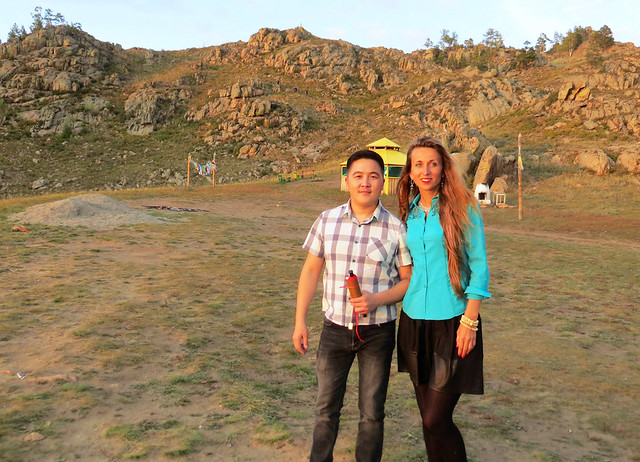 The author with interpreter Victor Sandakpan at Burgan Izi. Image courtesy of the author

Saryg-ool Sara’s final words to me were simple, yet profound: “It is normal for everyone to have problems, but we can change everything in our life. We should enjoy life and appreciate every moment.” I heard these words in the melodic Tuvan language, which belongs to the Turkic linguistic family, and I was able to understand their meaning thanks to my interpreter Victor, who transmitted the messages between different languages in the same way that the shamans transmit messages between the worlds of the people and of the spirits. Victor’s humble presence during the meetings with the lamas and the shaman showed me that spirituality is beyond religion, and in the simple act of kindness and care, he gave respect to the faith traditions with a sharp intelligence and awareness. The vast expanse of Burgan Izi. Image courtesy of the author

Victor then brought me to one of the holiest sites in Tuva, where people can offer prayers and wishes: Burgan Izi (Footprint of Buddha), located between the villages of Tselinnoe and Shambalyg. In 2013, Shiwalha Rinpoche, a Tibetan lama of the Gelug School, built a suburgan (stupa) to Shakyamuni Buddha, symbolizing his descent from Tushita Heaven. Contemplating at the vast space of this holy site, immersed in the complete silence there, I realized that the stone footprint of the Buddha is simply a reminder of the real traces of the Awakened One that are imprinted in our minds.

Russia’s Golden Triangle of Buddhism
International Conference in Tuva Marks Revival of Buddhism in Central Asia
Connecting Art, Women, and Spirituality, with Lyudmila Klasanova of Sofia University
Kalmykia: Lore and Memory at the Far Side of the Buddhist World
The Kalmyk Restoration: Telo Tulku Rinpoche on a Russian Republic’s Buddhist Revival
Emptiness and Fullness: Windows into Buddhist and Russian Orthodox Dialogue