Stupa of Shakyamuni Buddha, symbolizing his descent from Tushita Heaven. Built by Shiwalha Rinpoche in Burgan Izi (Footprint of Buddha), between the villages of Tselinnoe and Shambalyg in Tuva. Image courtesy of the author

Buddhism first came to Russia in the 17th century and became firmly established mainly in three Russian republics, Buryatia, Kalmykia, and Tuva, where it had a tremendous impact on cultural development. Since then, the Buddhadharma has become widespread and can be found in many parts of Russia.

I was fortunate to have an opportunity to visit all three Buddhist republics while participating in three international Buddhist conferences: “Contemporary Buddhist Art: Traditions and Innovations” in Ulan-Ude, Buryatia (25–26 July 2013), “Buddhism in Dialogue between Eastern and Western Cultures” in Elista, Kalmykia (20–23 September 2015), and “Buddhism in the Third Millennium: Trends and Prospects for Development” in Kyzyl, Tuva (8–9 September 2016). The author standing in front of the entrance to the newly rebuilt Buddhist temple Ustuu-Khuree in Chadan, Tuva. Image courtesy of the author

Buryatia, Kalmykia, and Tuva form a kind of holy triangle in Russia where Buddhism’s precious heritage is well preserved. As a Bulgarian who grew up under a communist regime, my overall impression from visiting these regions was a feeling of being very much at home, witnessing traces of our common communist history, coupled with the hospitality and warmth of the people I encountered, and the sacred spirit of the Buddhadharma that permeates these lands.

Buryatia is located toward the south of Siberia, along the eastern shore of Lake Baikal. The Buryats are a subgroup of the Mongols and are the largest indigenous group in Siberia. Kalmykia is located in southwestern Russia. The Kalmyks are descendants of the westernmost group of Mongols, known as Oirats, and the only people of Europe whose national religion is Buddhism. Tuva lies in southern Siberia and in its capital is believed by many Tuvans to be the geographical center of Asia. The Tuvan people are one of two Turkic ethnic groups who practice Tibetan Buddhism (the other being the Uyghurs, who live primarily in Sunan Uyghurs Autonomous County in the Chinese province of Gansu). The largest Buddhist temple in Europe—the Golden Abode of Shakyamuni Buddha in Elista, Kalmykia. Image courtesy of the author

At the beginning of 17th century, Buddhism spread north from Mongolia to Buryatia. During the same century, the Kalmyks migrated to the region between the Volga and Don rivers, and north to the Caspian Sea, bringing their own Buddhist tradition. Buddhism reached Tuva in the 18th century, again coming from Mongolia (although some hold that it arrived there with the Uyghurs in the 9th century). Russia is popularly believed to have officially recognized Buddhism in 1741 when one of the country’s most popular monarchs, Empress Elisabeth Petrovna (r. 1741–62), officially recognized the Buddhist tradition in Buryatia. Another eminent female leader of Russia, the empress Catherine II (r. 1762–96), also known as Catherine the Great, allowed Buddhists in Russia to choose their own spiritual leader. Until then, all Buddhists in the region had looked to senior monastics in Tibet or Mongolia for spiritual leadership. 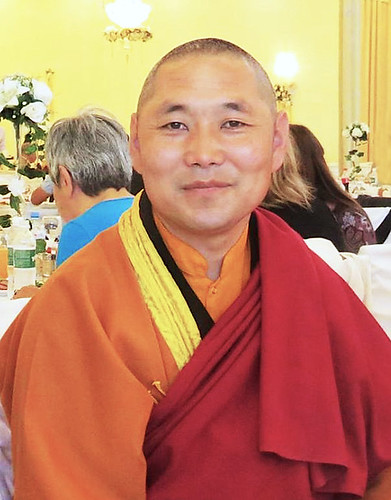 The title given to monastic leaders and senior teachers in Mongolia and Russia is khambo lama, derived from the Tibetan academic title khenpo. The current spiritual leader of the Russian Federation’s Buddhists and the most senior lama in Buryatia is the 24th Pandito Khambo Lama Damba Badmayevich Ayusheev (born in 1962 in the village of Bursomon in Zabaykalsky Krai). The most senior lama in Tuva (khamby lama, in the local language) is Lopsan Chamzy (born in 1976 in Kungurtug, southeast Tuva). The head lama of the Kalmyk people, or shadjin lama, is Telo Tulku Rinpoche (born 1972 in Philadelphia, PA), who is also the honorary representative of His Holiness the Dalai Lama for Russia, Mongolia, and the members of the Commonwealth of Independent States (CIS). The Stupa of Enlightenment in Lagansky District, Kalmykia. Image courtesy of the author

The most popular form of Buddhism in Russia is esoteric Vajrayana, mainly Tibetan Buddhism. Gelug, founded by Je Tsongkhapa (1357–1419), the newest of the four major schools of Tibetan Buddhism, is the most widely practiced, but there is also a strong influence from the oldest tradition, Nyingma, and, to a significantly lesser degree, the Kagyu and Sakya schools.

Russian Buddhists revere mainly Shakyamuni Buddha, as well as Je Tsongkhapa (1357–1419) and other Gelug teachers. The monastic practices in the region derive from the heart of Vajrayana Buddhism, whereas the philosophical and ethical aspects of local Buddhist traditions do not differ significantly from the fundamental aspects of Mahayana Buddhism. As followers of Tibetan Buddhism, Russian Buddhists regard the Dalai Lama as their foremost spiritual leader. His Holiness made his first visit to the Soviet Union in 1979, and visited Buryatia in 1991 and 1992; Kalmykia in 1991, 1992, and 2004; and Tuva in 1992. Since his most recent visit to the region in 2004, the Russian government has turned down the Dalai Lama’s subsequent visa applications.

During the recent conference in Tuva, I had the opportunity to discuss differences in the Buddhist practices of the three republics with Lopsan Chamzy. Born Bayir-ool Serenovich Shyyrap, he began his Buddhist training in 1994 when he moved from his motherland Kungurtug to a Dharma center in the Tuvan capital, Kyzyl. After two years of study, he completed his education at Drepung Gomang Monastery in southern India. In 2014, after the death of the Fifth Khamby Lama Suldum Bashky, Lobsan Chamzy became the sixth senior lama of Tuva and dedicated his work to the revival of the Buddhism in the republic. According to the khamby lama of Tuva, there are few differences between Buddhism in the three republics. However, he noted that the religion is developing much more rapidly in Buryatia and Kalmykia than in Tuva as a result of the lack of spiritual leaders in Tuva after the fall of the communist regime: “The communist regime existed across Russia, including Kalmykia and Buryatia, but after the collapse of communism these two republics had powerful spiritual leaders and for this reason Buddhism was able survive to reach the period of renaissance we see now,” he said. “In Tuva, meanwhile, Buddhist teachers have always had very close relationships with lamas in Kalmykia and Buryatia.”

Lobsan Chamzy also observed that traditional culture and language have been well preserved in Tuva, compared with Buryatia and Kalmykia: “We still know our language at a very good level and we do our best to preserve our culture. This is one of the reasons for the strong development of Buddhism in Tuva. If we talk about Buryat and Kalmyk people, we can see that most of them do not know their [traditional] language well and they seldom speak it.” The Golden Stupa at Datsan Rinpoche Bagsha in Ulan-Ude, Buryatia. Image courtesy of the author

Buddhism possesses universal values, common not only to the Buddhist republics of Russia, but also in a global context. Lobsan Chamzy expressed some of them: “Buddhism teaches us how to be a good people and live lives that are beneficial for others. It provides answers to fundamental questions, such as how to deal with our negative emotions and live in peace.” He also underlines the essence of any religious practice: “I will never claim that one religion is better than another. The main point when you practice any religion is to open your mind.”

International Conference in Tuva Marks Revival of Buddhism in Central Asia
Connecting Art, Women, and Spirituality, with Lyudmila Klasanova of Sofia University
Kalmykia: Lore and Memory at the Far Side of the Buddhist World
The Kalmyk Restoration: Telo Tulku Rinpoche on a Russian Republic’s Buddhist Revival
Emptiness and Fullness: Windows into Buddhist and Russian Orthodox Dialogue