Lucy with her painting of White Tara during the opening of her exhibition Mirror of the Heart, in the Alma Mater Gallery of Sofia University. Image courtesy of the author

Aside from the occasional visiting Rinpoche, few are in a position to represent and transmit the Vajrayana tradition in the nations of Eastern Europe. Bulgaria, however, is home to one such individual in the form of my good friend Lyudmila Klasanova (or, as many associates call her, Lucy), a truly charismatic woman who is making a tangible difference in the spiritual and intellectual lives of those around her.

Lucy is a practitioner in the Palyul Nyingma school whose Dharma name is Tsering Dolma. She completed her PhD in 2014 and now plays several distinct roles in her hometown of Sofia: a professor of Buddhist Studies at Sofia University (where she did her doctorate), a curator of Asian art at Sofia’s National Art Gallery, and a yoga teacher. The title of Lucy’s soon-to-be-published thesis captures what has occupied her interests for years: "Female Figure [sic] in the Buddhist Tradition of India and Tibet." “I spent seven years studying and writing about women in early Buddhism and the Mahayana and Vajrayana traditions. This included divine figures such as goddesses, female bodhisattvas, and dakini, as well as historical women in Buddhist India and Tibet. I also came to encounter the painful side of the female journey in Buddhism and the path’s struggles and challenges,” she says. 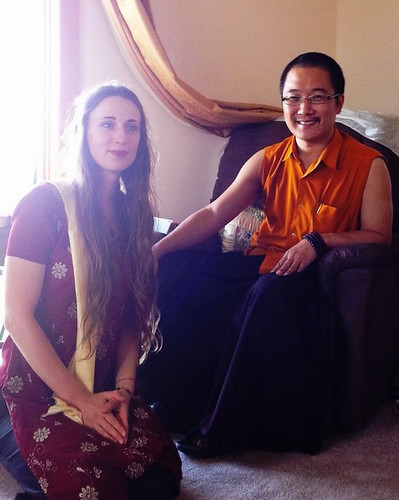 Lucy with His Holiness Karma Kuchen Rinpoche, the current
head of the Palyul lineage. Image courtesy of the author

Lucy is a frequent presence in Sofia’s cultural life—I always enjoy seeing photos from the artistic or scholarly events she participates in with the Indian or Mongolian ambassadors, which comes about mainly from her activities at the National Art Gallery and her academic work. Often, the two complement each other. “As an art curator I organize exhibitions and educational programs about the cultural heritage of different countries in Asia,” she tells me. “I often bring my students from Sofia University to the gallery, which gives them a good opportunity to explore the world of art and expand their knowledge about Buddhism. We have different projects with students at the gallery, and I feel happy to combine my work there with my teaching at the university.”

Lucy started practicing Hatha Yoga in the Satyananda tradition in 1995, and soon decided to focus on Kundalini Yoga. In 2006, she became a Kundalini Yoga instructor under La Fédération Française de Kundalini Yoga and began teaching her own classes. Lucy is a creative teacher: in addition to combining yoga with music and dance, she holds her classes and retreats at places of natural beauty or sacred significance when the opportunity arises. On one yoga weekend last fall, she took her class to practice in the cleansing environment of southwest Bulgaria’s mineral springs, and on another occasion her group practiced on the island of Samothraki in the north Aegean Sea, where nymphs were once believed to dwell.

In addition to her yoga practice, Vajrayana Buddhism has formed the core of Lucy’s inner life for more than a decade. As with many others, the turning point came when she experienced the death of a loved one. “Seeing the suffering of sickness and death in someone close to me compelled me to look for answers about the eternal questions. What is death? Why do people suffer so much? How can I help dying people and those who hurt?” she reflects. “One day I just walked into a bookstore and one book got my attention. Strangely, when I picked it up I realized that I had dreamed about this book a few days before.” Lucy with Palyul monks and nuns in southern India. Image courtesy of the author

That book was what is popularly known in the West as the Tibetan Book of the Dead, or more properly, the Bardo Thodol (Liberation through hearing during the intermediate state). It had been translated from Tibetan into Bulgarian by the director of Sofia University’s Center of Eastern Languages and Cultures, Alexander Fedotoff. A graduate of the Faculty of Oriental Studies at Saint Petersburg State University, Fedotoff came to exert a significant scholarly influence on Lyudmila. Lucy recalls, “After reading the book, I went to the university to meet Professor Fedotoff, and he had just started a course about the Tibetan Book of the Dead. In the next few years, I attended his courses about Tibet and Tibetan Buddhism. In 2003, I met His Holiness Penor Rinpoche in Germany, took Refuge, and started Dharma practice in the Palyul Nyingma tradition.”

She received most of her Buddhist teachings in India, Taiwan, the US, and Western Europe. Lucy fondly recalls her time practicing alongside the monks and nuns of Namdroling Monastery in the south of India. “It was necessary to travel in order to study and practice Dharma, which is not easy in Bulgaria and Eastern Europe. Buddhism is becoming popular in this region, but it is a very small minority religion,” she says. “Buddhist teachers come to Bulgaria quite rarely, usually just to teach, and none of them stay permanently. There are very few Dharma centers and only one stupa, which was built last year.” Lucy at the Seven Rila Lakes, Bulgaria. Image courtesy of the author

The way in which her intellectual journey in the academy has complemented her spiritual journey in the Dharma is somewhat similar to my own experience. “University was part of my relationship with Buddhism from the start,” she tells me. “During my PhD, I started to teach in Sofia University with the kind help of Professor Fedotoff, who had become my tutor. He asked me to teach on some of the courses that he was giving: Buddhist art, Tibetan culture, and religions of East Asia. I was lucky not only to receive his knowledge, but also to be inspired by his brilliant pedagogy and experience as a lecturer at other universities. I also started to teach a course about femininity in Buddhism based on my doctoral research.”

Founded on her interest in Buddhist art, painting has been a bridge to her fascination with Buddhist women. “My attraction to the subject of Buddhist women was a gradual process that started with the image of the female Buddha Tara. I painted an image of White and Green Tara just before meeting His Holiness Penor Rinpoche. I felt connected with the nature of Tara, especially after receiving my Refuge name from him [Tsering Dolma means ‘Tara of Long Life’]. I started to study the Buddhist goddesses, and wrote my master’s thesis about the female image in Tibetan iconography: Tara, Prajnaparamita, and different forms of dakini,” she says.

Lucy views sacred art as a kind of middle path between academic research and spiritual practice. Like many artists, she talks of her interest in painting (Buddhist deities in particular) as an act that opens her “inner eye” to something that is “beyond explanation or analysis”—an expression of the heart. She again invokes the connection of the emotions and the intellect by exploring images aimed at depicting the divine and truth. “This process is perpetual, like the endless play of form and emptiness,” she suggests. “It is a union of the visible and invisible, or matter and spirit.” Lucy teaching yoga in the Rila Mountains of northwestern Bulgaria. Image courtesy of the author

Although her interests as a scholar are constantly evolving, Lucy “feels closer,” in her words, to the tangible assurance of art and painting than to the abstractions of philosophy. I believe this is due to her experience of emotional pain as something quite real, eliciting a similarly visceral response, even as the teachings of Buddhism urge detachment and tranquillity. “I am trying to live with awareness and trust that everything is right at that very moment and that it is what it is, here and now. I am learning to let go of what has to go and accept impermanence as a natural process. But instead of theorizing about the philosophy of life and the meaning of love, happiness, liberation, or enlightenment, it is more important to be able to experience them and live life to our full potential.”