“Whoever you are, no matter how lonely,
the world offers itself to your imagination,
calls to you like Wild Geese, harsh and exciting —
over and over announcing your place
in the family of things”

The final stanza of Wild Geese by Mary Oliver.

Wild geese live for part of the year near my home on the banks of the River Avon, in Worcestershire, England. Several hundred massing together in the autumn as they practice and prepare for their long flight to warmer climes. It’s not just the sight of them flying over my house in their familiar V-formation, it’s the sound they make. I love to hear it; I love hearing them calling to each other—maintaining contact through their beautiful gravelly voices—loud and strong, urging, cajoling, and encouraging each other. If they’re low enough, and just occasionally they are, I can hear the sound of their wings pressing against the air—always a magical moment.

Christians following the Celtic tradition see in wild geese many attributes of God. Geese are faithful both to their partners (pairing up for life), and to the wider group, supporting each other during their long flights. They can be fierce (they make excellent “guard dogs” for country dwellers), yet tender toward their own, and they’re un-tamable and mysterious.

This faithful, fierce, tender, untamable, and mysterious bird that knows no limits and has no boundaries, is to the Celtic Christian a revelation of the presence of God. Perhaps this was the reason why Fr. Patrick Eastman, a retired Roman Catholic Priest, chose the name for the Zen sangha he set up in the UK some 10 years ago.

The Wild Goose Zen Sangha (WGZS), of which I’m a member, meets weekly to practice at Holland House Christian Retreat and Conference Centre. Patrick “Kundo” Eastman is a Roshi in the lineage of the White Plum Asangha, and the WGZS is growing steadily across the UK. 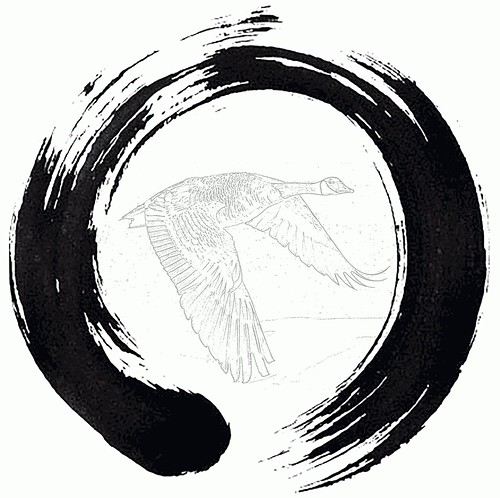 Although an Anglican priest, my spiritual tradition is grounded in the natural world. Whether it was gazing across the vast sea on my annual summer holiday as a small boy, or walking the fields and woods of my home in Worcestershire, it is always here—face to face with the dark wood, glittering stream, and green field—that I feel a deep connection to the “otherness” of life. The medium of the natural world as a doorway into the spiritual, is of course, the Celtic way, for the Celts call the Creation “the big book.” The Word of God not written in a lexicon, but in its simple “being-ness.” The way the Creation is, told them something of the way the Creator is, and Columbanus, the 6th century Irish teacher taught attentiveness to the creatures and natural elements because they still “remembered the sacred rhythm of the earth.” (Newell 2008)

Why is this so important? Because paying attention reveals the doorway to reality. Such attentiveness dissolves the fantasies and delusions of our unconscious habitual minds, clearing the way for the simple reality of “what is.”

Both Celts and Zen Buddhists are more interested in direct experience than abstract ideas. Early Celtic spirituality provides a “welcome change from abstractions and dualisms” (Davies and O'Loughlin 1999) as the Celts looked toward the Creation i.e. form, in order to see beyond form. For them, the incarnation wasn’t simply a one-off event in Christ (although he was understood to be the unique human example), but an ongoing realization of God’s presence (the Word), in all things.

In our Zen practice with the WGZS, we often chant “emptiness is exactly form, form is exactly emptiness . . . all Dharmas are forms of emptiness.” (The Heart Sutra) Form is nothing in itself, it has no substance of its own. Nonetheless, here it is! It can only be “here” because it’s empty of itself, form being a revelation of that which goes beyond but includes form. The Celts would have understood that. For them, the “form” of the wild goose was real but also a “finger pointing at the moon.”

In Zen, when we sit zazen, we practice shikantaza—just sitting—the bare bones of present reality. Not trying to get beyond anything, simply experiencing “just sitting.” It’s the same when making tea, washing dishes, and so on. The practice is about directly experiencing life—without fantasy. When I stand in contemplative prayer watching and listening to the wild geese as they fly over my garden, I simply let them be. I don’t think about them as geese, or as God. I see and hear their forms, and in them my own. Or we might call them “things” just as I, too, am a “thing.” Absolutely form, absolutely empty, absolutely human, absolutely geese, absolutely God.

This is what the wild geese tell me as they fly over my head, announcing my “place in the family of things.”

Ian Spencer served in the Royal Navy and after leaving spent 17 years in the IT industry. After two years full-time study at theological college, Ian was ordained as a priest in the Anglican Church in 2005. Ian is now warden and priest of Holland House Retreat Centre and often runs a variety of retreats in the contemplative tradition of the Christian faith. He is a member of the Wild Goose Zen Sangha and a trained Hatha Yoga teacher. Ian is married and has three daughters, and a dog, Rolo.