The year is coming to an end. A year that has turned the world upside down. And it is still difficult to see clearly what will follow from this ongoing challenge. A submicroscopic agent, the SARS-CoV-2 novel coronavirus, has spread across all continents and changed the lives of every inhabitant on this planet. Change is the only constant in our lives, and the impermanence of all internal and external phenomena is one of the foundations of Buddhist philosophy. So how does the Buddhist teaching help us accept impermanence, the loss of beloved ones, isolation, insecurity, pain, and suffering?

The first teaching given by the Buddha on the Four Noble Truths talks about the suffering that is an innate characteristic of existence in this realm of samsara: birth is suffering, sickness is suffering, old age is suffering, death is suffering; pain, grief, sorrow, lamentation, and despair are suffering. When the whole world is mired in the suffering of sickness and death, and each day and each hour become statistics of the infected and the dead, it is very difficult to sustain inner peace and tranquility. On the other hand, compassion naturally awakens within us as a reaction to our confrontation with endless suffering. Damba Badmayevich Ayusheev, Vladimir Putin, and the heads of various religious concessions in Russia during National Unity Day. From baikal-daily.ru

How has COVID-19 changed the Buddhist world? A year without religious gatherings, without meetings with Buddhist teachers, without pilgrimages. A year of virtual Dharma, virtual sangha, and refuge in digital media, thanks to which many Buddhist communities have remained connected and shared teachings. This situation has been replicated in many countries, including the largest country (by land mass) in the world, Russia, which, at the time of publication, ranked fourth in terms of reported numbers of infected people at 3.07 million,  with 55,107 recorded deaths. The three Buddhist republics in the Russian Federation have also been hit hard by the pandemic: Buryatia had reported 25,345 infections and 581 deaths; Kalmykia 14,592 infections and 200 deaths, and Tuva 14,694 infections and 157 deaths.* Telo Tulku Rinpoche welcomes His Holiness the Dalai Lama at the beginning of the virtual teaching for Russian Buddhists. Photo by Ven. Tenzin Jamphel. From dalailama.com

Many monasteries and Dharma centers throughout Russia continue to run mainly online programs. Buddhist forums, conferences, and exhibitions are also held online. On 4 November, Russia’s National Unity Day, the 24th Pandito Khambo Lama Damba Badmayevich Ayusheev, head lama of the Buryat people and of the Buddhist Traditional Sangha of Russia, held a conversation with President Vladimir Putin during a conference with the heads of various religious concessions in Russia. Ayusheev expressed the readiness of Russian Buddhists to help in the fight against the pandemic with alternative medicines, and noted that Russians must rally together to overcome the coronavirus threat. “We Buddhists are ready to make our contribution to the fight against the epidemic, especially since this has already happened in Russian history, when for thousands of years the proven Buddhist medicine helped in the fight against another epidemic—typhus,” said Ayusheev. (Аригус)

A day after this virtual meeting, another historical event took place in Russia: the traditional teaching for Buddhists in Russia given by His Holiness the Dalai Lama were held online for the first time due to the pandemic.** This year, the program of the Tibetan spiritual leader was attended by more than 5,000 people from 5–7 November. The Dalai Lama’s teaching for Russian Buddhists has been held in India since 2009 at the request of Ven. Elo Rinpoche, the abbot of Datsang Rinpoche Bagsha in Buryatia, and the shadjin lama (head lama) of Kalmykia, Telo Tulku Rinpoche, who is the Dalai Lama’s representative in Russia, Mongolia, and CIS countries, with the support of the kamby lama, the most senior Buddhist monastic in the Republic of Tuva. 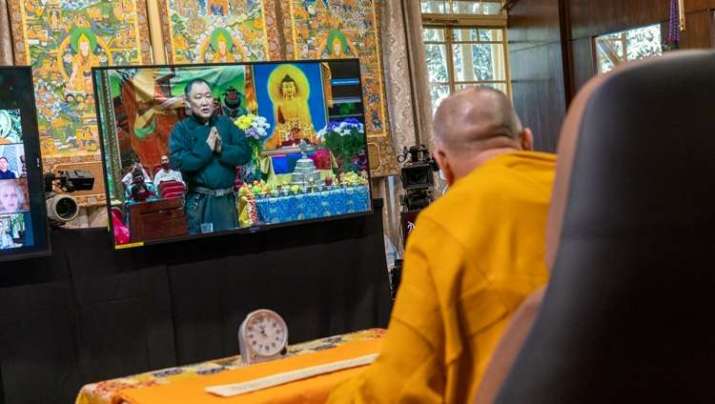 Sholban Kara-ool requests His Holiness the Dalai Lama to name the new temple in Tuva on the second day of the virtual teaching for Russian Buddhists. Photo by Ven. Tenzin Jamphel. From dalailama.com

One of the great losses to Buddhism in Russia as a result of COVID-19 has been the death of the Eighth Kamby Lama Jampel Lodoy, who served as the most senior Buddhist monastic in the Tuva for just seven months.*** He passed away on 23 June in the Tuvan capital Kyzyl. The new Ninth Kamby Lama of the Tuvan people was elected on 4 October and this highly respected position was given to Gelek Natsyk Dorju.**** The enthronement ceremony for the Ninth Kamby Lama took place on 22 November in the national theater of the republic, in compliance with sanitary and epidemiological precautions.

During the ceremony, Telo Tulku Rinpoche presented a letter from the office of His Holiness the Dalai Lama to Sholban Kara-ool, chairman of the Tuvan government, in response to his request to name the new monastery being constructed in the Tuvan capital.***** The request was made by Kara-ool during the online teaching by His Holiness for Russian Buddhists. The name for the new monastery is Tupten Shedrubling. Sholban Kara-ool, who has overcome COVID-19 twice, guided the construction of the temple complex in Tuva. This monastery, blessed by the Dalai Lama, has become a light of hope during the dark period of pandemic, representing what is most necessary: hope and optimism. In a video message provided by the central khurul (monastery) of Kalmykia, the Golden Abode of Shakyamuni Buddha, Telo Tulku Rinpoche spoke of the importance of hope and optimism during this difficult period:

Of course 2020 has been a very difficult year, but I always ask myself: “What year has not been difficult?” Each year has its own problems. There are always times when we endure hardships, and these hardships are not only material, financial, or emotional, they are many other things as well. Nevertheless, we look toward the future, we strive toward the future, we have to work, plan, and set goals for the future. The year 2020 will be the end of a chapter, and then 2021 will begin, and we must continue to move forward.