For Indiana Buddhist Temple member Bruce Allen, the Buddhist path began with a water lily start: “I came to know Indiana Buddhist Temple in a rather serendipitous way. I began visiting for meditation in June of 2011. Just a year earlier, the temple had dug a small water lily pond. I have several water lily tubs on my patio, and each spring they need to be divided. That spring I placed an ad on The Freecycle Network to see if anyone would enjoy some starts. A wonderful temple-goer named Elly responded to the ad, came to pick up the starts, and told me all about the temple.”

Bruce visited, and felt extremely comfortable and at ease. He credits this to the monks: “Our monks are well aware that most Westerners were not raised in the Buddhist tradition, and overlook a lot that might not be accepted back in Sri Lanka. In fact, I would say that this is one of the great strengths of a Theravada temple in the heart of Indiana—fertile ground without cultural baggage whose meaning has been lost in the mists of time.”

Located near the city of Fort Wayne in the northeast part of the state, Indiana Buddhist Temple was founded on 28 June 2003 by Bhante Devananda, who was in Los Angeles when he received an invitation from the Sri Lankan community around Fort Wayne to share the Dhamma. The temple’s stated purpose is “. . . to teach meditation for the local people and through meditation spread loving kindness throughout society.” (Indiana Buddhist Temple) Since that time, the temple has not only grown but thrived, and now has over one thousand members. Temple member Jeff Smith first learned about the temple through the local newspaper, where Bhante Devananda, who serves as the temple’s abbot, had a guest column. This planted the seed for him to eventually attend one of the temple’s meditation nights: “That was in June of 2009. I’ve attended regularly since then,” he told me.

Now, for almost two years Jeff has helped lead the Saturday discussion group on suttas and popular books. “I’ve lately been asked to help lead the actual meditation sessions,” he added. “Mostly I deal with Mindfulness of Breathing-Insight Meditation, but sometimes Metta [“Goodwill”] Meditation as well.”

The temple currently has a regular Monday class on Loving-kindness Meditation (Metta Bhavana), a Thursday class on Mindfulness of Breathing Meditation (Anapanasati Bhavana), and a weekly Saturday class on the Middle-length Discourses (Majjhima Nikaya), which includes the discussion group as well as silent meditation. In addition, monthly meditation classes are held at the Fort Wayne Community Grief Center. 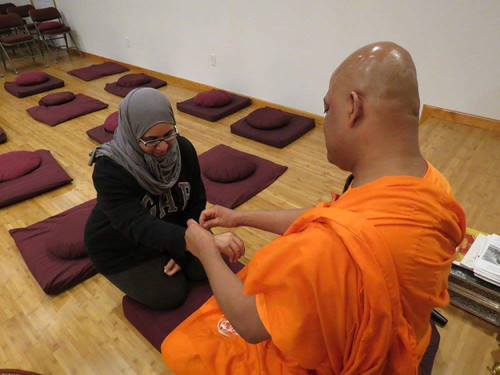 But this does not even begin to describe the temple’s prolific outreach and activities. In 2015 alone, they celebrated Kathina (the annual robe-offering ceremony) at the temple and all-night Pirith protection ceremonies at Buddhist temples in a number of American cities; participated in the local Three River Festival parade (part of an annual festival spanning nine days in mid-July that celebrates the heritage of Fort Wayne), where they chanted the Maha Mangala and Karaniya Metta suttas and shared Jataka tales; celebrated Vesak (which commemorates the birth, enlightenment, and passing of Shakyamuni Buddha) and the Sri Lankan and Western new years, the latter with a precept-taking ceremony; held a meditation retreat to fundraise for the Nepal earthquake victims and joined an interfaith peace vigil to commemorate the shooting of Muslim students in Chapel Hill, North Carolina; represented Sri Lanka and Theravada Buddhism at the Indiana Festival of Faith; served holiday meals at rescue missions; and participated in Thanksgiving ceremonies at a local synagogue. Also in 2015, Bhante Devananda began a Dhamma Service at the Correctional Industrial Facility, which is a medium-security state prison in Pendleton, and was a regular guest speaker at yoga centers and universities. Local university classes sometimes come to the temple as well.

Bhante Devananda’s activities also extend to his homeland Sri Lanka—he is director of the Sadaham Foundation, a non-profit organization for the underprivileged. While the foundation’s original mission was compassionate outreach to economically and socially disadvantaged families, this has now expanded to the release of animals from slaughterhouses. Their work includes collecting reading glasses for underprivileged seniors and school supplies and uniforms for underprivileged students, building houses for needy families, donating supplies for families impacted by landslides, paying for medical treatment and funeral services on behalf of poor villagers, donating sewing machines, and providing medical treatment for elephants. Supplying flashlights and clothing, making donations to school funds, and building a pagoda for a rural temple in Badulla are also among the activities of this remarkable non-profit. And for Bruce Allen, what began as a gesture to share his water lilies has now blossomed into a full orchard and garden:

“A few years ago, Bhante Devananda did me the honor of allowing me to plan a garden and orchard area. Since this is my real passion I went at it with gusto, and we now have several small, but growing, fruit trees, grape vines, berry bushes, flower beds, and vegetable gardens. Yes, it’s a lot of work, but truly a labor of love knowing that it is not really mine, but to be shared by all. I hope the fruits of my labor will continue to pay back the temple long after I am gone.” 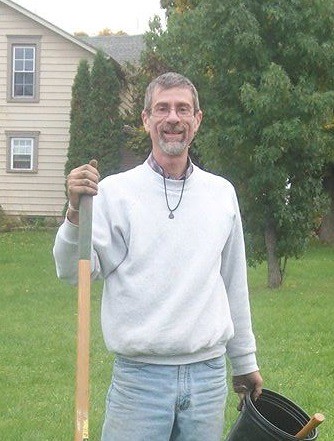 “For me, regular temple attendance has been an indispensable anchor, orienting both my activities and inner life around the Dhamma. The Sri Lankan monks and laypeople have enriched my life and broadened my outlook in many ways. I also grow through my interactions with other regular members and the many people who pass through.”

“I love our monks as my brothers, and am most grateful and honored to have them in my life,” shared Bruce Allen. “I have always felt unquestioningly accepted at the temple, and mark the day of my first visit as a real turning point in my life. Absolutely no attempt is ever made to convert anyone to Buddhism, which would not have been necessary for me in any event, having long been favorably disposed to this insightful and peaceful way of life. I plan to continue being a temple goer for many years to come, and am most proud to call it my spiritual home.”

In the middle of America’s heartland, what began as a simple water lily start being planted in a fertile pond has blossomed into a vehicle that is transmitting the compassion of the Buddha, Dhamma, and Sangha. When asked what the temple’s future plans might be, Bhante Devananda aptly responded, “To share loving-kindness and Dhamma with all”! May this effort continue to be realized with the blessings of the Triple Gem.