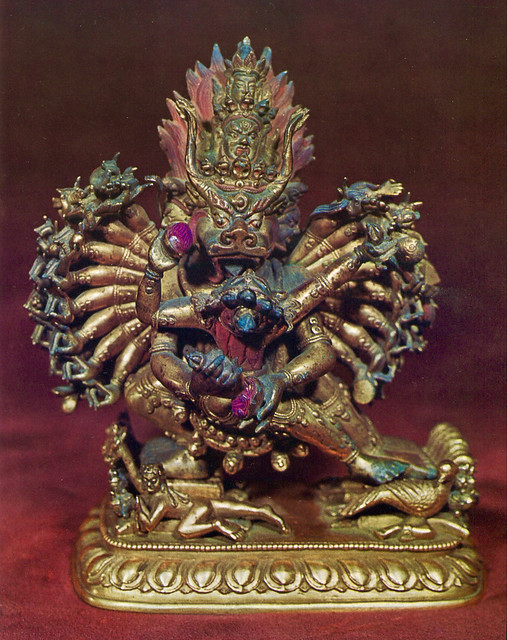 Vajrabhairava, conqueror of death, in yab-yum position with his dakini. Gilt bronze,
17th century, Kathmandu. The Buffalo-faced, multi-headed deity has 34 arms and
16 legs, and marches over birds and other animals. The deity holds his dakini, a
dorje (Tib: vajra) and skull bowl. From Tucci, Rati-lila, The Art and Love of Nepal,
Les Editions Nagel, Paris. 1975. p. 123. Photo by Lorenz Prinz

Familiarity with sexual power as something to honor and utilize for spiritual cultivation is not common, but upon a study of ancient cultures, we see it is nearly universal; and from a review of contemporary yogic practices, we can see it still exists today.

Just as meditation practice is personal and private, sexual yoga is more so. Any full self-examination must address sexual and generative energy. The Sahaja tradition of sexual yoga was established by tantric mahasiddhas in Bengal in the 8th and 9th centuries, who sought transcendence beyond good and evil, male and female, sacred and profane. Sahaja means natural, co-emergent. The deity Hevajra, dancing in yab-yum, is favored among tantras of the Sahaja tradition and also among the dominant traditions that practice no sexual yoga.

Sahaja is free of them all. For there is neither desire
nor absence of desire, nor a middle to be obtained.
(Hevajra Tantra)

The practice of ritual sex and its purposeful depiction far outdates the notion and religious usage that is it all merely artistic spiritual metaphor. Routinely, from Japan to Afghanistan, Dunhuang to Kathmandu, when a dance is depicted in Buddhist art—whether for decoration, mystical instruction, or philosophical symbolism—it existed as an actual dance in real life first. The same is usually true for depicted clothing and instruments. Even naked deities dancing perform known dances and postures. It is the stuff of a separate column to discuss these antecedents in dance, suffice it for now to report that the roots sink deep into pre-history. 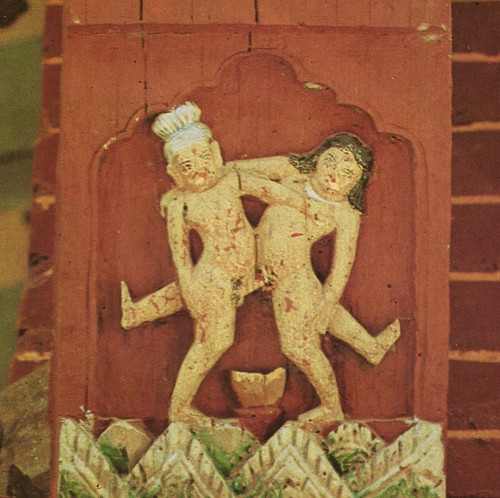 The remarkable mural images from the ruins of Tsaparang, where Tucci surveyed the artistic representations, have become for many the highest known expression of one style of Tibetan art. It is critical to remember that this art was often created by and always intended for tantric initiates. According to tradition and practice, anyone not initiated into these meditation cycles has no psychic access to the content, regardless of however long one might study the images. These dancing deities are designed to be understood fully by none other than initiates. Tsaparang was an important temple, so the nature of the scenes depicted, which are in fact tantra cycles of connected meditation deities and practices, is of a heightened stature. There is no question as to the exalted meaning of the dancing coupled deities. 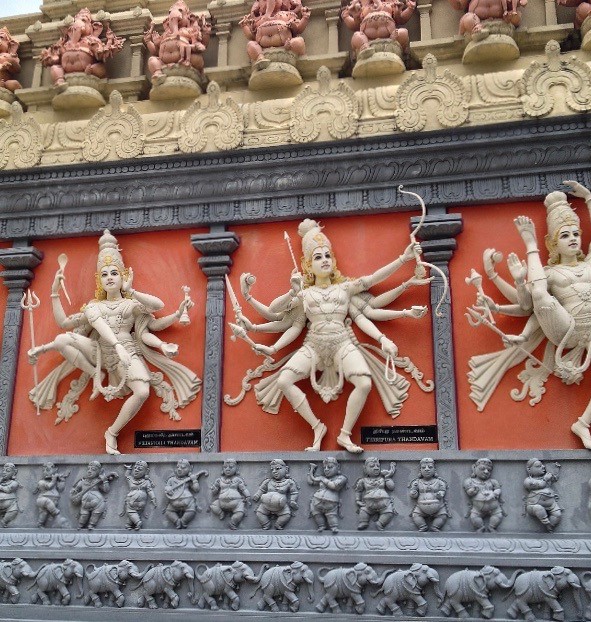 The Tsaparang images in sculpture and painting are detailed depictions of dancing. They are not posing. They show positions having one foot supporting the body and the other, usually extended, with the sole exposed, meaning no weight is on the foot. They are dancing, which is to say, moving from one form to another. The weight favors one leg over another, freeing the other leg to execute some step. The dakini facing upward, directly to the sky, with her front arm extended, is a dance position. The lunging deity glares straight outward, supporting the dakini on his hips with one arm. 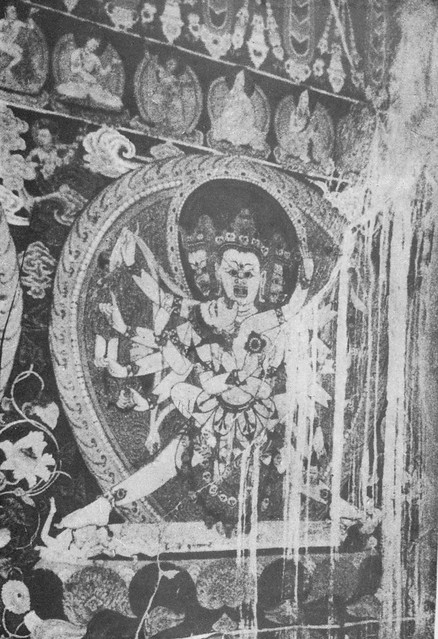 Kaya-daka in a coupled ritual dance with his dakini. Tsaparang. From
Tucci, Indo-Tibetica III-2, plate 66. 1935

One reason that still art, like sculpture and painting, uses dancing positions, is to reveal the deity in their full power; frozen in time, the deity performing a precarious athletic movement signifying spiritual accomplishments. This is depicted dance, reflecting visionary dance in meditation. Actual dance becomes key to analyzing living resonances. Dancing animal-headed attendants of Dakini Vajrvarahi. The dance movement is arrested in time, revealing the energy and nature of the deities. Demchog Temple, Tsaparang, 2008. From Core of Culture

Going far back into the Indian archeological record, sequential deities with multiple arms and legs have been found to be both a symbol of many attributes and, at the same time, the sculptural equivalent of a time-lapsed photo series: showing more than one dance position, indeed showing a rhythmic sequence of movements. The tantric deity Hevajra is characterized by dancing. At such times as when the meditating monk lifts an outer cover of the hanging painting of Hevajra, under which, above the flickering light of a candle, the figure appears literally to be dancing. Tucci suggests that simply moving the eyes over a scene, with the proper mystical evocation, generates animated dance. Both of these techniques appear among the earliest known art of man, the cave paintings of prehistoric Europe. 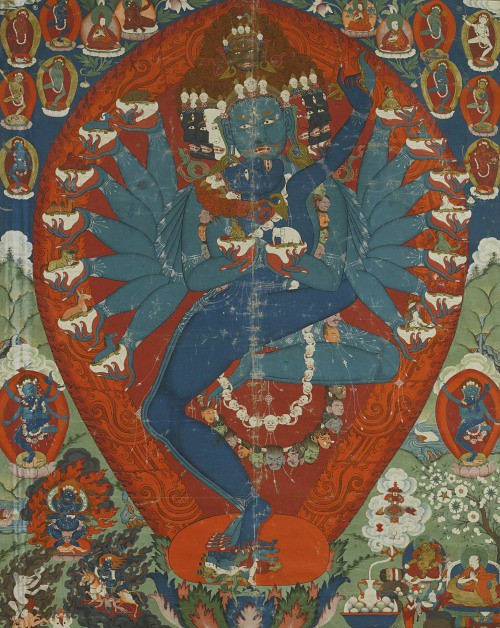 Hevajra and his consort dancing in yab-yum, surrounded by eight dancing
goddesses. Painting, Tibet, 19th century. The many arms symbolize the deity’s
attributes as well as pure energy and the moving shapes of a dance. Above a
flickering candle, the pictorial image appears to dance. Evoked by meditation
techniques, the visualized image begins and continues dancing. Image courtesy
of Sotheby’s 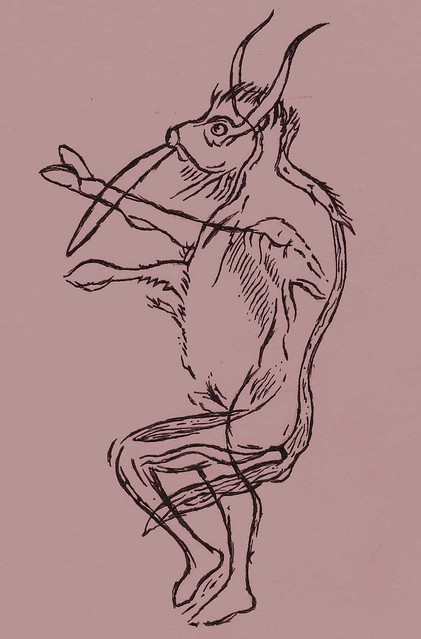 The Shaman, one of the oldest known images of a dancer, in Les
Trois Freres cave, France. This image is isolated here from a huge
and complex cave surface painting. Initiates under the influence of
hallucinogens were brought into fire-lit caverns. The entire surface of
the cave wall danced, as the initiates did too. From Four Hundred
Centuries of Cave Art by Abbe Breuil, 1952, p.164-165, Centre
D’etudes et de Documentation Prehistoriques, Montignac

If they are dancing, obviously they are doing more than just having sex. What kind of dance is this? Dance is used in many artistic traditions as a symbol of skill and divinity. Deities don’t walk; they dance. The great skill required in the sexual yoga of tantric, as well as Taoist, practices is that of the male partner retaining his seed and “re-circulating it,” rather than ejaculating. His dakini continually raises the level of energy fundamentality, and the deity raises the whole consciousness to another plane by his tantric sexual skills and mastery of energy transformation and integration.

Guru Rinpoche often appears in art accompanied by his two tantric consorts, Yeshe Tsogyal and Mandarava. Interestingly in regard to Buddhist dance, these three: Guru Rinpoche, Yeshe Tsogyal, and Mandarava, are responsible for transmitting and teaching dances to famous yogis in yogic visions. Many of these dances are still performed. The visionary Buddhist dance tradition is an emanation of the tantric unions of Guru Rinpoche.

Guru Rinpoche famously used dance to subjugate the local deities, and dance keeps them entranced into service to Buddhism as dharmapala. Dance is a tantric form of subjugation, entrancement, and re-consecration of ancient powers. The founding of Samye Monastery, the first Tantric Buddhist monastery in Tibet, was completed thanks to Guru Rinpoche subjugating the ancient local deities by means of a dance. The depicted dance of these coupled deities, with origins in the roots of tantra and indigenous Tibetan practices, is another example of the subjugation and transmutation of elemental powers by Tantric Buddhism. Sex is sex, but dancing sex has to follow the steps. It is a consecration. 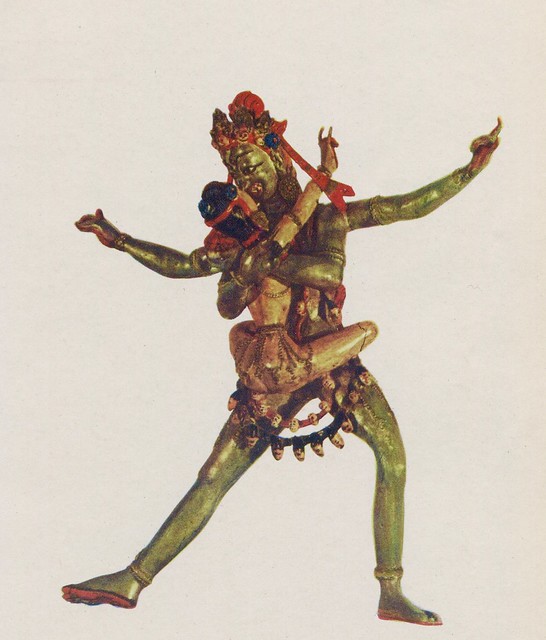 Actually, the phallus and yoni are not shown in these images. Sometimes the deities’ testicles are seen, but not in the Tsaparang images. There is also a set of terrifying ithyphallic (fully erect) wrathful deities, considered an even more extreme figure for potential transformative energy than the coupled deities; and there are numerous explicit depictions of the yoni in the many dakinis and yoginis. The coupled deities are, in fact, less explicit than other Tantric imagery, yet there is a raw power in them, and the sex act must become an act of the observer’s mind. In this symbol, the sex act is depicted but not shown. In this, the observer—the meditator—controls the evoked and awakened powers.

Orgiastic? The dance of coupled deities is orgiastic inasmuch as raw sexual power is unleashed. The other full complement of the depicted mystical reality is that sexual power can be controlled, become symbolic, ritualized, and used as a path on the Way. Dance provides order and entrancement. The dances are orgiastic as well in depicting the sexual component of an ancient mystery rite. Tucci was wise to point out what our culture has left behind— the spiritual language of the living body.