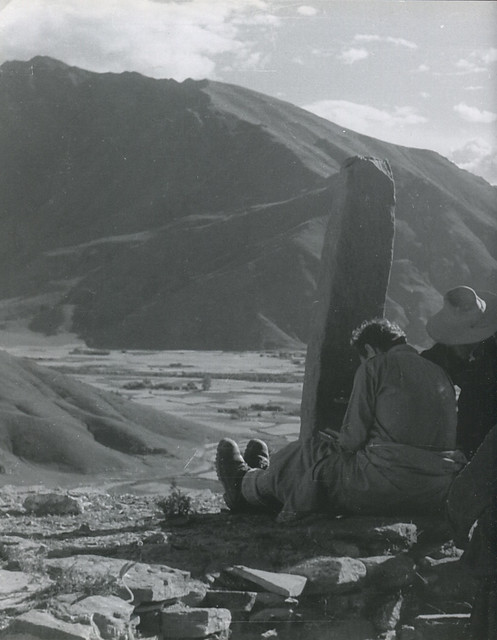 Giuseppe Tucci, whose astonishing intellectual vigor embraced Tibetan culture
with wonder and intuition, seated at the base of an ancient stone pillar in Tibet,
transcribing the carved inscription. 1948. Photographer unknown

This column has explored the ideas and activities of Italian scholar and adventurer Giuseppe Tucci for several months, particularly his observations on mural images of wrathful meditation deities in erotic embrace; a fascinating subject. Yet it is a small part of the original observations of Professor Tucci, whose encounter with Tibetan art and culture can be compared with those who first crossed oceans, climbed mountains, or went to the moon. There is a purity and originality in the initial impression; a breadth of spirit and an openness toward an unknown civilization. It is clear how Tucci noticed dancing and how he used dance as a means to understand art and religion.

Others preceded Tucci. Indeed Italian missionaries went to Tibet in the 17th century. Italy claims the grand model of an adventurer in Marco Polo. Yet Tucci is the original Western mind approaching Tibetan culture with humility and honor, and a sincere desire to learn it and know it. Please enjoy here, two passages from Tucci that, even in translation, are examples of beautiful writing, keen observation, and critical thought. Can you imagine being the first Westerner to see the esoteric murals he describes below?

You will discover on the walls, the altars, and even hanging on the ceiling, an undreamt-of jumble of images of gods and devils which may let you think you are in the realm of gross idolatry. Tens, hundreds, thousands of deities teem and surge before your eyes, as if they had been born of those copulating images so dear to esoteric iconography, as endless as the stars on a midsummer night. They are hard to count and will at first look all alike, but a trained eye will detect subtle differences in the attitude of the hands, in the garb and the colours; and the new comer will feel thoroughly puzzled and nearly overwhelmed by that avalanche of gods jostling him on all sides, as if every aspect of creation had perforce to be either a god or a demon. If he does not lose heart, if he talks to the monks and reads the sacred books, those images will melt before his very eyes, those gods will dissolve and that religion, which struck him as the height of a devilish polytheism will abruptly shed all its idols; the whirlwind of sacred figures will vanish like night’s darkness at daybreak, and the motley crowd of dancing monsters will fade into dull emptiness.

There are no gods any more. That reveling, macabre Olympus will leave its place to a religion without gods, nay, without God, to a serene contemplation of void, the revelation of impassive, mercilessly dazzling light in whose immovable blaze everything evaporates without trace. Man finds himself alone, though he is everything: as he is himself that light, not any more an impermanent being with its limitations, its daily sufferings and hopes, but an unshakable reality in its quintessential purity. When a religion dissolves even the gods, man proves to be even less than a dream-like shadow, like the moon’s orb reflected on the ruffled mirror of a lake. Tibetans live and die in the certainty that truth is not in things they see, in the things that frighten, trouble, charm or delude them, but just in that nothingness blowing its frosty breath on all worldly phenomena. Asked what is at the bottom of the universal mystery, any Tibetan will answer,“tompanyi,” the void, nothing. That answer will be on everybody’s lips, the priest’s and the packman’s, the prince’s and the peasant’s. 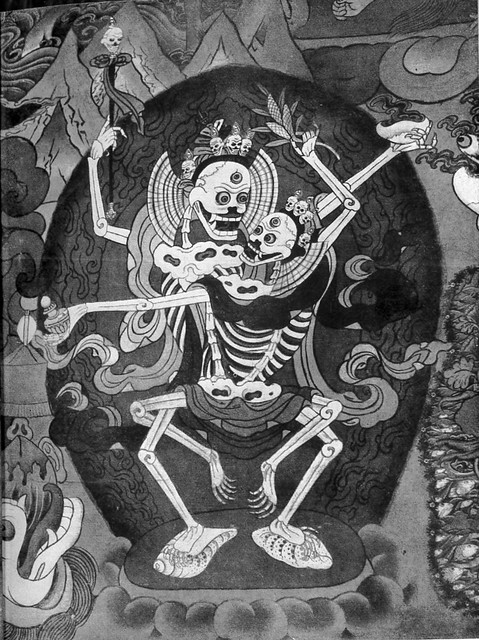 Chitrapati, dancing skeletons in yab-yum. Mural painting, Tibet. Photo by
Fosco Maraini, 1952. Maraini was a scholar companion to Tucci on a Tibetan
expedition

Everything there breathes mystery and fear, and the terrific images prevail to such and extent as to weigh like a nightmare on anybody entering into the chapels. A thrilling, but uncanny tenseness grips him as the flickering lamps suddenly elicit from the darkness improbable figures bristling animal-like with arms, with several heads, devilishly sneering, dancing in lustful copulations, shaking with destructive rage. A deadly shiver seems to be running through those images, though on closer scrutiny they do not really prove frightening. Some Egyptian statues, in whose mysterious stiffness there is the glint of a ruthless cruelty, can really haunt your dreams, as those steely features conceal an unflinching will baulking at nothing and ready to bend anything. Their expressionless silence and their numbness will chill you.

In the Tibetan images there is the rhythm of dance, a sense of movement, of death paving the way to renewed life: their destruction will create again. There is an echo of dancing Shiva, of that cosmic power alternatively dealing out death and life and offsetting both in its embrace. If those images therefore had baffled you first, your impression may improve on acquaintance, as you will feel they have a meaning, and a bearing on the fabric of the universe. You will be able to understand them and, in doing so, to see through them.

They will dawn upon you for what they are, the outline of an elemental world where things have not taken up yet any final shape but are still struggling for it, with sudden repentances and recoils, where the human and the beastly, good and evil are co-existing in bud. You will then feel nearer this people, who still live so close to the hub of things and dispose of a clairvoyance shedding light on the riddles of the subconscious and discovering there armies of angels that soar, legions of demons that lurk, a foamy turmoil of powers only Buddha’s word can set at rest, by dissolving those images into Nirvana’s peace. But until this comes to pass, man always finds them standing in front of himself, because he himself is bringing them to life; those images are the projection of his innermost individuality, the active fragments of his interior life, the shadow of his thoughts that follow him until he dies out in the mystery of that nirvana. 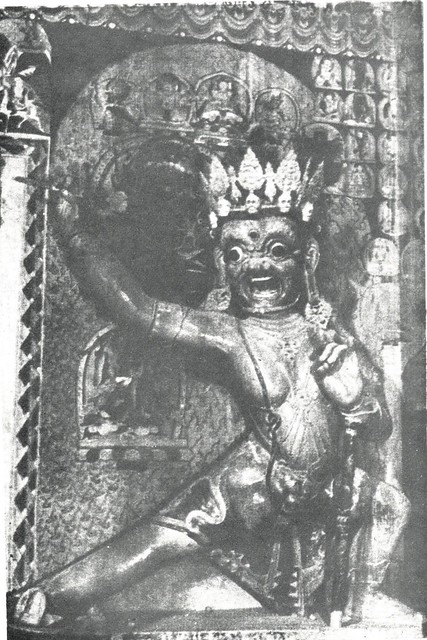 Red Hayagriva, a wrathful protective deity. Tsaparang. The
exceptional vitality of the figure characterizes the high quality of the
art. The depictions of dance, martial movement, sex, yoga, and
mystical techniques at Tsaparang come to life in convincing lyrical
movements of the body. From Tucci, Indo-Tibetica III.2, plate 68. 1935

Tucci, Giuseppe. 1956. To Lhasa and Beyond: Diary of the Expedition to Tibet in the Year 1948. Rome: Istituto Poligrafico Dello Stato.