There are not so many places left on Earth where the population is virtually 100 per cent Tantric Buddhist. Spiti Valley in Himachal Pradesh, India, adjacent to Tibet, is one of them. Core of Culture, the organization I direct, has completed its summer 2016 Cham dance research fieldwork there and is able to bring forward a wealth of information about Buddhist dance, meditation, and history that has never before been made public.

The pervasive Buddhist character of Spiti Valley is part of the protection surrounding the serious practice of Tantric Yoga in the monasteries there. Not commercialism, nor Hinduism, nor Islam, nor communism have negatively impacted the practice of Buddhist monasticism yet. Conversely, monastic Tantric Yoga is part of the protection surrounding the Buddhist population. I have written accounts of our visits and the Tantric practices related to Buddhist dance in the first four parts of this series. This is the fifth and final installment of “Finding Excellence.”

Bhutan, where Core of Culture worked during the final five years of absolute monarchy, is another Buddhist land. Bhutan was a Buddhist kingdom and is now a Buddhist democracy. The pure spiritual flavor of a place, the immersive values rooted in peace, the cultural coherence and ritual integrity are all qualities of Buddhist lands that simply cannot be found in pluralist societies, occupied territories, colonial outposts, and disputed borderlands. There is something profound to be learned from these few remaining Buddhist lands. Indeed, we learned much about the nature of dance itself.

The nature and impact of change is most clearly seen against a baseline of unadulterated cultural practices. While Bhutan remains a mostly Buddhist nation, the culture had more integrity under the direct rule of kings than it does as a fledgling democracy, with its attendant capitalism that has infected the population. Bhutan is open for business. A fundamental change occurs when Buddhist monasteries, monks, and festivals become commercial commodities.

Not unlike western art scholarship and museum culture assigning commercial value to ancient religious art, the industry of tourism overlays a value system on Buddhist architecture and rituals based on their power to lure tourists and bring money to hotels, taxis, restaurants, and merchants. Basically, the tourism industry, often with the full support of the government, treats Buddhist sites and rituals as natural resources like mountains and rivers. Everyone makes money from it except the monasteries, mountains, and rivers.

The tourism industry is the single greatest destructive influence on Buddhist lands. Surely its impending ingress into Spiti Valley bodes darkly for the preservation of Buddhist values and cultural expression. Tourism is literally making inroads, as excellent new roads have been constructed through certain sections of Himachal Pradesh. Thankfully there are still plenty of perfectly awful, dangerous, harrowing roads to dissuade the leisure traveler. 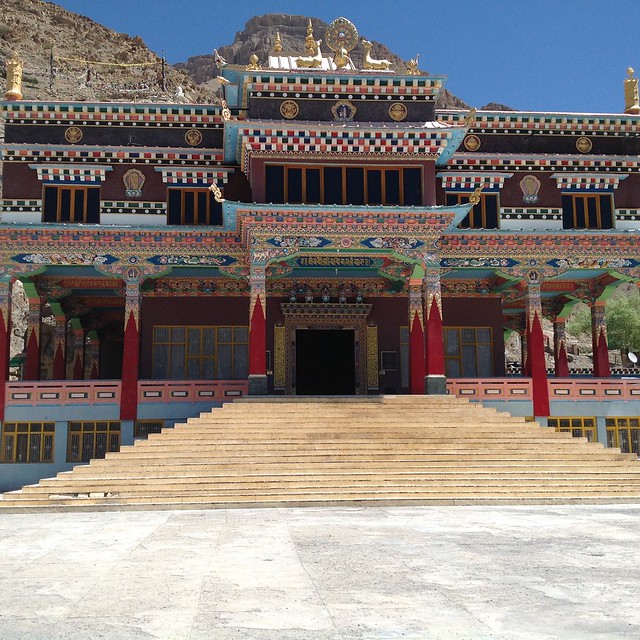 This is, therefore, a very important time to be conducting research in Spiti Valley as it is on the cusp of change. The abbots and rinpoches in the Spiti monasteries were emphatic: Cham dance ceremonies are not for tourists, were never intended to be, and tourists are not invited. Is it surprising, then, that we encountered some of the most rigorous integrations of dance and meditation in Spiti among the many monasteries of the Trans-Himalaya we have visited over the past 20 years? Is not this integrity and spiritual accomplishment worth protecting and carrying forward?

Indian middle-class tourism, catered to by a sprawling ancillary industry, has turned the charming city of Manali into a lawless nightmare. Rather than escaping India’s urban centers further south, tourists bring the worst of urban behavior to once lovely places. Simla is another famous city struggling to bear the weight of an excess of tawdry tourism. Cham ceremonies in Ladakh are overwhelmed with tourists, and battling them has become part of the experience for the monks and foreigners alike.

During our monastery visits in Spiti Valley, the very mention of the word “tourist” would cause the monks to mime the act of taking photographs. To the monastic leaders here, tourists and the prioritization of, or surrendering to, photography are one and the same. Death by paparazzi. 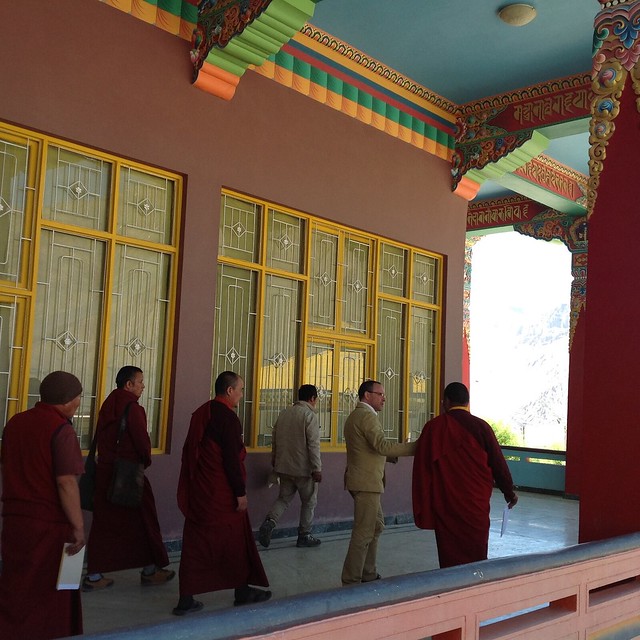 Core of Culture director Joseph Houseal speaks to the lama tipa of the Sakya Monastery in Kaza as
they head to a meeting. Photo by Konchok Rinchen for Core of Culture, 2016

The Sakya sect monastery Sakya Tengon Lundup Choekor Ling towers over the town of Kaza, which serves as the seat of the regional government. Nawang Tashi, the lama tipa, or functional leader of activities at the monastery, shrugged when I asked him about tourists or problems with tourists during their festivals: “What can you expect from foreigners except ‘click, click, click’? They are not many, but they are ignorant and they always leave—they never stay for the full ritual. They are more like mosquitos or flies than a big problem, but they are an irritation. They are not really interested in what we are doing, but rather what they are getting.” “Kaza is the seat of government for Spiti and so the monastery serves a more public function than other remote monasteries here that have the opportunity to restrict who attends,” Nawang Tashi observed. “Government and military officials always attend, tourists passing through, and school children from around the district come. The monastery works with all the institutions in Kaza.”

“There is a two-year meditation retreat requirement before becoming the champon (dance master) at Kaza monastery, and the philosophical aspects of Cham are emphasized. Kaza monastery is primarily a place where Buddhist monks can continue their education in philosophy, debate, and liturgy, and at any given time, as many as 120 of our 200 monks are away at higher centers of learning. Forty monks know Cham well, and 40 boys are in training.”

Kaza monastery was the only monastery in Spiti we visited that named “quality and skill in dancing” as one of the factors in choosing dancers. The lama tipa, with the help of senior monks, look for monks who can dance well and uphold the prestige of the monastery and town of Kaza.

The Buddhist culture of Spiti Valley is fundamentally one of respect. The monasteries and villages survive on a mutual and symbiotic relationship based on the noble and spiritual values of Buddhism. Between the five major monasteries that rotate hosting celebrations in Spiti to mark the birth of the Buddha, more than 40 associated villages are involved in expressing themselves with dances and song alongside the monks who perform the dances of their tantric practice. This is a remarkable danced expression of the mandala of monasteries and villages that etch the mountainous landscape; that define this Buddhist land.

As I ponder what work is meritorious for Core of Culture to undertake going forward, I can think of nothing more rare and meaningful than documenting the Tantric dances, the “Mandala of Vajrayana Buddhism” as it is lived in Spiti Valley; to ensure that the ongoing and authentic practice of Cham dance is performed as a monastic discipline, and not as a tourist commodity. Spiti will surely change, as all things do, but for now I can only be grateful to have encountered another true Buddhist land and to learn everything we can from this amazing remnant of how the world once was, when Buddhism pervaded every aspect of life and landscape. Core of Culture director Joseph Houseal completes ethnographic records of CoC’s work in Himachal Pradesh in 2016. Village of Kalpa, district of Kinnaur. Photo by Konchok Rinchen for Core of Culture, 2016

I would like to take this opportunity to express my humble and complete gratitude to my incredible 2016 Core of Culture team in the field: Dechen Lundup of Tabo, our indispensible local guide; and two monks from Lamayuru: Konchok Rinchen our photographer, and Konchok Tsultrim, my assistant.