Monks at Sanga Choeling Monastery in India's Pin Valley break into dance spontaneously when they hear we have come to conduct research into their Cham practice. Photo by Konchok Rinchen. From Core of Culture

Venture into remote places and you will find a joyful purity. During our recent summer fieldwork in Himachal Pradesh, northern India, we distributed copies of a Buddhist dance treatise, The Snow Lion’s Attributes, among the monasteries there, and used it as a touchstone for illuminating conversations about Cham practice. In Spiti Valley and the adjacent Pin Valley, Buddhist researchers have for decades examined Vajrayana Buddhism in what has long been an almost inaccessible area in which some of the oldest Buddhist monasteries practice tantric disciplines in an uninterrupted mental climate, unmolested by modern tourism and beyond the reach of urban turmoil. Blocked by snow for many months of the year, isolation has preserved authenticity. Spiti is on the cusp of change, however, and this is a critical time to carry out research. 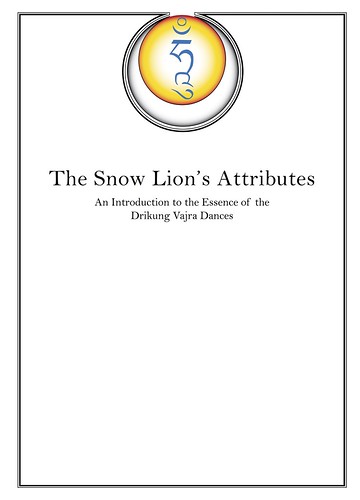 The Snow Lion’s Attributes, A Buddhist dance treatise
of the Drikung Kagyu school that Core of Culture has
published and is distributing among monasteries.

Core of Culture, the non-profit organization that I direct, is the first to examine the Cham dance traditions at these monasteries that define a “Buddhist land” wherein virtually 100 per cent of the population is Buddhist. Sanga Choeling Monastery, belonging to the oldest and original school of Vajrayana Buddhism, the Nyingma, sits atop a mountain range overlooking the vastness of Pin Valley in Spiti, Himachal Pradesh. This enormous valley is flanked by snow-capped peaks on both tapering ends, with waves of mighty rock undulating in the sky surrounding this Nyingma sanctuary founded by Padmasambhava in the 8th century. Some temples and the art contained within them date from 1330 CE. The newest building—a prayer hall and dance courtyard—is quite recent, courtesy of a foreign donor. Most of Pin Valley is a national wildlife refuge; a home to many rare things. Sanga Choeling Monastery (or Kungri Gonpa), founded by Guru Rinpoche in the 8th century, is the only Nyimgma monastery in Spiti. Photo Konchok Rinchen. From Core of Culture

It is our custom when we work, to meet with the resident rinpoche, abbot, or high lama—for their blessing and permission, if nothing else. There being no telephone service across these peaks, we considered ourselves fortunate to have met with high lamas at every monastery we’d visited so far this season. However, the day we reached Sanga Choeling monastery, the oldest in Kungri, we learned that the abbot, Yomed Rinpoche, was away.

Young monks were working throughout the monastery and courteously offered to fetch the oldest monk they knew, who lived in the village. Our team was already returning to our vehicles when I told them to stop. “We don’t need to bother the old monk,” I told the teenage monk standing near me. “But tell me, who is the best dancer here?” The young monk, Tshering, 18, invited me to his room for tea and within minutes another monk, 23-year-old Palden Tundup, appeared. He spoke some English and was surprised that anyone, much less a foreigner, would ask for “the best dancer.” He was a little embarrassed that the designation “best dancer” was pretty much unanimously agreed upon by his fellow monks. Palden Tundup explained that the rituals used at their monastery were from the Tantras of the Bhutanese Saint Pema Lingpa, with the exception of his 15th century dances. Also carried out were rituals of the Nyingma Terser tradition. Cham is performed twice each year, in a major Tsechu in October, as well as on the birthday of the abbot when several dances are performed.

Sanga Choeling has 75 monks and 38 boys. There is no champon or dance master. Instead, six jorpon, a type of monastery official, take responsibility for training and selecting the dancers. I asked how the dancers are selected and how he came to be the “best dancer.” He laughed and replied, “We all have to learn Cham movements when we are 12. So the dancing is easy, we know it from childhood. We enjoy doing it, it is almost second nature.” We’d seen as much when the monks started dancing upon our arrival.

I asked about a Chams Yig, or dance manual, and Palden Tundup casually answered, “Every monk has a copy. Knowing it is part of being a monk here.” In nearly two decades of carrying out Cham research in the Himalaya, where most monasteries do not even have a Chams Yig, or cannot find it, or don’t use it if they do have one, we had never before encountered a monastery in which every monk had his own copy and knew its contents. 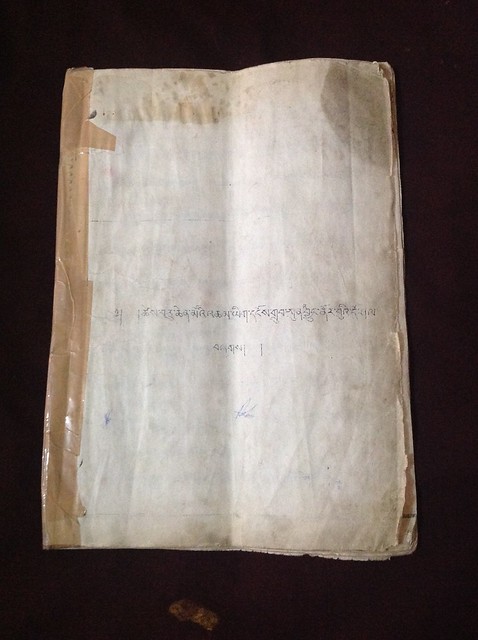 “Yes!” he laughed, and told the young monk making tea to show us his copy. The poor lad couldn’t find it, so Palden Tundup instructed the monk precisely where in his own room his copy could be found, and within minutes it was produced for us. Since we consider a Chams Yig to be a kind of Holy Grail for ancient Buddhist dance and have produced an expensive and beautifully designed dance treatise to share. We were a little surprised, therefore, to be handed a stapled, mimeographed copy of the Tibetan manuscript, quite the worse for wear. I was dumbstruck.

Palden Tundup was amused that we thought his monastic exercise of Cham was so extraordinary. It is a scholarly, tantric, and choreographic discipline performed by every monk with whom he lives. He further explained that the battered document I was holding was written in two types of Tibetan script, and that it instructed in all aspects of Cham at once: dance, meditation visualizations, and mantra (empowered chant), which are performed with the dance.

“Since Cham dances are ingrained in our bodies from childhood, we don’t worry about the dancing part. It is the meditation visualizations that are difficult, but we see improvement every year,” Palden Tundup related. “The Chams Yig is really a guide to Deity Action yoga. We like reading it, because it is more than reading.”

The original manuscript was produced in some unspecified ancient time by a monk named Dorje Dundop, who spoke out the Cham teachings to a scribe, who recorded them in the document we held before us. The Cham teachings themselves were attributed to Dortol Lingpa—a title that intrigued us greatly. “Lingpa” is a title used for a terton, or “treasure revealer” who is privileged to receive the hidden teachings of Guru Rinpoche, which were intended to be discovered at a future time. Pema Lingpa, whose rituals were used by Sanga Choeling, was a terton, and the many extant dances of his remaining in Bhutan are ter cham, or dances specifically left for the future by Guru Rinpoche.

We are searching for answers. Sounding similar to “Dortol,” the terton Dorje Lingpa also revealed a canon of Cham dances in the 14th century, and these dances have been kept alive at three monasteries in Bhutan. Pema Lingpa and Dorje Lingpa are two of the five Treasure Kings who left major bodies of tantric practices for posterity. Clearly, we have work ahead of us, unwinding this mystery of ancient dance. 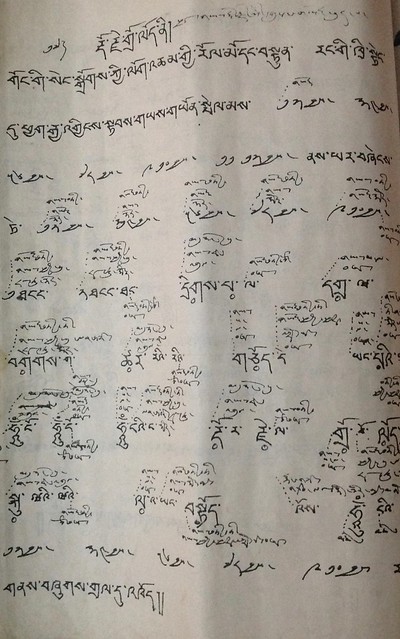 A page from the Chams Yig at Sanga Choeling Monastery in
Kungri, Pin Valley, attributed to Dortol Lingpa. It shows multiple
forms of instruction. Photo by Konchok Rinche. From Core of
Culture

I have so far been unable to find any information on Dortol Lingpa, but it remains a primary point of inquiry for us, particularly considering the age of the monastery and the fact that it is of the Nyingma school, the oldest school of Vajrayana Buddhism, and one that has shown us on numerous occasions to have the most interesting dances. The Chams Yig at Sanga Choeling details 14 unique dances. It still astounds me that every monk here can dance from the age of 12, and further, is easily familiar with the contents of the ancient Cham Yig that they keep in their rooms. The new chamra, or dance courtyard, at Sanga Choeling Monastery, with circular spacings marked out. Monks stand at the monastery gate looking out to the Pin River. From Core of Culture

I asked Palden Tundup for his thoughts on the future of Cham, and his answer came swiftly: “All of Kungri is proud to uphold the ancient Nyingma teachings. It is still the case that every family’s second son becomes a monk. We are very proud of this tradition, and it will not fade away any time soon.” The other monks in the room nodded in approval. I was impressed with his sincerity and the nobility with which he spoke of his own traditions.

“We’re all really good dancers, too,” Palden Tundup teased me, his joy infectious. “You should come and see our Cham ceremony. We don’t do it like a tourist show, but I can tell you would like it.”

He’s right about that.