The Snow Lion’s Attributes, a Buddhist dance treatise at the core of dance research fieldwork in Himachal Pradesh. Design by Nicholas Alguire, Core of Culture.

Researching endangered dance traditions as I do, it is usual to chronicle the problems, challenges of discovery, along with the qualities of vanishing practices. So it was with delight and surprise, during fieldwork in the eastern tribal areas of Himachal Pradesh this summer, that we encountered a number of monasteries where Cham dance practice remains strong, vibrant, and firmly rooted in tantric visualization realization practice—examples of excellence that serve everyone, today and tomorrow.

The work, underwritten by the Asian Cultural Council in New York and the John Porter Charitable Trust in the UK, was an expedition in the classical sense: the results were to be discovered, not predicted. After nearly two decades of working with endangered dances in the Himalayas, our discoveries this summer served to positively highlight tantric Buddhism rigorously practiced, supported by revealing comments from high lamas and dancer monks.

Our four-man team proved effective and hard to miss, comprised as it was of an American director in suit and tie (me); Dechen Lundup, an indispensible local guide who had spent 22 years as a monk, and two monks from the famous Lamayuru Monastery in faraway Ladakh: Konchok Rinchen taking photographs and Konchol Tsultrim assisting me. Equipped with a letter of introduction from His Holiness Drikung Kagyu Chetsang Rinpoche, head of the Drikung Kagyu order, and copies of the beautifully designed and printed bilingual dance treatise The Snow Lion’s Attributes, we were welcomed at each of seven monasteries we visited, where the monks were intrigued by this unusual diplomatic overture.

Dance documents are used variously among Buddhist orders, and the usual text used is a Chams Yig, or dance manual, which lays out the steps for each dance, either in detail or by relying heavily on a living interpreter. A dance treatise, explaining the philosophy, theory, and meaning of Cham is a rare manuscript. In 17 years of work, we have only ever encountered this one, and so thought to re-print it and share it—to perhaps flush out more dance writings, and certainly as a means to spark serious discussion of contemporary Cham practice.

The little book, a Buddhist dance treatise based on 12th century manuscripts, did its job, becoming the touchstone in a series of electrifying conversations about the state of Cham practice, allowing for a comprehensive and unprecedented survey concerning rarity and continuity. The English text is an adaptation of a Tibetan original by His Holiness Chetsang Rinpoche. Based on ancient texts, it was prepared especially for guests at the Inauguration Ceremony of the Drikung Kagyu Institute, including His Holiness the Dalai Lama, at Jangchubling Monastery, in Dehradun, Uttarakhand, northern India, in November 1992. This inaugural event recreated in exile another from 1669, when the entire repertory of Driking Vajra Dances was performed before the Dalai Lama.

The Snow Lion’s Attributes inspired and motivated those who received the book. This series of articles, Finding Excellence, shares some of the highlights of the resulting conversations, which are presented as they occurred; as the karma unfolded. Cham dance practice is incredibly diverse in its various forms, spread across the Trans-Himalaya, Tibet, and parts of India, and no school of Vajrayana Buddhism performs the same dances in every monastery. Diversity between each school is also great, reflecting variations in tantric practice, lineage, location, lore, and legend. There is a certain ease in areas where the oral tradition is strong, with the kind of confidence that arises from traditions being so customary that they are not over-analyzed, but simply and wholesomely carried out. 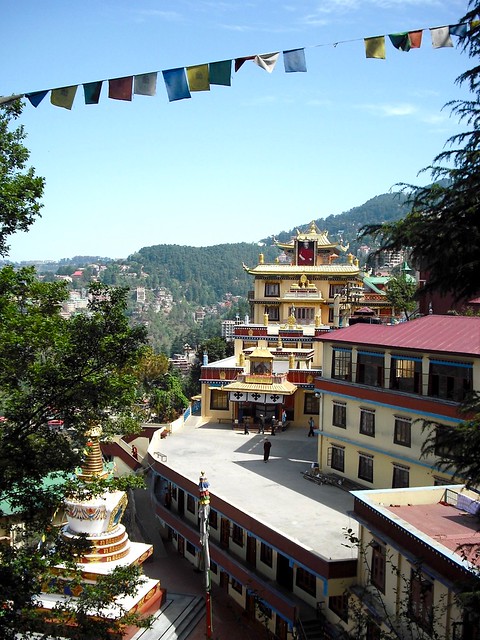 Dorje Dorak Gonpa, a Nyingma monastery in Shimla, India. The Chamra,
central dance courtyard, and audience grounds, can be seen. Photo by
Konchok Rinchen. From Core of Culture

The ingresses of mass tourism, such as have increasingly plagued intangible as well as tangible cultural heritage in other parts of the Himalayas, have yet to challenge the purity of Cham practice in Himachal Pradesh. However, there are plans afoot to change this isolation, with the construction of new roads and an aggressive tourism industry ready to exploit the cultural assets that Buddhism provides amid the region’s brutal and beautiful landscapes. 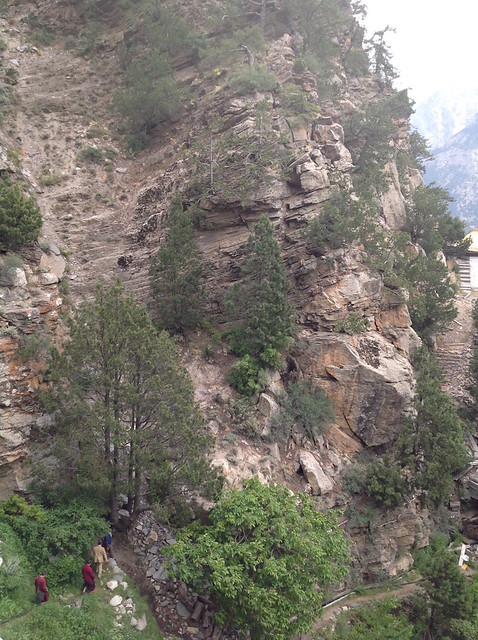 Our team at work near Kalpa, in Kinnaur, Himachal Pradesh. Photo by
Konchok Rinchen. From Core of Culture

At Dorje Dorak Gonpa in Shimla, the dorje lopon (master of rituals) explained that Cham visualization yoga is a mandatory tantric practice for all 161 monks living there, and there is a constant rotation of monk dancers. Several copies of the Chams Yig, or dance instruction manual for their monastery, are present in the library and are read by all the monks. This requirement for all monks to dance and further to read the Chams Yig is uncommon and quite intriguing.

Their recently deceased Tibetan root Lama Taglung Tsetrul Rinpoche (d. 2015), knew the name of every dance step and its role in visualization meditation. Following that example, at least two senior monks including the abbot and the dorje lopon with whom we spoke, also know the entire Cham repertory and its tantric application. So “walking encyclopedias” of Nyingma Cham augment the Chams Yig manuscript at Dorje Dorak Gonpa. The Cham, part of a systematic monastic memorization of tantric yoga and sacred scriptures, is as thoroughly memorized as a sutra would be, and serves as a signifier of accomplishment and rank. 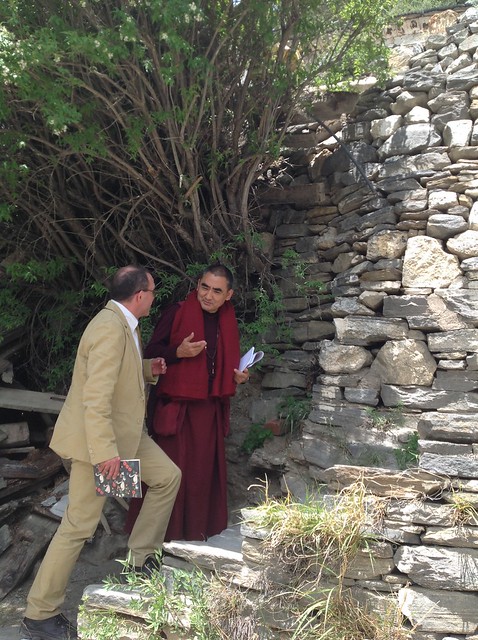 At Tashi Choeling Gonpa, a Drukpa Kagyu monastery in Kinnaur, Tulku Choegon Rinpoche explained the finer points of Cham practice and told me things that I had never heard before. The tulku (incarnate lama) explained that the origin of the word Cham is mysterious, and is distinctly concerned with deity yoga and the practice of making the Yidam Deity (deities used in meditation practice) move. “Cham refers to Deity Action alone. Other dances by dakinis, protectors, and saints, are ‘Gar,’ or offering dances, and of a different caliber.” He indicated that if the word is used correctly, better understanding will follow.

Choegon Rinpoche also revealed that Cham began in the early days of tantric Buddhism, when 10 yogis developed it as a force field to protect Vajrayana Buddhism forever, noting that, “Cham is not for the public, and tourists should not come to Cham festivals.” As I also heard from two other monasteries on this trip: “We don’t advertise the Cham ceremonies and we don’t invite anyone.”

The Cham lineages at Tashi Choeling were brought there by lamas escaping the Cultural Revolution’s devastation of Tibet: Choegyal Rinpoche in 1960 coming from a village near Lhasa, and Gar Rinpoche in 1962 fleeing from Kham. (The famous Hemis Monastery in Ladakh, of the Drukpa tradition and celebrated throughout the centuries for its Cham festivals, now performs the Cham brought in 1960 by Choegyal Rinpoche. Hemis does not perform Gar lineage Cham. One of the oddest things our research revealed was that no one at the monastery could remember what dances were performed before the Cham that exists today. Why “new” Tibetan dance lineages were adopted wholesale, replacing the previously existing Cham, was never explained to us.) Monasteries have long served as agents of yogic transmission, and the Cham performed at Tashi Choeling is much older than the monastery.

Like all successful research, more questions than answers were generated by our recent work. Here is an educative example showing how different monasteries of the same school rely on different dance lineages. There were no tourists at the Tashi Choeling Cham festival, and none are wanted. “Cham survived the Cultural Revolution and now is a time of opportunity to know about Cham, not a time of crisis—that time has passed,” said Choegon Rinpoche. “People of our generation (over 45) remember earlier times and ways and we have a problem with witnessing the changes in Cham. Young people? They are not having a problem. It is not only their time, it is their timing. They experience time in a way we could not imagine in our youth. We cannot make our problems with change the basis of assessments.”

The tulku explained that a copy of Chams Yig is available at the monastery, but noted that the instructions are not complex and the dance steps are not prioritized over the other skills in play: “The Deity Visualizations are complex. The movement is part of visualization realization practice first, [the] performed dance second. In a way, Cham treats the whole body as if it were a mudra (a symbolic or ritual gesture), which is also a whole mind-body movement.” This approach allows thangka paintings of deities dancing to have a direct relation to movement: “Cham yoga is the main method of Deity Action yoga. His Holiness the Dalai Lama dances Cham. Cham has already come through a period during which it was meant to be destroyed. I have no worries for future understanding.” The temple rooftop of Tashi Choeling Gonpa in Rarang. Perched high on a steep mountainside, it is remote and difficult to reach. Image courtesy of the author

That said, Choegon Rinpoche admitted that many younger monks do not have a full knowledge of Cham realization practice, and cannot see any benefit to themselves from publicly performing it. “The public performance comes to overshadow the connection to philosophy, and young monks too often experience the former before the latter, clouding the true purpose of Cham,” he said.