As Buddhist, Christian, and Shinto practitioners gathered in Hiroshima’s Peace Memorial Park on Monday to observe the 73rd anniversary of the world’s first nuclear attack and offer a prayer of remembrance for its victims, Hiroshima Mayor Kazumi Matsui made a fresh plea for global nuclear disarmament, and warned of the dangers posed by rising nationalism around the world.

Buddhist monastics and laypeople joined people of all faiths at the Hiroshima Peace Memorial Park at 6:15am on Monday as part of an interfaith service to remember those who lost their lives in the atomic bombing of Hiroshima at 8:15am on Monday, 6 August 1945 that incinerated the city. Three days later a second bomb was detonated over Nagasaki. The two nuclear blasts resulted in the deaths of more than 200,000 people, mostly civilians.

The interfaith assembly was followed by an official ceremony in the presence of Mayor Matsui, Japanese Prime Minister Shinzo Abe, United Nations Secretary General Antonio Guterres, and representatives of 85 countries. Across Japan, people observed a minute’s silence, and in Hiroshima a bell tolled at 8:15am, a somber reminder of the moment the bomb detonated.

“If the human family forgets history or stops confronting it, we could again commit a terrible error. That is precisely why we must continue talking about Hiroshima,” Mayor Matsui said in a strongly worded appeal. He added that for Japan, this meant leading the international community toward “dialogue and cooperation for a world without nuclear weapons.” (The Mainichi, AsiaNews.it) 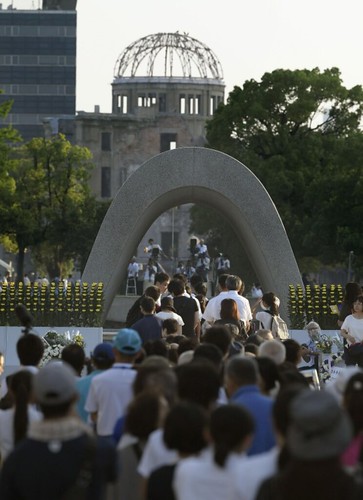 People pray in front of the Cenotaph at the Hiroshima
Peace Memorial Park as the city marks the 73rd
anniversary of the US atomic bombing. From mainichi.jp

“Certain countries are blatantly proclaiming self-centered nationalism and modernizing their nuclear arsenals, rekindling tensions that had eased with the end of the Cold War,” Matsui noted, Instead, he urged world leaders to negotiate in good faith to prohibit all nuclear weapons: “Efforts to eliminate nuclear weapons must continue.” (The Mainichi)

Referencing the landmark easing of tensions on the Korean Peninsula this year, Matsui expressed hope that global leaders would also engage in dialogue to work toward a comprehensive international treaty banning nuclear weapons.

In his own address, Prime Minister Abe observed that Japan had a responsibility to enable and encourage dialogue between nuclear and non-nuclear nations. “In recent years, it has become evident that gaps exist among countries about ways to proceed with nuclear arms reduction,” Abe said. “Our nation, while maintaining our [non-nuclear weapons] principles, will patiently work to serve as a bridge between the two sides and lead efforts by the international community” to reduce nuclear weapons. (Channel NewsAsia)

Some 15,000 nuclear weapons are estimated to still exist in the world, of which 9,400 are maintained in military arsenals, while the remainder are obsolete and due to be dismantled. Almost 4,000 are reported to be operationally available, with 1,800 ready for use on short notice. At the memorial service, Hiroshima Mayor Kazumi Matsui offers a new list of A-bomb dead, including those who died in the past year from the side effects of radiation. From channelnewsasia.com

Recalling the tragedy of that fateful day, one survivor of the Hiroshima blast, 86-year-old Tomoyoshi Kawasaki, recalled that he had been absent from school due to a stomachache on 6 August 1945 and had been resting at home in the neighboring town of Saka. “I saw a flashing light, which was followed by a boom seconds later. I felt my organs shake all over my body,” he related, remembering the sight of a giant mushroom cloud above the city of Hiroshima some 10 kilometers distant.

Kawasaki said he had headed into Hiroshima with his mother the following day in search of his aunt who lived in the city, and recalled the stench of burned flesh that had hung in the air, and the horror of disfigured bodies, including babies, piled around: “The sight still remains stuck in my head.” (The Mainichi)

“We have no choice but to accept natural disasters. But war is caused by human beings. We must avoid it at any cost,” he said. (The Mainichi)