The government of the Buddhist Kingdom of Bhutan yesterday announced its first national lockdown since the COVID-19 pandemic spread to the Himalayan nation after a 27-year-old woman, recently repatriated from Kuwait, tested positive for the coronavirus on Monday, following her release from quarantine and after coming into contact with several people in and around the capital city Thimphu.

“The government announces a nationwide lockdown starting today [11 August], following a report of a COVID-19 case in Gelephu who came in close contact with people in Thimphu, Gelephu, Paro, and those along the way,” the government said in an official statement that was shared over social media. “The unprecedented lockdown is enforced to identify and isolate all positive cases, immediately breaking the chain of transmission.”

“Everyone is asked to stay home to protect themselves and their families from the disease, should there be undetected, rampant transmission,” the government said.

The government has ordered the closure of all schools, institutions, and businesses, and called for school examinations to be postponed, with residents instructed not to leave their home districts.

Roughly 75 per cent of Bhutan’s population of some 770,000 people identify as Buddhists, according to the Washington, DC-based Pew Research Center, with Hindus accounting for the majority of the remaining 25 per cent. Most of Bhutan’s Buddhists follow either the Drukpa Kagyu or the Nyingma schools of Vajrayana Buddhism. Bhutan held its first elections as a constitutional monarchy in 2008.

The country was quick to adopt a comprehensive, evidence-based tracing and testing regime, soon after the SARS-CoV-2 coronavirus began spreading around the world, putting in place strict border controls and a three-week quarantine procedure for all returnees to avoid overloading its healthcare system. The coordinated response has been bolstered by the Bhutan’s traditional communal values—in which all levels of society, including the royal family, have acted in concert to observe social-distancing and support other response measures—and the country’s free universal healthcare system, a key aspect of the kingdom’s Gross National Happiness (GNH) philosophy.

The philosophy of GNH was introduced in the late 1970s by Bhutan’s fourth king, Jigme Singye Wangchuk. An alternative to traditional metrics for measuring national development, such as gross national product (GNP) and gross domestic product (GDP), GNH is founded on four underlying principles or pillars: good governance, sustainable socio-economic development, the preservation and promotion of culture, and environmental conservation.

Bhutan reported its first confirmed COVID-19 infection—a 76-year-old American tourist—on 5 March. On 14 March, the American was evacuated to the US by air ambulance. Although the repatriation of the patient at the time meant that Bhutan had no confirmed coronavirus infections, the prime minister announced on 20 March that the American tourist’s 57-year-old partner had also tested positive for COVID-19, becoming the kingdom’s second confirmed case.

The pandemic has dealt a crippling blow to the Himalayan kingdom’s tourism industry, which is a major source of revenue and employment, and has severely limited trade with neighboring India.

At the time of writing on 12 August, global confirmed COVID-19 infections were reported to have reached 20.29 million, with 741,380 deaths so far recorded and 12.6 million recovered.* The World Health Organization in March estimated the mortality rate from the SARS-CoV-2 coronavirus, believed to have originated in Wuhan, China, at 3–4 per cent, based on incomplete and preliminary data, with the elderly and people with underlying health conditions considered most at risk. More recent data suggests that the mortality rate may be significantly lower, however studies are inconclusive due to variations in COVID-19 testing procedures in different countries, and differing methodologies for classifying and reporting COVID-19 as a cause of death. 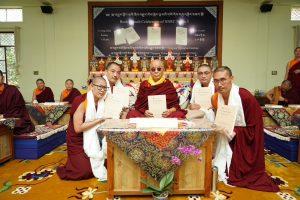