Waste collected by volunteers is dumped in crude landfills. From chinadialogue.com

The once-pristine high-altitude reaches of the Tibetan Plateau are rapidly falling victim to that most modern of scourges, growing mountains of manmade garbage that are polluting the Himalayan plains and grasslands, and recent reports suggest the situation is rapidly approaching a crisis point.

According to an analysis published by the Central Tibetan Administration (CTA), as few as 20 years ago, garbage was not a major issue on the expansive Tibet Plateau, and a significant proportion of domestic waste was managed and processed into manure for agricultural use. More recently, however, rampant littering is becoming widespread.

“With rapid urbanization and a massive influx of tourists in the region, Tibet stands at a critical junction in waste management,” said Zamlha Tempa Gyaltsen, an environment Research Fellow at the Tibet Policy Institute. “Unless the Chinese government takes a bold and effective course of action, the world’s highest plateau could plunge into the same fate as other developing countries. There is a high possibility of the garbage problem quickly spiraling out of control.” (Central Tibet Administration)

And while part of the problem can be attributed to the region’s booming tourism market—30 million tourists are expected to visit by 2020—urbanization and changing lifestyles are also to blame. The plateau’s traditionally nomadic people are increasingly adopting more modern tastes, moving away from a traditional diet of meat, butter tea, and natural produce in favor of processed foods sold in plastic packaging, which ends up discarded on the same grasslands they rely on to rear their livestock. • A lack of governance and basic waste management infrastructure.
• A lack of public awareness programs to teach the health and environmental impact of garbage.
• A lack of strict regulation of the tourism sector.

In recent years, livestock grazing on the pastures of the Ganjia grasslands, which borders the provinces of Gansu and Qinghai in the northeast of the plateau, have reportedly started dying unexpectedly—and plastic food packaging has been found in their stomachs.

One man who is taking a stand against the encroachment of litter is Tibetan Buddhist monk Sangay Gyatso, a firm believer that environmental protection is closely aligned with the Buddhist teachings.

“The core of our traditional culture is the foundation and motive for my work on environmental protection here,” said Sangay, who illustrated his point with the tradition Tibetan greeting, tashi delek. “The ‘ta’ in tashi delek means ecological balance,” he observed, explaining that maintaining a balance between human communities and the natural environment is a key concept in Tibetan Buddhism. (China Dialogue)

In 2013, Sangay, a lama from Labrang, the largest monastery in the traditional Tibetan region of Amdo, established the Ganjia Environmental Volunteers Association, organizing teams of local volunteer teams in regular garbage collection sorties in and around the village of Waerta village. 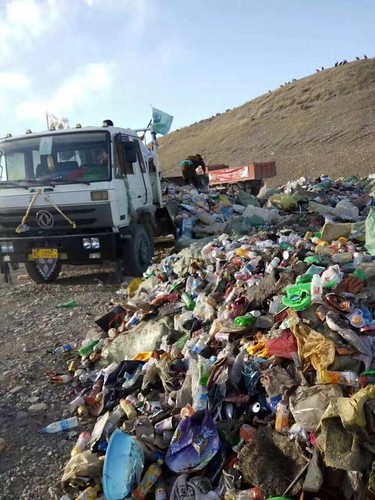 “If the government could invest a little more money and labor to build waste-sorting points in villages, so waste could be handled centrally, there’d be a bigger impact,” Sangay said. (China Dialogue)

The issue has also attracted entrepreneurial attention. Taiwan-based company Miniwiz has designed a mobile and solar-powered unit, the Trashpresso, to recycle plastics in remote areas. Last year, the company introduced  its system to Zaduo County in Qinghai, where a week’s worth of collected plastic garbage was recycled into environmentally friendly building materials. Miniwiz hopes its simple technology will help local residents understand that plastic waste can still be of use to the community.

Meanwhile, the authorities in the region are not afraid carry out regular clean-up blitzes at the highest altitudes, even when that means scaling Mount Everest (known in Tibetan as Chomolungma [ཇོ་མོ་གླང་མ]), which lies on the border between China and Nepal. In May last year, a team of  Chinese and international volunteers on the Chinese side spent nine days bringing down more than four tonnes of accumulated manmade waste from camps at altitudes between 5,200 and 6,500 meters.

Growing incursions by human activity have introduced a significant level of garbage, said Nyima Cering, deputy director of the Tibet Sports Administration (TSA), who noted that it was the first time the TSA had worked on the initiative with the government of Tingri County in Xigaze Prefecture. Tourism is a major source of plastic waste, even at the highest altitudes. From america.cgtn.com

“Amid global climate change and rising average temperatures in on the roof of the world, increasing human activities and abundance of food products packaged in plastics, the plateau is inundated with unregulated garbage disposal by tourists, pilgrims and construction workers,” Gyaltsen warned. “The traditional ways of waste management no longer remain a viable solution.” (Tibet Policy Institute)

The litter-collecting monk of Tibet (China Dialogue)
The Real Cause behind Tibet’s Garbage Crisis (Central Tibet Administration)
Garbage Rampage in Tibet (Tibet Policy Institute)
From the Pacific islands to the mountains of Tibet, trash is piling up (CGTN America)