In a first of its kind retreat, survivors of mass shootings and family members who lost loved ones joined together from 5–8 August in central Massachusetts for meditation, coping, and community. Buddhist teacher Sharon Salzberg and mindfulness instructor Shelly Tygielski led the retreat, hosted at the Barre Center for Buddhist Studies in the town of Barre.

Present were family members of victims of the October 2018 Tree of Life synagogue shooting in Pittsburg last October, as well as people who lost loved ones in mass shootings in Parkland, Florida; Columbine, Coloradao; Aurora, Colorado; Las Vegas, Nevada; and elsewhere. Also present were five women from Chicago whose sons had been killed in gun violence in separate events. These women were part of a group called Purpose Over Pain, a parent advocacy group responding to gun violence.

The three-day retreat offered survivors and family members coping mechanisms to work with the unique suffering wrought by these traumatic events in a community of support and shared experiences. Forty-three people came from across the United States to meditate in the company of a dozen therapists and meditation instructors.

“To meet with other families who had been through this made a huge difference,” said Marnie Fienberg, daughter-in-law of Joyce Fienberg, one of the 11 people murdered in the mass shooting in Pittsburg. “You wanted to connect with them.” (Pittsburg Jewish Chronicle) The idea for the retreat came from Sharon Salzberg, a founder and regular teacher at the Insight Meditation Society in Barre, along with Shelly Tygielski, a mindfulness teacher from Broward County, Florida, who has been working with those impacted by the February 2018 shootings at Marjory Stoneman Douglas High School in Parkland, Florida. The goal was originally to host a healing retreat for those affected by the Florida shooting, but after those survivors met with survivors from the Tree of Life earlier this year, the idea was conceived to include them, and then it was opened to survivors from other shootings as well.

Leigh Stein, whose father, Dan Stein, was murdered in the attack at the Tree of Life building, was grateful for the opportunity, seeing it as “a chance to learn helpful tools and surround myself with others that understood my thoughts in a peaceful and calm environment—without even saying one word.” She reflected, “It was exactly what I needed and could not have come at a better time, just days after the El Paso and Dayton shootings. It was comforting to be in the company of others that just ‘get it’ and are unfortunately in my shoes.” (Pittsburg Jewish Chronicle)

Tygielski stressed the importance of stepping into peaceful surroundings and being surrounded by people who understood their suffering, “We thought it would be really great to get people out of their element and really feel like they are in a safe container, that they are removed from their day-to-day environment for several days and, more importantly, that they are around people that they don’t have to wear a mask around,” she told the Pittsburg Jewish Chronicle. “And they don’t have to explain anything because everybody that’s there understands their story, the language of loss, the depth of their grief.” (Pittsburg Jewish Chronicle)

Ellen Leger, whose husband Dan Leger was shot and seriously injured in Pittsburg appreciated the understanding that came from others who experienced similar events. “They can pass down information,” Leger said. “Like one girl from Las Vegas, she kept telling us from the beginning, ‘You are coming up to your one-year anniversary, be ready for it, it’s going to be terrible, it’s going to be difficult but you are going to get through it,’ because she just went through it. There is nobody else out there who can say that to us and really know. These people really get it, and they understand the ups and downs.” (Pittsburg Jewish Chronicle) 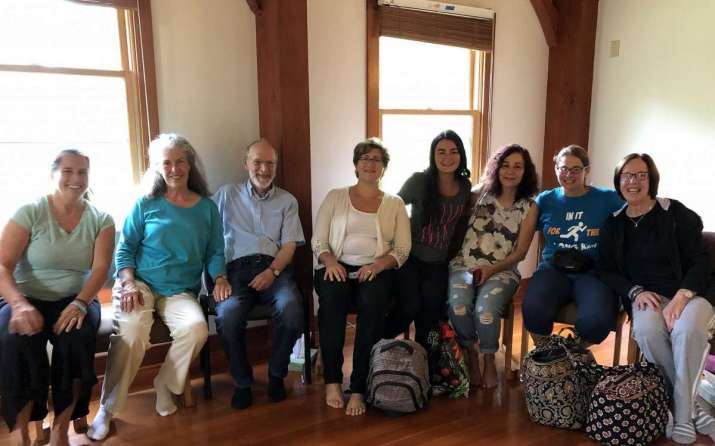 Survivors and family members from Pittsburgh's Tree of Life Synagogue at the Barre Center for Buddhist Studies. From jewishchronicle.timesofisrael.com

Writing of the retreat, Tygielski said, “My heroine, my teacher, my friend Sharon Salzberg has taught me that the human capacity to endure—and to do it with grace, courage, and joy—does not really depend on anything outside of ourselves. Even when life seems impossible, the brilliant light inside of ourselves is enough to see our way through our darkest nights.” (Facebook)

Reflecting on the uncharted territory of the retreat, Tygielski noted that she hopes to create something that can be replicated in future years. She and Salzberg have launched a fundraising campaign to help fund a 2020 event.

Spiritual Bypassing and the Dangers of Unresolved Emotional Wounds
The Medicine Buddha and the Power of Healing
Bringing Awareness Practice from Retreat into the World
Buddhistdoor View: Honoring the Lessons of Martin Luther King Jr. for Today’s World
Intimacy, Humility, and Stillness: The Perfection of Wisdom