What are these Statues for? Sometimes a certain fond memory resurrects in my heart no matter how much time has passed. In it a young boy, an inexperienced pilgrim, is walking through the snow on his way to pay a visit to the famous statue of Avalokiteshvara (Tib: Chenrezig) in Gyalmo Tsawarung, Tibet. That young boy was me. Yet, though vivid, this memory feels like a distant lifetime, another incarnation.

This memory has been an invisible thread running through my life, binding me to that little boy as one individual who is always morphing and flowing like a river. When I finally saw that beautiful statue for the first time, an almost indescribable wave of joy washed over my heart. It is hard to recreate that sense of joy even though my mind wants to; like a heavenly ambrosia once tasted, our tongue never forgets. Such joy will invariably dispel any sorrow that lingers in my heart for a moment. We all miss those golden times from our early life when our innocent hearts were always open to receive life.

Now, I’m part of the Dharmata community, an international sangha that has satellite practice groups in different parts of the world. Under its umbrella I have been playing the role of a Dharma teacher. Wonderful Dharma teachers from various lineages have given precious teachings to this sangha. Many people who are part of this sangha can easily be described as open-minded when it comes to their own spirituality, and they tend not to harbor dogmatic or fundamentalist outlooks. They are beautiful manifestations of the deep-rooted changes blossoming in the societies of developed countries throughout the world.

Recently, some of us were discussing how to arrange the meditation areas of our regional sanghas, with the intention of creating a standardized design to ease the confusion over how to create a sacred and contemplative environment. We decided to create a thangka that can be used as the main image for all our practice groups. In that way, they can have a simple and minimalistic style that expresses the spirit of Buddha-sasana and the lineage from which we all benefit tremendously, due to its timeless wisdom and skillful means. The thangka includes Shakyamuni Buddha, Padmasambhava, Mandarava, Yeshe Tsogyal, and some Dzogchen masters. There are occasions when our community conducts Vajrayana practices and we create an altar in accordance with whatever sadhana* we are doing, using images of tantric deities, tormas,** and other offerings.

There is often some debate about when the first image of the Buddha was created, but one certainty is that people wanted to remember the Buddha and his teaching, and out of that desire his image was created. It is fascinating to see the different depictions of the Buddha created by people with their own cultural aesthetics. The forms of the Buddha created in ancient China have quite a different appearance to those from the Ghandara dynasty of South Asia. As time went by, depictions of arhats and bodhisattvas came into being as expressions of reverence toward noble ones who had also awakened in the footsteps of the Buddha. As time went by, each linage created sacred presentations of their own masters for the same reason.

These sacred depictions are not merely random artistic creations. They are usually carefully created to express the heterogeneity of enlightenment. Let us take as an example the image of Avalokiteshvara, who is often depicted with four arms. These are not meaningless appendages added to make him look supernatural; they signify the Four Immeasurables—love, compassion, sympathetic joy, and equanimity. 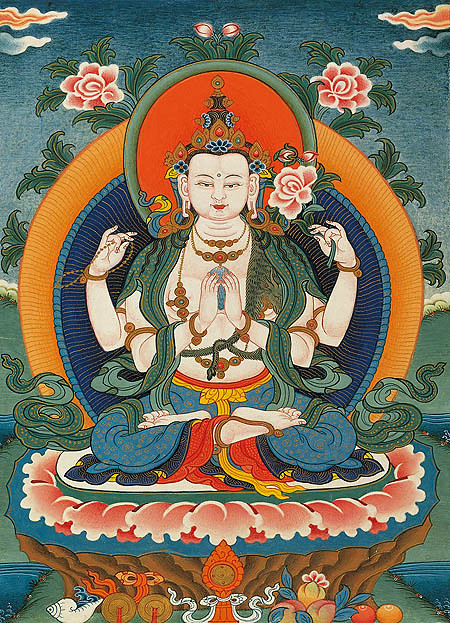 It is very important that we remember the real significance of these images. For example, there are two main Vajrayana practices, the first of which is utpatti-krama, also known as the generation stage, which involves creating mandalas and deities in realm form or in visualization. An important principle is the “remembrance of sacred significances,” which involves reflecting on the profound and subtle meanings that those divine forms represent. In the end, each of these sacred images points out a dharma that can only be developed and realized within each of us.

The point is that people should understand that these Buddhist images have a purpose as a catalyst for turning intention inward and cultivating the Dharma of love and wisdom, as well as awakening us to our true nature. Many lay Buddhists often lack the education to understand these principles. Personally, I feel that it is necessary for Dharma teachers and the monastic sangha to provide lay people with a proper understanding of what these sacred images represent. In this way, these beautiful images can become allies assisting our personal Dharma practice without taking our attention away from what truly matters. Otherwise, there is a danger of inadvertently compromising our real Dharma practice by simply worshiping images, which can easily slip into a form of idolatry.

One of the most studied texts in Mahayana, the Uttaratantra Shastra,*** is regarded as an authoritative commentary on the notion of Buddha-nature. It states that only the Buddha is the ultimate refuge among the three jewels. This can sound shockingly radical, even to some Buddhists. Of course, it does not reject the role of the Dharma or the Sangha in refuge. It also refers to a buddha that is outside ourselves, but that can be awakened within each of us. This idea is a powerful reminder for us not to forget to keep turning our intention inward through contemplation on the path to Nirvana.

* One of the primary meditation techniques of Tantric Buddhism.

** A ritual “cake,” often hand-molded from butter and roasted barley flour and colored with dyes, that comes in many shapes depending on purpose and intended symbolism.

*** Treatise on the Sublime Continuum, also known as the Ratnagotravibhaga.