“We Have All Made Mistakes” - Teaching Mindfulness in Prisons: A Different Kind of Rehabilitation Born in Hong Kong and based in Chilliwack, British Columbia, since 1994, Venerable Yin Kit Sik (also known as Sister Jessie) ordained as a Buddhist nun in Hong Kong in 1992 following a successful career as a podiatrist. Having begun teaching meditation in 2003, she started going in to prisons and now teaches mindfulness meditation to inmates on a regular basis. Buddhistdoor caught up with Ven. Yin Kit on a recent visit to Hong Kong.

Buddhistdoor: Why did you decide to work with prison inmates?

Ven. Yin Kit: It just came up. I was invited by a psychiatric nurse to go in to prison to teach a self-care program to inmates who are healthy to look after inmates who are physically sick. I thought the best self-care was developing self-awareness, so I started teaching them mindfulness meditation. After we finished the initial two-year program, there was a request from inmates for me to keep going in. Those who had taken classes from me felt that it was very helpful—that they could calm themselves down, be less stressed, less reactive.

BD: How often do you go in?

VYK: I started going in once a month during the day, but the inmates said it was too little. Also, during the day they run all sorts of other programs for inmates, like anger management, and also they have designated jobs. So during the day hardly anybody can come to the meditation. Then a free slot appeared in the chapel on Thursday evening, so we started every Thursday.

BD: It’s interesting that you hold it in the chapel. Is it considered a religious activity?

VYK: No. I didn’t really want to do it in the chapel, but I didn’t have access to any program rooms after office hours. But it’s a neutral place and quite nice, nobody’s there, and it’s a place for respect, so I thought it could be quite conducive.

BD: Did they know it was a practice coming from Buddhism?

VYK: Yes. Very obvious, for me [as a nun in robes] to go in, to teach. They mostly don’t react, but there was one who said, “Are you trying to convert me?” And I said, “No, I don’t believe in that kind of conversion. But I’m here to convert you from being an unhappy person to a happy person.”

BD: Do you teach in women’s prisons as well?

VYK: Right now the prisons where I teach are all male. I want to go in to the women, but it’s very difficult. I don’t know why, but they just don’t want anybody to go in. I am still trying. 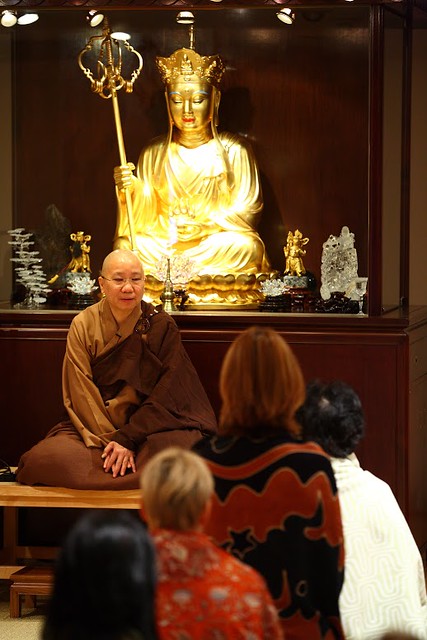 BD: How many inmates do you get on average?

VYK: Now on a regular basis since last year we have about 8–12 every week—quite a regular group. Every other month we have a full day mindfulness meditation retreat, and we also have about 8–12. It’s a silent retreat. They are good at maintaining silence—they really treasure the opportunity. When they do mindful walking, they are so mindful you cannot hear a footstep. And the energy is so strong, it’s really amazing. I always tell them, “You are in here, and you cannot get out until the time is up. Why don’t you try to turn your prison cell into a meditation cell? If you constantly think of it as a prison cell it’s always duhkha—suffering. But if you turn it into a meditation cell, then at least for a moment you will have a glimpse of freedom and joy, because you let go of that negativity.”

BD: Do you think they practice?

VYK: They do—every day. Morning and evening they do it in their own cell, when they are locked up. Otherwise you wouldn’t see the changes. It’s really inspiring. They appreciate it because they know that we are not getting paid. On Sunday meditation retreat we always have three people—me, and two householders, who both have families. The inmates know they are actually giving up their family time to go and spend time with them. This time, Thursday fell on 31 December, New Year’s Eve. After the first hour, they said, “You guys go home. You spent an hour with us, now please go home and tell your family ‘thank you’ for sharing you with us. We are very grateful.” You see, you bring all the good traits of human existence out of them—not by punishment, penalty, or harsh suppression. It’s really by compassion. That happens all the time.

BD: Do you keep in touch with the inmates?

VYK: I have a few who write. And we also have inmates coming to our center, those who are on escort travel though still in the prison. They get approval to come every Tuesday night for Dharma group teachings. Those are very good for them to start connecting with people outside, and to let people outside understand who they are and not look at them with such a colored lens.

BD: How do the people on the outside respond to that?

VYK: I told the congregation, “These people have made mistakes. We have all made mistakes. Can we support them as a congregation? Because this is what the practice is about—the whole practice of the Buddha’s teaching—to be compassionate and to embrace each other’s shortcomings.” And I said, “They won’t come in shackles and chains because this is one of the conditions that I asked. I know they have to abide by the law, but I think every time the handcuffs are put on there is a drop in self-esteem and self-confidence, and also thinking that they are no good.” The officer will stay outside reading a book, or stay inside having a cup of tea. They don’t stay in the hall. These guys are very good guys who come out. Yes, they have been murderers, sex offenders, but they are not now. Actually, the whole congregation has felt very comfortable with them. They come regularly until they are released. I can see hope for different kinds of rehabilitation—not merely locking them up and bombarding them with all sorts of programs. I really see that there is light in there, but there’s just me and the group of volunteers. We are trying our best. 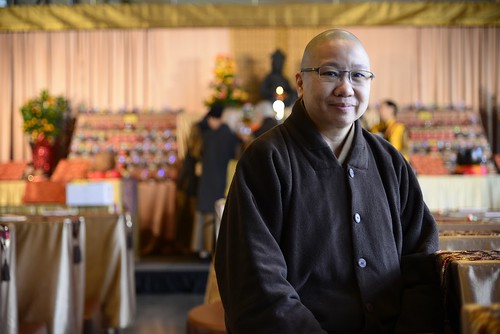 BD: Going back to the mindfulness teaching itself, what form does it take?

VYK: Firstly, it involves the breath. Initially I teach them to be mindful of the present, but how could you be mindful of the present? It’s by using your body, because your body is right here, right now. The mind is somewhere else all the time, but the body is sitting here. So you have to train the mind to be in the present using this body—how you sit, how you kneel . . . Even though you are sitting on a chair, how do you feel? Does your body sink into the mat? Starting to go into that a little bit, and then going into the breath. When they are more focused on the breath, they start to be able to observe the mind. How are the thoughts coming, what is their nature? How does the thought exist? It comes and goes—that’s impermanence. It’s ever-changing, isn’t it, so why are you so attached to it? And even the breath, the sensation, the addiction that you have. You are addicted to the sensation that you feel through the drugs and alcohol. It’s not the drugs or alcohol—it’s the feelings that you get from them that are addictive. You want to get back that kind of feeling. So this is how I teach.

BD: Have you ever had any negative reactions, when they see what their mind is like?

VYK: They hate themselves.

BD: How do you help them deal with that?

VYK: Equanimity. Just openly accept your own shortcomings. And also, seeing them, that means there is a way out. If you see that you have a problem, that means you can find a solution to the problem. It’s good that it’s surfacing, bubbling up. That means there is a way to deal with it without reacting, because when you react, you’re actually strengthening it. I tell them just to sit and watch, just sit and feel. And also when you have this bubbling up, there is always something coming up, in the breath, in the body, because the mind and the body are totally connected. So when you watch the physical it’s so tangible, because the breath is so tangible, bodily sensations are so tangible, and you won’t go crazy. But if you’re watching emotions, the emotion could be so strong that you are swept away. Because when you think you’re a bad guy, that negativity will make you so depressed. Or if you’re angry, the anger becomes so overpowering there’s no way that you can come out. But if you’re just trying to stay put with your breath, trying to stay put in this body, eventually you will see, oh yes, it’s that strong now but then it calms down. You start to see the changes but not react to them. That’s the trick. I feel that working with the mind is the most effective way out of their own sufferings, guilt feelings, or anger. Eventually they need to develop this skill.

BD: Do they share with you what’s coming up for them?

VYK: Oh yes, but mostly in private. We have established a very strong trust.

BD: They trust you because you respect them as human beings.

VYK: Yes—that’s very important. I don’t need to believe whether you’ve committed the crime or not—it’s none of my business. You’re just a human being. Whatever you have done is in the past—it doesn’t mean that you are still that kind of person. I respect you for what you are right now. I respect what the Buddha said—that you all have a good nature in your heart. One day I hope that good nature will come up. That is what I’m doing, hopefully— being a catalyst for that process. Hopefully it will happen a little bit faster! 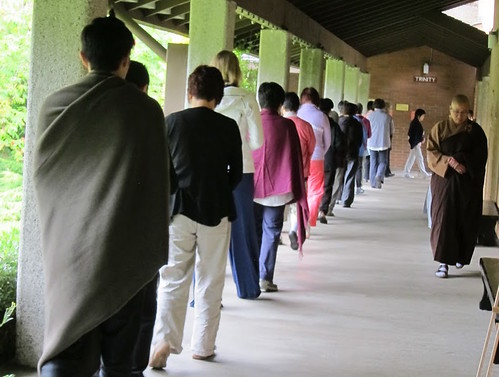 BD: Have you seen good results?

VYK: Oh yes. My students don’t come back to the prison after they are released. Some of the students who have been released still keep in touch with me and get support and advice from me. Canada is vast, and it’s very difficult for them to come and meditate with us. I send them personal CDs of guided meditation. This is how I can support them.

BD: Presumably a sense of hopelessness is a big issue among the prisoners.

VYK: Hopelessness and worthlessness. There is no death penalty in Canada, but some of the young ones that I know have two or three life sentences, and they’re only in their twenties. What is there for them in life after they come out? Some of them are lucky to be in the old system, where they can serve the two life sentences concurrently and apply for parole after 25 years, but a few years ago they changed that legislation and now they cannot serve concurrently. Two life sentences means 50 years in prison.

VYK: If we don’t look at this problem earnestly and try to change it, we will be forced to build more physical prisons. It’s a vicious cycle. But the prison industry is a big business—there’s a lot of money to be made in building and sustaining prisons.

BD: You teach mindfulness in schools, too. Perhaps that is the key to fewer crimes.

VYK: Definitely. If they don’t build up that sobriety in the mind as children, eventually they can go the wrong way. I teach them “mindfulness games,” which I am trying to put together in a book so that all the teachers can use it. I think it will be very helpful for the next generation.