“My goal is to build a systematic collection that illustrates how Buddhist art evolved from ancient India to China,” collector Zhou Mingqun said to me at his gallery in Shanghai. Zhou Mingqun was born in northeastern China and is of Manchu ethnic descent. Over the years, he has gradually withdrawn from his corporate responsibilities and focused on his art pursuits. In Mr. Zhou’s collection, one can find Chinese Buddhist sculptures ranging from the Northern and Southern dynasties (420–589) up to the Qing Dynasty (1644–1911), and sculptures from India and the Himalayas that influenced early Chinese Buddhist art. In early 2000, Zhou Mingqun started collecting ceramics, which remains one of the largest categories on the Chinese art market in terms of both numbers and prices. His favorites are pieces from the Song dynasty. Song ceramics are known for their refined forms and pure glazes, which were influenced by Chan Buddhism and represented the aesthetic preferences of the era’s scholar-officials. They were used not only as practical objects in tea ceremony and flower arrangement, but also as sacred vessels in rituals.

Each year, Mr. Zhou travels around the world looking for good pieces at auctions and dealers. His interest in Buddhist sculpture took off in 2012 at a Chinese art sale at Christie’s New York. While he was examining some ceramic pieces, his eye was suddenly drawn to a bronze statue of Manjushri, bodhisattva of wisdom. The statue is inscribed with the words, “assembled in veneration under Qianlong’s reign of the Great Qing” (大清乾隆年敬裝). The rare wording of “assembled” indicates that the sculpture was possibly consecrated or re-consecrated in an imperial ritual where sacred contents were sealed in the hollow-cast statue.

Mr. Zhou had never bought any Buddhist art before and had very limited knowledge of the genre. However, he is a descendant of the members of the Bordered Yellow Banner, which was under the direct command of the Manchu Qing emperors, and knew that the Manchus, including the Qianlong Emperor himself, often traced their origin to Bodhisattva Manjushri. Therefore, he found instant affinity with the statue and decided to give it a try. While the statue was estimated between US$40,000 and US$60,000, the price quickly shot up due to its rarity. After a round of fierce bidding, Mr. Zhou eventually obtained the Manjushri statue for US$842,500. A parcel-gilt bronze figure of Manjushri and detail of the inscription, H: 35.5 cm, Qing Dynasty. Image courtesy of the collector

Since then, Mr. Zhou has devoted much of his time to the learning and collecting of Buddhist art. Many collectors choose to refrain from religious arts, because such an interest often requires sophisticated knowledge of the history and iconography of a religion. This is particularly the case with Buddhism, as styles, techniques, and subject matter vary significantly across different schools and geographic regions. Mr. Zhou has been frequenting Buddhist collections in museums and at established dealers across the globe. He has Yixi Pingcuo, a leading authority on Buddhist sculpture in China, as his art advisor. He also went on a study trip to India with curators of the Rubin Museum in New York. While studying these objects and sites, Mr. Zhou also learned about how the West has constructed a system of cultural artifacts between museums, academia, private collections, and the art market.

While most Chinese collectors compete for bronze Buddhist sculptures of Sino-Tibetan style manufactured for the Ming and Qing imperial courts, or stone pieces carved before the Tang dynasty, Mr. Zhou extends his interest beyond China. He thinks that it is almost impossible to define a Chinese style, since Buddhism was originally from India, and moreover, different Buddhist traditions and artistic styles have intertwined throughout history. Zhou commented, “For instance, Northern Qi sculpture art was influenced by that of Gupta; Northern Wei was influenced by Gandhara and Gupta. When it comes to Buddhist sculptures of the Tang dynasty, you find a lot of Central Asian influences. Imperial pieces of the Ming and Qing dynasties strictly complied to the standards prescribed by Tibetan Buddhism, while the Tibetans also copied prototypes from India, Nepal, Kashmir, and Swat Valley.” A fragment of Shakyamuni Buddha, Gandhara, 2nd-3rd century. Image courtesy of the collector

In fact, in terms of sculpture art, Mr. Zhou prefers that of India. He said, “compared to the subtle beauty of Song ceramics, Indian sculptures look indeed more voluptuous and exaggerated, but I appreciate them for their dynamic and expressive features.” One of Mr. Zhou’s favorite pieces is a 7th century bronze statue of Maitreya whose origin has been traced back to Nalanda in Northeast India. Nalanda was a renowned Buddhist university and monastery from 5th century to the 12th century, and it was documented in the travelogues of Chinese pilgrims such as Xuanzang (602–64) and Yijing (635–713). “When I got the statue at a modest price at an auction, John Guy, curator of South and Southeast Asian art of the Metropolitan Museum of Art ("the Met"), who was sitting in front of me in the room, turned back to congratulate me,” said Mr. Zhou, smiling. “I know such a rare piece can be hardly found even at the Met or in museums around India.” A bronze figure of Maitreya, Nalanda, 7th century. Image courtesy of the collector

Another gem in Mr. Zhou’s collection is a statue of Avalokiteshvara. 71.8 centimeters in height, the figure is cast in bronze and the eyes inlaid with silver. Dr. Amy Heller, a specialist in Tibetan art, associated this one to a group of statues made by Kashmiri artists under the commission of the king of Guge in Western Tibet in the 10th century. After Mr. Zhou obtained this spectacular piece, people like Von Schroeder Ulrich, a world-renowned dealer of Buddhist art, and Jeff Watt, director of Himalayan Art Resources, have been visiting him in Shanghai to study this exemplar of the Kashmir style. 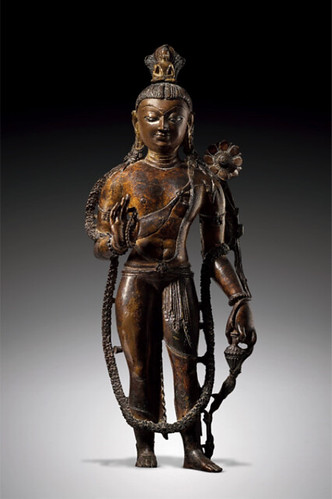 Over the past few years, prices for Buddhist artworks have rocketed. “In just two years, the price of a sculpture can soar up six times,” Mr. Zhou observed. As more and more collectors have shifted their attention to Buddhist art, he has had to slow down his collecting. Over the long term, Mr. Zhou hopes to open a museum with his collection of Buddhist sculptures. When we discussed the repatriation of Chinese antiques, Mr. Zhou admitted that he is quite open-minded about it. He believes that no matter where these artifacts are, their Chinese origin is a self-evident fact. Mr. Zhou commented, “We have many treasures dispersed in art museums in the west, but it has been proved that they have served the good purpose of promoting Chinese art overseas.”

Since Mr. Zhou started collecting Buddhist art, he’s also grown more interested in Buddhism itself. He said: “Confucianism is concerned with the relation between people and society; Daoism is concerned with the relation between humanity and nature; Buddhism focuses on self-cultivation. I believe Buddhism can solve all our problems.” As a member of Lions Clubs International, Mr. Zhou also follows the Buddhist teachings of compassion and giving. Along with his wife, who is Christian, he has donated to charity organizations and sponsored children in China for their education. Mr. Zhou added: “All religions cultivate virtue and kindness in people.” 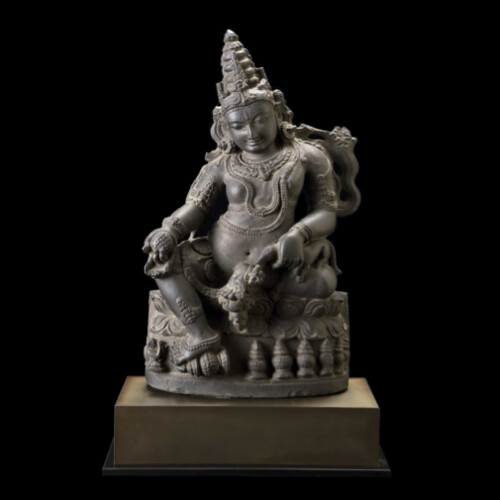