The transmission of Buddhist art from India to China is a fascinating topic. Indeed, how did pious and profound art, along with a complex belief system, transform between two sophisticated civilizations over more than a millennium?

What we know about the Buddhist transmission today is mainly derived from texts preserved in Chinese, including travelogues by eminent monks, their biographies, and translated sutras. Nevertheless, as Erik Zürcher (1928–2008), author of The Buddhist Conquest of China, remarked, these materials reveal little about the ways in which visual representations were spread when Buddhism was introduced to China from India. The ongoing exhibition Across the Silk Road: Gupta Sculptures and their Chinese Counterparts during 400–700 CE at the Palace Museum in Beijing is a rare opportunity to view 56 Indian sculptures and 119 Chinese Buddhist sculptures presented all at once. The exhibition, which opened on 28 September, is intended to showcase the regional characteristics and diversity in the diffusion and development of Buddhist sculptural art within two countries respectively as well as across borders. 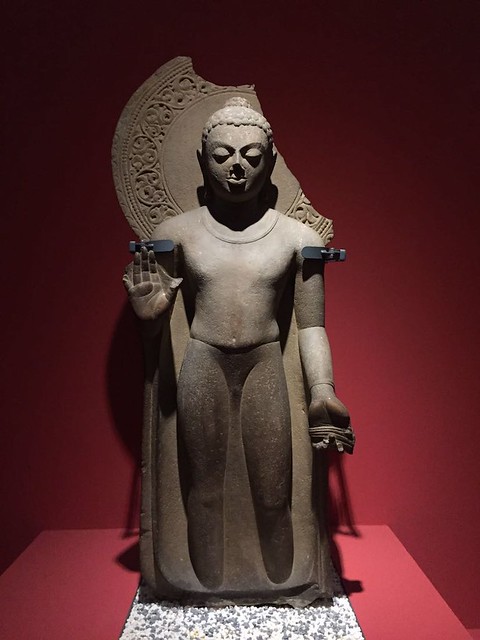 The timeframe of 400–700 covers most of the Gupta period (4th–6th century), which is considered the golden age of art in Indian history. For China, this period stretches from the Northern Wei dynasty (386–534) to the early Tang, when Buddhist art truly took root and flourished in this foreign land. Moreover, it was during these 300 years that eminent monks such as Faxian (c. 337–c. 422), Xuanzang (c. 602–64), and Yijing (635–713) set out on pilgrimages from China to India. Their detailed travelogues contribute greatly to our knowledge of the Gupta empire as well as the Buddhist transmission. In the exhibition, all of the sculptures were sourced from museum collections outside of Beijing. The Indian exhibits, of Buddhist, Hindu, and Jain origins, come from the states of Chhattisgarh, Gujarat, Madhya Pradesh, and Uttar Pradesh, while their Chinese counterparts are from the provinces of Gansu, Hebei, Henan, Shaanxi, Shandong, Shanxi, Sichuan, and Xinjiang. They are grouped and displayed by region rather than in chronological order. 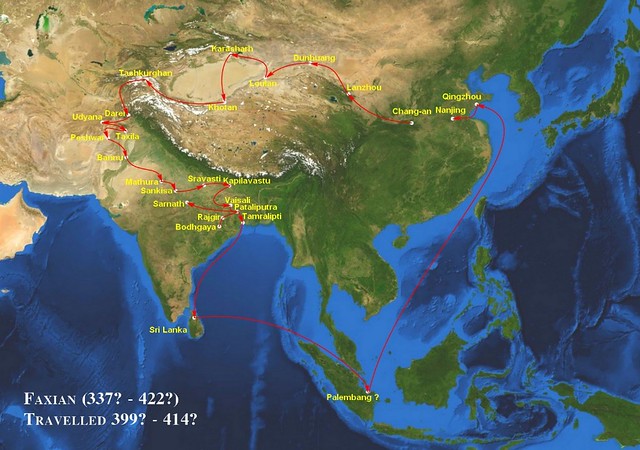 Walking through the exhibition is a humbling and inspiring experience. Lively representations of Hindu gods and tales, in contrast to the much more solemn images of the Buddha, demonstrate the superb craftsmanship and vibrant creativity in ancient India. Moreover, the juxtaposition of Buddhist sculptures from various regions offers an opportunity for the audience to compare the styles, media, and iconography. It also enables curious minds to investigate how different parts of China developed their unique styles, combining local art traditions and influences from multiple directions. For instance, among the sculptures unearthed in Qingzhou, a city in Shandong Province on the east coast of China, there are examples with a slender body, a mysterious smile, and Chinese garments, which is typical to the region. We also see Buddha images clearly influenced by their Sarnath precedents, featuring curled coils of hair, a robe that adheres closely to the body, and a countenance of deep contemplation. However, Buddhist sculptures in this style are rarely found in central China. Amid the current scholarly focus on the importance of Central Asia in the transmission of Buddhism, Qingzhou sculptures seem to draw our attention to the significance of the Maritime Silk Road, or southern land routes that were unmediated by Central Asia. Prof. Wenhua Luo, the curator of this exhibition, pointed out to me that when Faxian returned to China in 412, he traveled by sea and landed in Qingzhou; there might have been much more Buddhist activity in the area than what we know today. 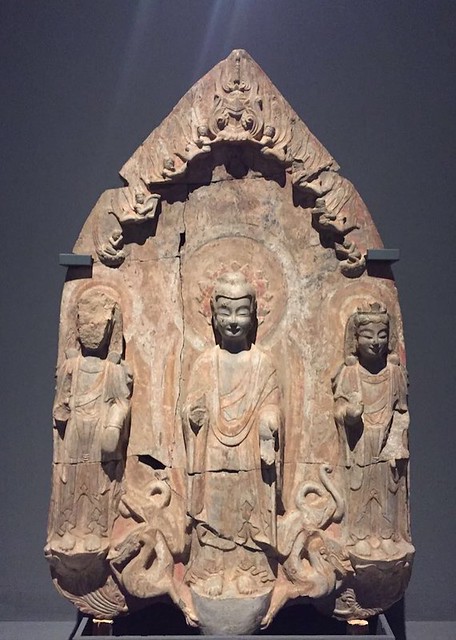 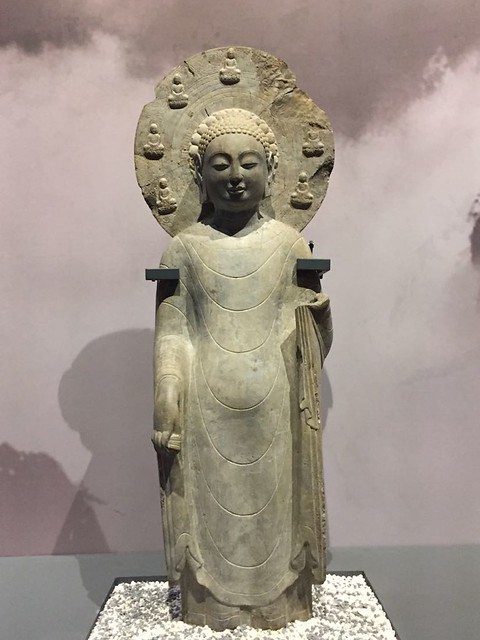 Many masterpieces in the exhibition were excavated in Sichuan Province, further east toward the Himalayas. One of the highlights is the so-called “Ashoka statue” dated to 551. The name refers to a Buddha image commissioned by the emperor Ashoka (r. c. 268–c.232 BCE) and later copies modeled on that. The statue is mentioned in several Chinese Buddhist texts, but this sculpture on display is the earliest known example in existence. The robe of the Buddha is in the Mathura style, while his facial features are evidently inspired by Gandhara art. Traces of generous gilding are also preserved. According to the inscription on its back, this statue was made for the deceased son of the donor. No matter how the iconography and style of Buddhist sculpture evolved in different cultural traditions, its importance never changed. Images of Buddhas and bodhisattvas are not only the focus of worship. The very action of creating them is to accumulate merit. This merit can also be transferred to loved ones, either in this world or in another. 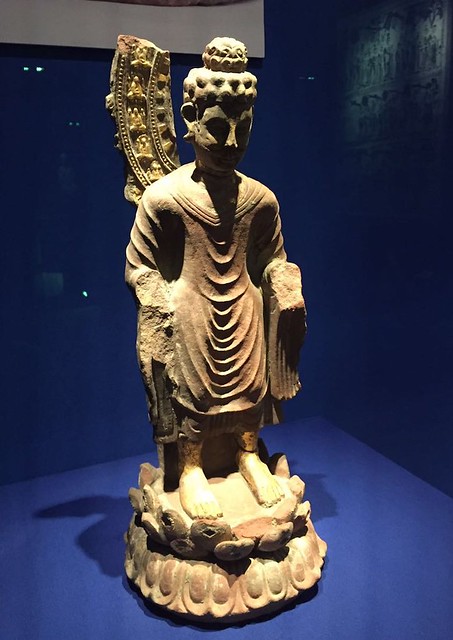 The idea of showing Gupta Buddhist art in China came up in 2014 at a meeting of the directors of the Palace Museum and the National Museum in New Delhi. However, preparation and execution of the exhibition took two and a half years to accomplish. When Prof. Luo, a leading expert on Himalayan art at the Palace Museum, was chosen as the curator, he could only find in Beijing a couple of publications on Gupta art in Japanese and English. Chinese academia, on the other hand, has produced little literature on the subject in recent decades. In fact, the word “Gupta” is probably unfamiliar to most Chinese. Moreover, in contemporary China, the degree to which Chinese Buddhist art was profoundly influenced by India in ancient times has not been fully recognized. Indeed, while Buddhism declined in India in the early 13th century, it gradually integrated into Chinese culture and remains one of the country’s major faiths. As early as the Song dynasty (960–1279), prominent monk Zanning (919–1001) even proposed to Emperor Taizong (939–97) a reversion of Buddhist transmission from China back to India.

Therefore, the exhibition is promoting cultural exchange and mutual understanding between China and India, especially with the resurgence of Buddhism in China and growing interest in India as a destination of tourism and pilgrimage. Prof. Luo and his team have spent considerable time researching Gupta art. Besides building up a library, they studied 19 museums and 13 Buddhist sites in India for the exhibition. One can appreciate their hard work in the handsome two-volume exhibition catalogue published in both Chinese and English. From 17–19 November, the team also organized an international symposium that brought together scholars from China, Europe, India, and North America. Meridian Galleries at the Palace Museum, Beijing. Image courtesy of the author

The exhibition will continue until 3 January 2017 at the Meridian Gate Galleries. Images of each sculpture on display have been published on the museum’s website, and a 3D virtual tour of the exhibition is also available online.