Our relationship with our body, in general, is unhealthy since our view toward it tends to be not only flawed, but even negative in a way that can be harsh and unkind. Many organized religions have a reputation for being “anti-body.” In his book Walking Words, the Uruguayan writer Eduardo Galeano (1940–2015) understood this problem clearly and summarized it in a poem that pointed out these unnatural and unhealthy attitudes toward the body that are prevalent in both religious and secular society:

There is a deep-seated misunderstanding that our body is mundane and impure, while our soul is pure and the essence of who we are, trapped in a prison of flesh and bone. Many spiritual traditions have introduced ascetic practices that appear to abuse the body. Even today, there are ascetics in India who engage in observances that neglect the body as meaningless, transitory, or unimportant.

In a sense, it is quite understandable why people have developed such negative views. The human body can seem like cumbersome baggage that suffers from numerous problems and ailments: pain, aging, disease, and other unpleasant stuff affect it every day. We can imagine that there would be no more complications from carnal lust or primeval urges if we simply existed as some kind of pure soul.

The Buddha himself tried extreme asceticism in the beginning of his search for the truth of existence. Later, he concluded that such practices are ultimately futile, and instead taught the Middle Way—a lifestyle free from the excesses of both sensual indulgence and asceticism. This is the path that monks and nuns are supposed to follow.

Nowadays, at least, it feels like we don’t have to worry about going around teaching Buddhists not to practice asceticism—that doesn’t seem to be a problem anymore! On the other hand, there are still religious practices that involve beating one’s body, extreme fasting, and all kinds of unhealthy forms of abstinence that are a means of self-inflicted denial or punishment.

The modern secular world is no more enlightened when it comes to the body, which it treats as an object that can be used for fulfilling all manner of desires. We study the body as some kind of mechanical object, the way an engineer studies a machine. When our car breaks down, we take it to a mechanic’s shop, where he or she will study it, component by component, to try to find what went wrong.

If the mechanic is very good at understanding the whole system that makes up an automobile, they will know how it’s supposed to run and what can go wrong. They might have a huge vocabulary describing the systems and parts of a car. Many of us, even after driving for decades, might know the names of few, if any, of the components that comprise our vehicle. Once the hood is open, there’s a lot going on that is hidden from our view or understanding.

In a similar way, when we get sick we will often visit a doctor, many of whom tend to treat the body as a soulless machine that can simply be observed in parts to determine what went wrong, and then attempt to fix the problem. As a result, people find hospitals to be some of most sterile and colorless of environments, a reflection of our soulless attitude toward the body as a machine. Instead, hospitals should be uplifting and welcoming, to give patients a feeling of comfort and safety. Pleasant feelings of solace and enchantment can enhance and expedite the healing process.

Why don’t governments, individuals, or hospitals themselves provide the means to bring aesthetic beauty to our modern hospitals? As medical science progresses, we’re increasingly able to replace many non-functioning parts of the body with artificial substitutes. Such practices can even encourage the notion that body is nothing more than a machine whose real purpose is to continue functioning ceaselessly. 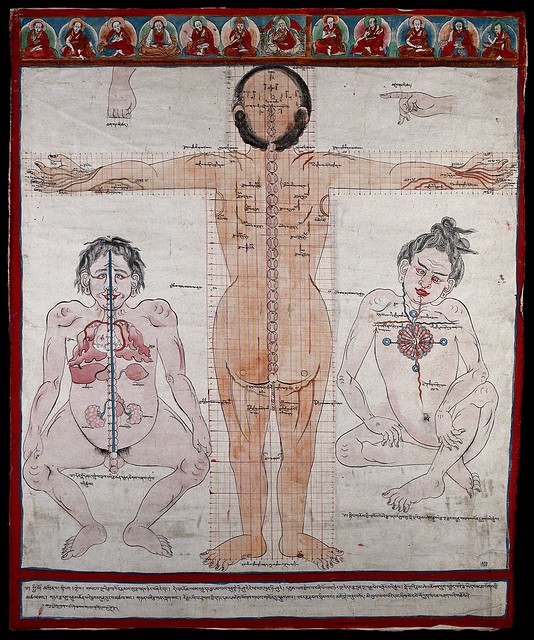 Many wise people from the past understood this misconception and came up with more enlightened and informed outlooks toward the human body. Tantric Buddhists observe samaya (Tib. དམ་ཚིག)—commitments or vows that include not abusing one’s own body, which is considered one of the 14 root downfalls. They also hold the attitude of understanding that the body is a mandala, a holy temple, and naturally sacred. When they eat, they often consecrate the food as a ganachakra or sacred feast. Eating itself becomes a ceremony of offering the feast to one’s body as the divine abode. This practice is described in a verse from one of Patrul Rinpoche’s (1808–1887) dohas:

When the great meditators consume,
Bless the food and drinks as a ganachakra,
One’s body is an assembly of peaceful and wrathful deities.
Consume while not being distracted away from the nature of mind.

People also often use the body as a pleasure center. Not only do we enjoy the myriad pleasant sensations that arise in the body through our brain and nervous system, but we often use these sensual experiences as distractions to numb our own psychological pain, ranging from loneliness to anxiety. Likewise, food is increasingly used in the manner of an opioid rather than a sacred feast that sustains the body with an offering of pleasure and nourishment. This habit is driving many people toward food addiction, which in turn can cause enormous problems including obesity and other physical and mental health issues. Science has yet to fully address the psychological and physiological factors behind such problems, beyond identifying bare facts such as the leptin and sugar connection.

It’s time for us to bring the tantric view to the fore and to develop a sacred attitude toward the human body. This will help us overcome any unnecessary guilt and shame we may feel toward our bodies, regardless of how much they may be judged by society. One challenge we’re facing is how to introduce this concept in a world where the very concept of sacred is either rejected or has become twisted and distorted. If we don’t start with an understanding of the sacredness of the body, then embracing the world or anything sacred won’t come easily.

Going to “the Place that Nobody Wants to Go:” Pema Chödrön and Moana
Siri Kirin Kaur – Nourishing Home and Family with Yogic Practice
Conventional Body View