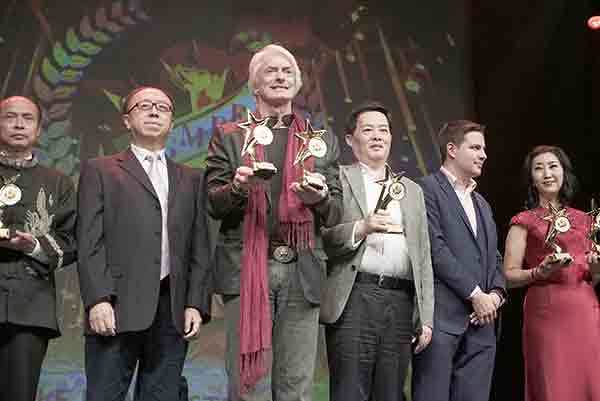 Searching for the Lotus-Born Master wins awards at the Canada Golden Maple Film Festival.
From chinaplus.cri.cn

The Buddhist documentary Searching for the Lotus-Born Master won two awards at the Canada Golden Maple Film Festival in Vancouver last year: Best Documentary Film Director and Best Documentary Photography. Directed by Laurence Brahm, the film focuses on an eighth century figure who is considered by many to be the father of Vajrayana Buddhism. As we are told from the outset, the Lotus-Born Master goes by many names: Guru Padmasambhava in Sanskrit, Guru Rinpoche in Tibetan, and Lian Hua Sheng Da Shi in Chinese. This is indicative of his influence across the Himalayas, where he is said to have taken on eight different manifestations in order to transform negative energies and spread the Tibetan Buddhist teachings.

As an introduction to the film, Brahm describes the persistent calling that led him on his expedition: “[The Lotus-Born Master] came to me in dreams. He kept appearing every night. I was not sure why until I heard his voice saying my eight manifestations represent eight quantum energy fields. Now go tell the world.” Having already led an expedition to the Himalayan region for his previous documentary Searching for Shangri-La, the director and his team subsequently covered 20,000 kilometers in a period of six months to answer the question: “Was the founder of Tibetan Buddhism also the father of quantum physics?” Brahm’s theory is that the eight manifestations of the Lotus-Born Master may be a coded language revealing the laws of quantum physics. 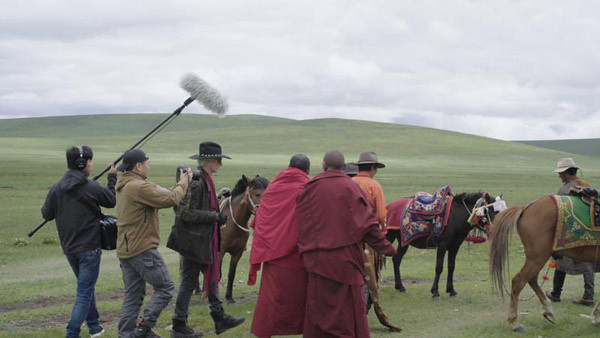 Searching for the Lotus-Born Master. From chinadaily.com

In order to investigate this, Brahms and his team visit five countries, taking the viewer to important milestones in the Lotus-Born Master’s journeys across the Himalayas. We start off in Boudhanath (Kathmandu) where the 11th Choeze Kuchen Rinpoche—the direct descendant of Terton Geru Chogyal Dorji, a treasure discoverer prophesized by the Lotus-Born Master—tells us “before entering into Guru Rinpoche’s world, first we must know where to start, like a door. So the Boudha Stupa it is like the door to enter into Guru Rinpoche’s world.”

Footage of prayer wheels and worshipping follow, as the film crew and the lama explore the famous structure. From there, we are shown the beautiful landscapes of Oddyanain Pakistan’s Swat Valley. Legend has it that the Lotus-Born Master was born in that region and first manifested on a lotus on lake Dhanakosha, hence his name. Other footage includes a glimpse of the Azura Cave in Pharping, Nepal, where the Lotus-Born Master is said to have meditated. Some people also attribute a handprint to him. Then on to Bodh Gaya, India, where the Lotus-Born Master defeated black magic through the power of debate; and the harsh climate and rocky terrain of the Terdrom Valley in Metrogonka, Tibet, where the Lotus-Born Master hid a number of spiritual treasures (termas) so that his teachings could be accessed by future generations.

The cinematography is beautiful, and as we trace the footsteps of Guru Rinpoche, it becomes increasingly clear that he has had a far-reaching impact over the Himalayan region and its cultures.

In addition to the vast locations covered, the film features interviews from a wide range of experts. As Brahms explains, his team “sought the wisdom of great lamas, the research of dedicated scholars, and the science of technology innovators.” With their help, the filmmaker asserts that the expedition “proved the legend to be true.”

Having just highlighted the legacy of the Lotus-Born Master and his association with magic, myth, and, in particular, science, my expectation was therefore that the film would provide significant evidence about the relationship between the Lotus-Born Master and the origin of quantum physics. And this is where, in my opinion, the documentary disappoints. While there is indeed a lot to be learned from the interviewees, their discussions are cut into very short segments, which prevents their theories from being discussed in any depth. Certainly, a number of the interviewees attest that the Lotus-Born Master is—or may be—the father of quantum mechanics (from Nepalese Lama Tulku Padang Rinpoche, to researchers Danah Zohar and Sumnima Udas). However, the film glosses over opportunities to fully investigate the filmmaker’s question “was the founder of Tibetan Buddhism also the father of quantum physics?” 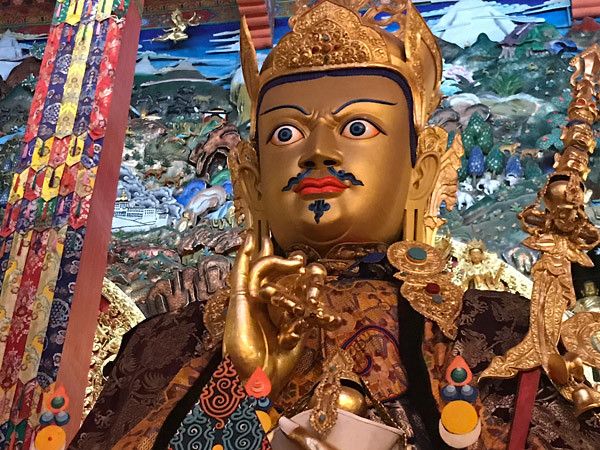 Searching for the Lotus-Born Master. From chinadaily.com

To illustrate this, I will refer to the film’s exploration of one of the Lotus-Born Master’s manifestations, Guru Pema Gyalpo (the king of Oddyana or Shambhala).

According to the documentary, Vajrayana is widely practiced in the region of Oddyana—and records from the Tang dynasty (618–907) describe the people of Oddyana chanting mantras to express the energy of the Lotus-Born Master. A number of scientists and Buddhists are then interviewed on the subject of mantras, and attest to the powerful energy of sounds and vibrations.

This is a fascinating topic, but when we are shown footage of a healing session at a healing center in Boudhanath, we are given no information as to what exactly is happening, what the aim of the session is, nor what science or theology underpins the healing, which I can only assume is effective. It is also unclear how the scene relates to the Lotus-Born Master in his manifestation as Guru Pema Gyalpo. Instead, the footage is juxtaposed with short segments from different talking heads. As a result, the experts’ theories are too brief for the viewer to make any meaningful sense of them.

Unfortunately, this is a common occurrence in the film and it only serves to dilute both the knowledge of the interviewees as well as the significance of the cinematography. For this reason, the film falls short of what it set out to discover. As a viewer, if you are looking for a meaningful investigation into how the Lotus-Born Master’s manifestations relate to quantum physics, you are in for disappointment. However, if you wish to immerse yourself in the beauty of the Himalayan region and learn about the history of the Lotus-Born Master, the documentary is still well worth a watch.

12th Buddhist Film Festival Europe to be held in Amsterdam, 29 September–1 October
Film Premiere: Powerful New Documentary Follows the Life of a Buddhist Priest Dealing with Suicide
New Film Charts the Life of Akong Tulku Rinpoche, Co-founder of Western Europe’s First Tibetan Monastery​
Buddhist Documentary Becoming Who I Was Picked Up for US Distribution after World Premier in Berlin​