Oh, music! It effaces all that is fortuitous, evil, coarse, and sad in you; it brings the world into harmony with you, it makes burdens light and gives wings to depressed spirits. — Hermann Hesse

Hans Schumacher is a longtime meditator and a multifaceted musician, singer, and songwriter. When he was young his parents bought a piano. At the time, there was a lot of upheaval in the family and, at times, Hans would sit in the dark and play the piano for hours. He was only in 1st or 2nd grade, but that improvisational piano space was a kind of refuge for him and started his music immersion. Hans recalls that he wasn’t always so good at practicing the pieces and exercises his piano teacher gave him, so when his weekly lesson rolled around, he couldn’t necessarily play the Bach he was supposed to be learning; instead he had been improvising his own songs!

Years later, Hans is now adept at guitar (both electric and acoustic), bass guitar, flute, bagpipes, and piano. He also plays some horns and harmonica. His affinity for the bagpipes started early because he loved the drone aspect (a harmonic or monophonic effect where a note or chord is continuously sounded throughout most or all of a music piece) and the overall sound. Later, he came to appreciate the flute as a kind of instrumental wind cousin to the pipes. While living in Japan, Hans studied the bansuri, later continuing his studies in India. He finds the drone in Indian ragas to be reminiscent of those in Celtic music. The ragas have a tonic and a fifth, against which a single melody line plays. This counterpoint has a hypnotic and meditative quality. The flute, being softer than the bagpipes, creates a unique effect, due to the constancy of the drone working with the tension and resolution of the melody line. All resolves back into the foundational drone, or tonic note of the scale. By contrast, the bagpipes are powerful, loud, and imposing. Traditionally, they are supposed to be played outdoors, in the open air. Once, while in Halifax with his wife, Hans heard a piper playing on the pier. This encounter was the impulse for Hans to take up the bagpipes. He met a bagpipe maker in Nova Scotia, and bought an expensive set of pipes on a whim. It took him quite a while to learn how to play, but he was motivated by the idea that he could play for his brother’s 40th birthday. He found a teacher, practiced, and then surprised his brother on the morning of his birthday by playing on his front lawn, kilt and all. Since he had gone through all that trouble, and had a good connection with his teacher, Hans decided to continue studying the pipes. According to him, the pipes have a special energy that appeals to people, and he loves sharing that. 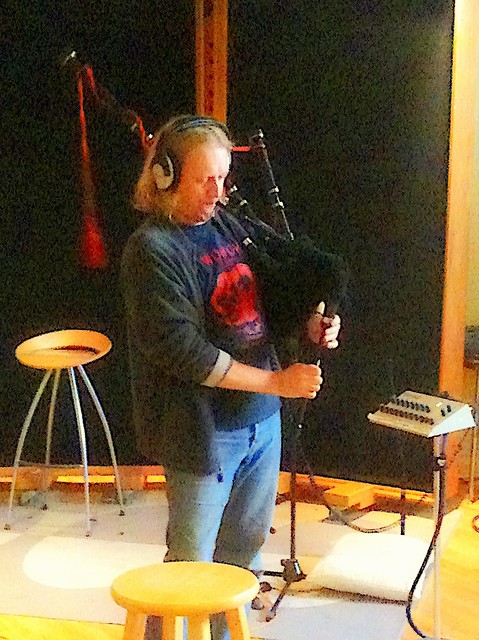 Hans met his first meditation teacher, Ajahn Buddhadasa, during a 10-day silent retreat in southern Thailand. This encounter opened an important door for him. Later, he met Tibetan meditation master Chagdud Tulku Rinpoche, and eventually became a Nyingma practitioner. At the time, he was living in Japan, where he met his flute teacher Hiroshi Nakagawa, an amazing bansuri player, at a concert in Osaka. Hans felt his mind shift as he listened to the performance, and after the concert he approached Hiroshi, who immediately encouraged him to learn how to play. Hans recalls: “There was something about him, and [there was a] power in the flute music that I couldn't explain. He was so loving toward me. I practiced for an hour every day without fail although he had told me [to practice for] two [hours]; he said, don’t even scratch your face or be distracted [when you practice]. I did that for a year, then went to Bombay to study with one of his teachers intensively. I met many well-known Indian musicians: Ravi Shankar, and others such as Malhar Kulkarni, who [later] became my main flute teacher. Malhar-ji’s son Rupak Kulkarni is now a world-famous bansuri player.” *

Hans studied the Hindustani classical music tradition, and traveled the world with his acoustic guitar. He busked on the streets of Europe, and played with rock bands in Taipei, while working for a Taiwanese record company that was a subsidiary of Rough Trade Records in London. He recalls that Taiwan had lifted martial law just a few years prior to his arrival, so there was a freshness to the spectacle of Westerners playing music in Asia. 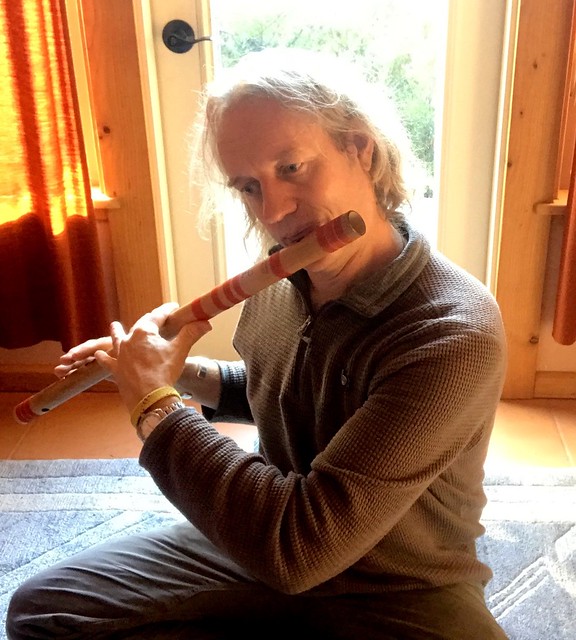 Hans mentions that some of his biggest openings into awareness have come directly from the intimacy of playing guitar and singing songs by himself. This is his “heart opening” meditation. The songs can reveal enigmatic meanings, cracking him open to lost memories and to letting go. He records songs to a voice memo app on his phone, singing nonsensical melodies while playing guitar. Once, while listening to one of these song sketches on his phone, he heard his own voice and started questioning who was actually singing the song? Hans realized that it was “awareness” that was singing back to him! It seems the line between the musician and the source of music becomes blurry at times. Similarly, he sees his auto-writing exercises as an inquiry into who the me is, and who the voice is. Layers of self fall away to uncover yet deeper layers. This process relates to the practice of giving voices to disowned parts of ourselves, but it is perhaps more potent. Listening to himself sing is very intimate and direct, bypassing the head, and going straight to the heart.**

Hans wrote a handful of songs during his last retreat, which will appear on his next record. His band, American Pleasure Dome (APD), is about to release its first album of original tunes, mostly indie rock, that include a meditative aspect. He is currently focused on playing more acoustic shows and is invited to perform in venues around his home town of Minneapolis. Many of the songs he writes for APD start with him playing, singing, and improvising on his couch at home. He then brings these acoustic sketches to the band, and they rehearse and record them as full band rock versions. Hans is now working on streamlining some songs in more intimate singer-songwriter style arrangements, bringing them back to their original acoustic bones. One of his teachers, Tsoknyi Rinpoche, talks about music being a powerful way to address suppressed emotional trauma, by helping to heal the subtle (energy) body. Healing has been a big part of playing music for Hans, even if healing was not what consciously drew him to music. In contrast to formal meditation, music can plumb the depths of the inner landscape, with sound becoming the nonverbal language of emotions. At a pivotal moment, another teacher asked Hans to investigate what he felt was spiritual and nonspiritual about his relationship with music. Noticing a slight disconnect between his musical and spiritual practices, Hans wasn’t seeing the shamanic, alchemical process present in musical exploration. He saw meditation as separate from playing guitar. But the process of giving rise to sound, of diving in to the music, can be an awareness practice too. For modern-day yogis, exploring creative expression can be a doorway into—and/or present itself as pure awareness. Hans says that when he plays guitar, and is communing with himself nonverbally, his subtle body comes online, and sometimes others can resonate with that—accessing the same field in themselves. This is akin to the group energy field at a concert, which for some people can feel like going to church or temple. It is initially created by the musicians, but becomes a shared experience with the audience. Similarly, in a group retreat environment, where everyone is meditating and people are playing the flute and the tanpura, practitioners can enter into the field of unified consciousness together. The listeners are participating more than they realize—they are both sending and receiving, and are resonating with their inner creative process in this heightened state.

In terms of composing, Hans feels a comfort in using a traditional structure as a starting point. With the rational mind thus occupied, something more authentic can surface and he can hone in to see what may develop. Something as familiar as a chord progression can be the launching pad into a new territory. This outer routine or structure allows something to come forth, rather than making something happen. It is the connectivity of body, mind, and heart in the unknown sphere of sound. When Hans sits down to write a song, he connects to awareness by having no time limit and no goal—just by starting to play something. It's somewhat like a surfer trying to catch a wave; he feels a correlation with the meditator’s perspective—by being totally present and open without expectations, a song can come forth, seemingly more effortless than intentional. It’s crucial not to judge what comes through, although it seems awkward at times. Even if the first efforts feel contrived, he perseveres, he gives them attention and sticks with the process, not knowing what will eventually emerge. Any given session might not seem all that interesting, but then just before he puts guitar away, something arises from a little window of openness. In this case his identity, ego, or personality typically aren’t involved but have fallen away. Rather than intentionally “authoring” a budding piece, there is space for something more authentic to show up. For Hans, the process of sitting and seeking this experience, and going through these contrivances, even subtle ones, draws a distinct parallel between the processes of meditation and accessing music. By playing his own music long enough, there is more objectivity, more space. The songs become less about himself, and more universal. The same might be said of meditation practice.

If artists recognize the source of conceptions, when they express them, the connection between the conception and its source will be unbroken and therefore pure, fresh, and light. — Thinley Norbu

Hans recalls Rolling Stones guitarist Keith Richards talking about being like an antenna, like being on a shamanistic journey. Starting from wanting to understand one’s own mind, one connects with the universal, beyond ego and rationality. There is the possibility to express what comes through, to be a channel or medium for the source of music. Often, composers can’t discern the origin of their music. Once recorded and replayed later, music is not the same as it was in the moment it was played or sung. Due to the unifying effect of both playing and listening to live music, the sound, especially that of a wind or stringed instrument, starts to resonate with body and mind—a somatic harmonizing of imbalances, both literally and psycho-spiritually. This is the gift, the joy, the magic, and beauty of music. For Hans, playing the flute in the unfolding moments of spontaneity is unique each time. In the open, relaxed, and present expanse, it’s source is a mystery. When he is in the flow, nothing is planned, it just transpires. When a musician has trained enough, the music plays itself. Who’s playing? What’s happening? Awareness is playing: space is sounding!