Sangha children take a break from playing tag. Image courtesy of the author

The beginning of the holiday season and the end of the school year means there are kids at home all day. It means dealing with moments of boredom and mayhem, and having friends over to play. Recently, the sangha children were playing water tag around the house, running happy and wild in the sun, and there was a special feeling of camaraderie between them. There had been no teasing or conflict all afternoon, just a steady stream of snacks and fun.

It happened to be the 25th day of the lunar calendar and I was hoping to attend the special evening ceremony that would be held in the temple, but I also knew that it would be difficult to keep the children occupied in the shrine room. Reflecting on how well the day had gone, I thought to myself, “Wouldn’t it be great if they could do a little session meditation together.” Mostly out of laziness, I concluded that it would be hard for them to settle down and sit, but a little later the idea came back to me. I mentioned to the other parents that I was thinking of organizing an impromptu meditation session with the children and they were pleased with the idea, so after the last round of snacks I asked the children to find an object in the garden that they could use to focus on during the meditation. One of the boys picked a rock, while the girls went running ahead to pick flowers. When I looked down the path from the garden in the direction of the temple, I saw one of my daughters dragging a tree branch that was fully half her size. I was relieved when another parent intervened and told her that it was too large to bring into the shrine room.

I gathered the children together in an alcove of statues at the back of the temple, and after talking briefly about the qualities of enlightened body, speech, and mind, we recited the refuge prayer together: “I take refuge in the Buddha, I take refuge in the Dharma, I take refuge in Sangha.” We quietly made a wish that our meditation would benefit not only ourselves but all other sentient beings too, and then sat with our backs straight, focusing on our individual meditation objects and breathing naturally. After a few minutes of sitting I rang a bell once to conclude the meditation. To my surprise the children asked to repeat the session and we ended up meditating three times before dedicating the merit of our efforts. Although the ceremony was already underway in the main part of the shrine room, the children asked in hushed and excited voices about the life of the historical Buddha and about meditation. 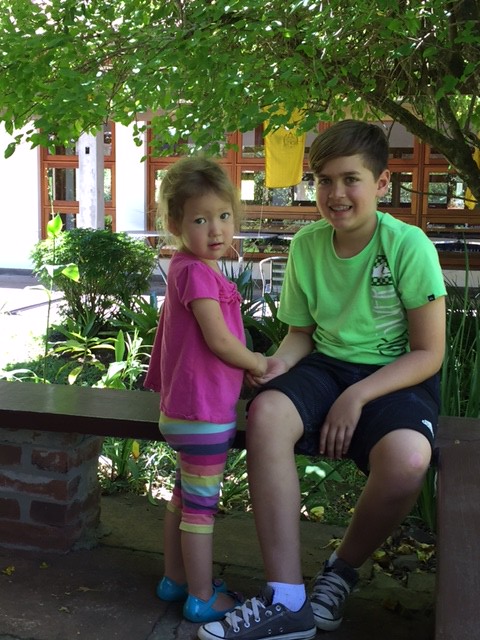 Leela and her sangha friend Erik. Image courtesy of the author

Sometimes I think that we parents hold back from meditating with our children because we worry that they will develop resistance. We sometimes feel it is better not to push them, but to let them find it on their own, however I am starting to realize that this is a mistake. In general, I have noticed that children really enjoy meditating if they are allowed to become accustomed to it in short sessions. My New Year’s resolution is to meditate more with my children and the other sangha kids, and not to allow the opportunity to share this with them while they are still little slip by. Even as adults, a few minutes sitting quietly can be so helpful, and doing this together as a family creates a unique bond.

This time last year there were more children playing around the temple while their parents attended teachings and meditation sessions inside. I had started sitting with the children in our apartment from time to time, and I remember one day as I recited the refuge prayer, Amaya proclaimed loudly: “I take refuge in the fart!” All of the children fell over laughing. I laughed too, observing that I would be careful about taking refuge in a fart; it might not be very nice. I thought to myself, “Oh dear, Amaya has no respect.” Sometimes she would lie down during the session or misbehave. If I was using an image or an object to focus on, she might move it around. I did not reprimand her on those occasions, but simply kept going with the other children. Now Amaya is in a new phase and is sitting nicely. I find that change in her encouraging.

I am also encouraged by how the children form a supportive peer group if correctly stimulated. My three-year-old went and plopped herself in the lap of one of the older children during our last session. Instead of losing his focus, the older boy put an arm around her and continued to concentrate on the rock on the mat in front of him. It was such a sweet moment that I had a hard time not being distracted myself as both the older boy and my three-year-old sat quietly. All of these children and all the children of the world are so precious. I know it sounds like a cliché, but they are the future of this world. I wish to remind myself, and other parents out there, not to hesitate to share the powerful and blessed tools that we have in the Buddha’s teachings with our future generations, starting at home. 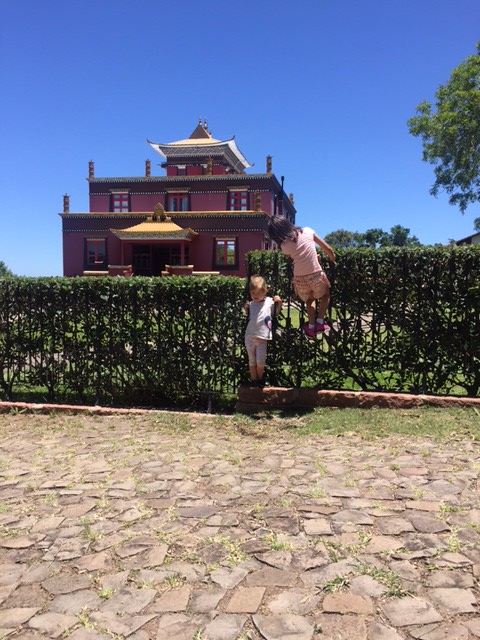 Amaya and Leela in front of the Khadro Ling temple during the first week of
Amaya's school holidays. Image courtesy of the author

The teaching that has been coming back to me as we approach the end of this year and the beginning of the next during this time of so much uncertainty and strife is: “Do no non-virtue whatsoever, practice virtue thoroughly. Completely tame your own mind.” These few words are said to summarize all of the Buddha’s teachings. I truly hope that these words can be heard and practiced more and more for generations to come.