The conceit “I am” (Pali: asmi-māna), is said to be one of the final fetters one overcomes on the Buddhist path. Practitioners in the West often work to de-center their sense of self: breaking it down into the five aggregates, seeing all concepts as impermanent or ultimately empty. However, few teachers actively encourage the critical examination of concepts such as whiteness or the male and cis-gendered dominance in our current world.

Lama Rod Owens brings us to the heart of these very issues in his teachings. He drops his own “I am” mask—opening a place of vulnerability for others to potentially likewise step forward free of conceits—and speaks from his life and experiences as a black, queer man; in his words a “colonized person.” In doing so, he holds a mirror for the rest of us to see our own complex identities.

Owens holds a Master of Divinity from Harvard and is an authorized teacher in the Kagyu lineage of Tibetan Buddhism, although he does not identify as a Tibetan Buddhist, as we shall see. Today he is an activist, organizer, and poet, recognized as one of the emerging leaders of the next generation of Dharma teachers.

This month I’ve interviewed Lama Rod Owns to explore his experiences of vulnerability, identity, and Buddhism in America.

Buddhistdoor Global: One of the first things one notices in your teaching is the focus on “unmasking,” on seeing the vulnerabilities and difficulties that we tend to hide from. Was there any particular “unmasking” moment in your life that you can recall turning you toward or firmly onto the path of Buddhism?

Lama Rod Owens: I think there have been a few really major unmaskings for me. One in particular was my struggle with mental illness, which for me was in the form of depression. For the first time in my life I had this incredible opportunity to develop an awareness of my mind and to also develop an intimacy with the mental sensations and energies that I habitually avoided. Touching into this uncomfortable energy and practicing holding steady interrupts ego fixation and transforms pain and discomfort into a kind of mirror allowing you to see yourself. In this sense, the pain becomes the guru. Overall, this is the process of unmasking and it entails transforming the things we avoid into our teachers. Working with my depression in this way led me directly on to the path of the Dharma.

BDG: How do you find people respond to your openness and vulnerability as a teacher?

LRO: People are either startled and turned off, or feel refreshed that there is someone who is transmitting their realness and in doing so helping them to connect to an actual example of someone struggling with the Dharma just like them. So many people expect the Dharma to be transmitted in particular ways and they are not interested in deviation. Overall people love the vulnerability.

BDG: For some, this kind of openness and vulnerability can be upsetting, or at least cause discomfort. Many teachers don’t project this kind of vulnerability; they project a very holy demeanor and focus on historical concepts and formulas. Is this a new-versus-old-school of teaching? Is one more useful or suited for the West, or do both have a place?

LRO: Both have a place. It is not either/or. We have to learn to have a blended kind of pedagogy. Basic scholarship is absolutely necessary but we can get really comfortable hiding out behind the scholarship. What I’m interested in is how teachers wrestle with making this scholarship real and turning it to practice. Students don’t know how to do that necessarily. Dharma teachers should show up and give the facts and then show students how to metabolize and wrestle with earning the Dharma. Earning Dharma happens when we struggle with practice and it slowly begins to reveal wisdom or clarity, which impacts how we move through the world in less violent ways.

BDG: For a while you’ve been very open about discussing your experiences with teacher misconduct. Do you feel like this is just a blip in the history of Buddhism in the West or perhaps a watershed moment?

LRO: I doubt it’s a watershed moment. Neither is it a watershed moment in other secular spaces. Real change comes when members of the dominating group where a majority of the violence originates begin to divest from the identity that is conflated with dominance. This needs to happen on a large scale. That is not happening in other spaces nor is it happening in Buddhist spaces. Male-identified teachers and practitioners are not speaking out and doing the work of divesting. We are not calling out abuse nor are we seeking support as we struggle through ethical misconduct issues. 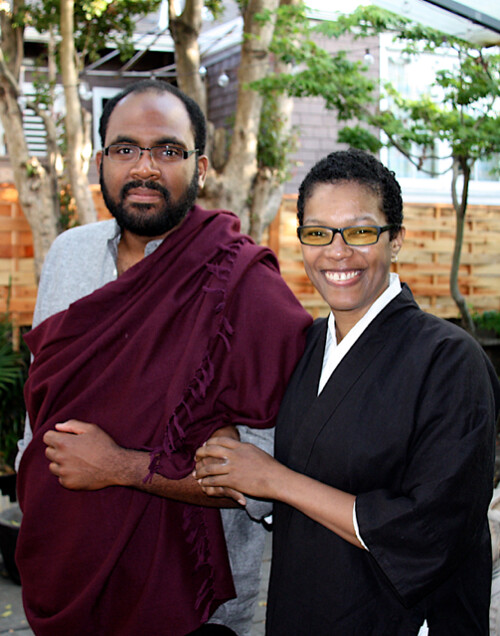 BDG: How deep do you think patriarchy has its roots in Western Buddhism? Can good Dharmic arguments be made for demanding equality across genders, races, and other categories of privilege? Or is this coming down to an Asian-conservative-versus-Western-liberal divide?

LRO: Sometimes I think I’m really dense. I keep assuming that Buddhism is about the alleviation of suffering not the perpetuation of suffering. Inequality breeds suffering and we are too smart to believe that there is a fundamental difference in how differently gendered and nongendered people have access to enlightenment. Whatever obstacles arise are all because of ignorance within the relative.

BDG: You once wrote that you no longer identify as a “Tibetan” Buddhist teacher, saying, “Tibetanism as a cultural influence has been a source of struggle for me. I am currently identifying as a Tantric Buddhist practitioner and lama.” Can you say more about that? It seems like it would be difficult to drop that Tibetan designation completely.

LRO: Actually, it’s quite easy when my main identity influences are blackness and queerness. So many of these views are expressed out of whiteness, which historically is situated as an identity that colonizes, assimilates, and appropriates. I am a colonized person and come from a culture that has been colonized and appropriated by white people. I have also been colonized by Tibetans and their religion. I am super sensitive around being forced to accept and prioritize other cultures over my own. There is so much Tibetan culturalism in Tibetan Buddhism. When I would learn certain etiquette, and would ask others why we had to do certain things, the answer was often, “because that’s just how it’s done.”

That’s not OK for me.

That’s how colonization works. As a colonized person, your etiquette is replaced with etiquette from the dominant culture and you are not offered logical explanations. Because of my experience as being colonized, it was easy for me to say “nope” and because of my curiosity, I can look deeper into the roots of these practices and return to a way of being a lama where I can privilege the essence of practice and ritual and use that essence to make meaning that is beneficial for me. When it makes sense to me I can deeply embrace it. I am not Tibetan. I am a black, queer American, among many things. I want to create practices that hold the essence of tantra while at the same time speaking to my cultural roots.

BDG: What do you think about the growth in secularized meditation practices? Is this a possible inroad for Buddhism in the West? Or does it look more like a watering down and co-optation by capitalistic forces?

LRO: I think that secular mindfulness is certainly getting involved with capitalism but at the same time it is getting into spaces that Buddhism can’t go. I see it as more positive than negative. I got involved in the field because I find mindfulness to be a skillful way to communicate the wisdom of the Dharma in a non-dogmatic way. I find it to be really useful and beneficial for a wider range of people. I do see part of the field being dominated by people with very little practice but who are also making a lot of money. I am interested in long-term practitioners being able to teach and instruct, not just those who complete an eight-week course. At this moment in history, secular mindfulness is helping even though we may not like how it is infiltrating spaces. Yet another issue that we have to be aware of is how mindfulness is transmitting whiteness. This is the edge that some of us are trying to bring attention to.

BDG: In your recent webinar with Lama Justin von Bujdoss, you talked about keeping a foot outside of Buddhism, so to speak. What are some key influences in your life that maybe trickle into your Dharma teaching?

LRO: I was raised in the black church, and that is a huge influence in my Dharma teaching. In the black church and black culture, authenticity is important. One of the ways that authenticity is practiced is through speech. Black folks use speech to create community, to establish a sense of belonging. Black people descend from African peoples, whose culture was centered around oral communication. Black people, especially in America, retain that practice. I retain that in my teaching. Some may say I practice idle or discursive speech, yet for me it is a speech that is appropriate to how I was raised to relate to my community. My speech is playful, colorful, irreverent. For me, this speech is inviting, nurturing. It is certainly not cold or distant.

The playful quality of speech heard through my culture, from the pulpit to the street corner, is what informs my Dharma teaching. Other influences include my love of trauma theory, social critique, and race theory. These share my Dharma teaching in a way where I can depend on awareness of how not to teach in a way that excludes but invites in. BDG: Your book, Radical Dharma: Talking Race, Love, and Liberation (North Atlantic Books 2016), co-written with Rev. angel Kyodo williams and Jasmine Syedullah, Ph.D., has been described as a difficult book for white folks, and as like a Zen koan; a deep question that leads to truths. How does the book, its questions and its truths, sit with you today? What would you most want people who have not read it to know?

LRO: Well, white people struggle with it because it’s not written for white people. It does not center on whiteness. White people, because of the dominance of whiteness, expect everything to relate to them, to center on their experiences. The book does center on blackness and queerness, which is the same as saying that the book is about challenging hegemonies and blurring boundaries. This is exciting and also uncomfortable. The book does not apologize for any of this. There is a simple straightforward truth being offered and it does not need the validation of the white gaze.

BDG: And lastly, where next? What are your plans for the future?

LRO: I am spending the next year teaching all over the country and will be doing a teaching tour of Europe and the UK. I’m also starting my next book project on anger and love. Also, Lama Justin Von Bujdoss and I hope to announce a joint venture together.