Donald Trump signs an executive order on 20 January 2017. From independent.co.uk

The Trump era is here. The past few weeks have seen the most controversial man to ever sit in the White House send the world careening into a flurry of heated exchanges between heads of state, with protests and mass movements spreading across the US, and a frenzied recalibration of alliances and power factions spelling turbulent times ahead for the world. Over the next four years, there will appear opportunities for social and economic transformation (Trump has pulled the US out of the Trans-Pacific Partnership) as well as potential for great harm done to Americans and non-Americans alike. Given Trump’s volatile personality, it is difficult to say whether his presidency will be for better or for worse, although it is understandable why so many think it will be for the latter.

American Buddhists occupy a broad political spectrum. While the editors of Buddhist magazines (who are typically middle class Caucasian converts to Buddhism) generally lean left, there are large numbers of conservative registered Republican Buddhists, many of them of Asian descent. However, the ethnicity of Buddhist voters played a negligible role in the 2016 presidential election, at least according to a small pool of surveyed Asian and white respondents who mostly responded positively to democratic socialist Bernie Sanders.

Based on the tentative conclusion that many Buddhists voted Democrat (whether for Sanders or Hillary Clinton), it is likely that they see the implementation of Trump’s policies and the general political climate of his presidency as profoundly harmful. We agree with the observations of many others that Trump’s excessive narcissism, pettiness, and angry and disingenuous rhetoric—and the dubious agendas of many in his inner circle—are leading to what comedian Jon Stewart called a “purposeful, vindictive chaos” already engulfing America and could do great damage to other countries.

It is also quite likely that the American Buddhist community (like many others) is divided about Trump. Buddhist journalist Ken McLeod observed this when he wrote in an article how to “be present with difficult feelings without trying to change or control what we experience, and how that can open up the possibility of finding peace and clarity in the midst of our reactivity and confusion.” Some of his readers were dissatisfied with what they perceived as a missing call to action. He responded with an article challenging the premise of engaged Buddhism—a challenge that engaged Buddhists should not shy away from. (Tricycle)

Engaged Buddhism, McLeod argues, is a well-intentioned movement that asks the wrong questions and gives the wrong answers. He proposes—and historically, he is on solid ground—that Buddhism has never been about making samsara a better place, at least in the modern sense of “social justice.” Buddhism is an essentially “mystic” tradition that has always been about liberating beings from this world, and that the responsibility of a Buddhist is to step out of the ego’s reactivity to the world’s ebb and flow. Engaged Buddhism, he posits, is in danger of negating the legacies of past masters who had no intention of “changing” society, such as the Tibetan yogi Milarepa or the great master Khyungpo Naljor (fl. c. 10th–12th century). McLeod emphasizes how much more difficult it is to let go of the “I” function in life and devote oneself to attaining freedom from the tyranny of reactions associated with the sense of self, than to “get out there” in the name of social justice. From an orthodox Buddhist perspective, this is quite true. He therefore warns that engaged Buddhism risks reactivity and confusion, which are the opposite results sought on the path to practice.

McLeod alludes to several images: a surfer can only ride out a breaking wave (referring to Trump) as best as they can, while an artist or creative person loses her sense of self while making art but should not be characterized as selfish for ignoring other matters in pursuit of perfecting her craft (he argues that this is applicable to Buddhist practice as well). Finally, he invokes the Daoist sage Zhuang Zi (fl. C. 4th century BCE), who talked about a gnarled tree under which people could seek shelter, but in the end just stands there, as trees do.

However, there do appear to be problems with some of the analogies. Take the one of the creative person. Art can be (some would even argue should be) political. The artist could well be engrossed in a piece of political art, and while she might rightly not sap her energies going out to protest or march, why should her art not address war, poverty, or hunger? In the Mahayana universe, the surfer is not even the right image to use; rather it is a ship riding the rough waves of samsara that picks up floundering and stranded beings in the sea, saving and delivering them.

Finally, the 8th century Indian monk and scholar Shantideva in his Way of the Bodhisattva also alluded to a tree under which exhausted beings could rest (3.29), but unlike Zhuang Zi’s crooked tree, Shantideva’s tree represents bodhicitta, which is the motivating force of a bodhisattva who has perfected wisdom and compassion. The words compassion and bodhisattva do not appear in McLeod’s piece.

There is also no discussion about the possibility that one could be both detached and involved in the world, à la that legendary lay Buddhist Vimalakirti. Nor is there discussion about Thich Nhat Hanh, a pioneer of the engaged Buddhist movement, who opposed the Vietnam War and is a staunch advocate of policy to mitigate climate change (which Trump likely disagrees with). At the same time, Thich Nhat Hanh himself, in numerous publications and sermons, has warned against “activist anger,” which manifests in burnout, a lack of compassion for oneself, and even hatred for those seen as oppressors or wrongdoers, leading to the greatest anathema in Buddhism: duality and the language of dualism. 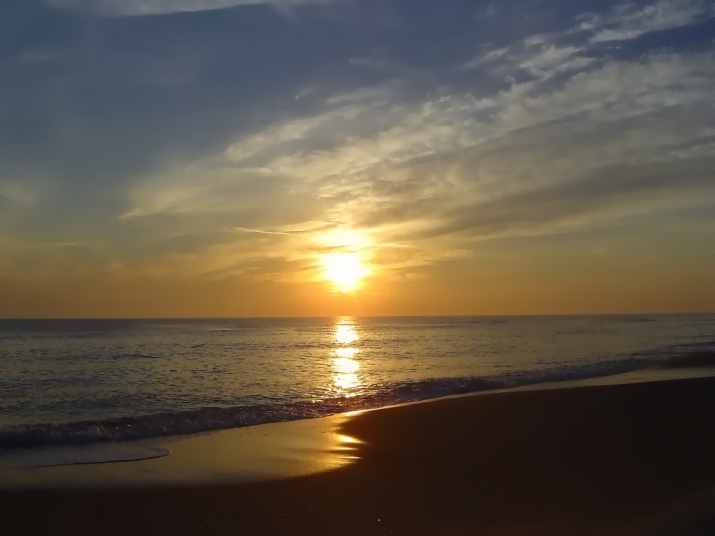 Shantideva likened bodhicitta to a radiant sun dispersing the darkness of the unawakened. Image courtesy of Ricard Villela

Engaged Buddhism has much to offer the world, but at the same time it needs to focus on asking the right questions concerning liberation and insight. While engaged Buddhists should apply their energies to benefiting beings during the Trump administration, engaged Buddhists should also be mindful of Trump’s own humanity and vulnerability, and his inherent spiritual worth as a sentient being and a Buddha-to-be. Also to be considered are the enlightened natures of Steve Bannon, Rex Tillerson, and the others in Trump’s inner circle whose policies and ideologies are well-deservedly being scrutinized and criticized.

Seeing the Buddha in these people is no doubt going to be the greatest challenge of the engaged Buddhist. But if they can hold Trump and his administration to account with this bodhisattva-like attitude, then they may well have passed the ultimate test.

Buddhistdoor View: Words Matter—How Harmful Speech is Poisoning Society
How Wrong Views Lead to Errors in Judgment
The US Election and the Vajjians
Exploring Engaged Buddhism with Professor Christopher Queen