The concept of fire is referenced frequently in the teachings of Buddhism. In the Adittapariyaya Sutta, or Aditta Sutta (the “Fire Sermon Discourse”), the Buddha declares that the world is burning with the fires of greed, hatred, and delusion. The three fires, or poisons (trivisa), are also known as the three unwholesome roots (akusala-mula): attachment (lobha), aversion (dosa), and ignorance (moha). The Buddha explains that the path to attaining release from these fires, the causes of suffering, is by extinguishing them at their point of origin—the mind—through mindfulness, clear comprehension, and meditative insight. Nibbana (Skt. nirvana) is seen as the quenching of these fires.

The four primary elements, or cattaro mahabhutani, of earth, water, fire, and air are used in Buddhism as a means for understanding the material world and to transcend materialism and attain the supreme state of nibbana. The fire element, tejo-dhatu, represents heat and energy and includes any matter in which energy is in prominence. For example, internal fire elements include bodily mechanisms that produce physical warmth, ageing, and digestion. 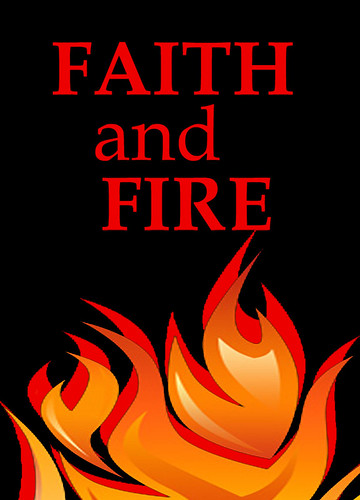 Recent years have seen the forging of a strong relationship in some Western countries between Buddhist communities and the fire and rescue services—a rather congruous coupling in view of the significance of fire in Buddhist teachings. Perhaps the best-known example of this relationship is described in Fire Monks: Zen Mind Meets Wildfire by Colleen Morton Busch, which tells the true story of the successful effort to defend the Tassajara Zen Mountain Center in California—the oldest Soto Zen monastery in the United States—from the massive wildfires of 2008.

In the United Kingdom, much of the work in cementing ties between Buddhist communities and the Fire and Rescue Services (FRS) has taken place through the organization Faith and Fire. An independent partnership established in 2013 between Fire Officer Daryl Oprey, the Chief Fire Officers Association (CFOA) lead on equality and inclusion, some FRSs, and other faith communities, Faith and Fire works to increase faith awareness among FRS personnel and volunteers, aiming to nurture mutual respect for all faiths. The Faith and Fire website offers information on a wide range of topics, including chaplaincy, interfaith dialogue, death and dying, post-traumatic stress disorder, and mindfulness, although it does not itself provide advice, counseling, or chaplaincy services. However, with Fire Officer Oprey’s imminent retirement the CFOA will no longer be involved in Faith and Fire, and the future role of Faith and Fire is currently under review.

Fire Officer Oprey has said of Faith and Fire’s work: “With respect to the fire service involvement, it is about us being a more inclusive, aware, and conspicuous service; not just about dealing with tragedy but preventing it. We treat everyone as members of society and appreciate that our service delivery needs to be shown as being adaptable and considerate of all faiths and cultures. It is not enough to believe that ‘one size fits all’.” (Faith and Fire) 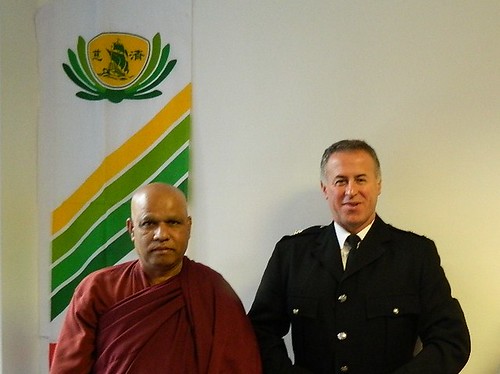 Ven. Piyatissa and Fire Officer Daryl Oprey at MBC in 2013. Image courtesy of
the author

The author, Jacquetta Gomes, was appointed as interfaith and multifaith advisor to Oprey in 2012. A member of the World Congress of Faiths, she has been involved in interfaith since the early 1980s.

In September 2011, Venerable Pidiville Piyatissa, head of Ketumati Buddhist Vihara, Manchester, led a retreat for the Buddhist Group of Kendal (Theravada) (BGKT) at Kendal Fire Station in Cumbria—probably the first time a Buddhist retreat has been held at an operational fire station in the UK. Ven. Piyatissa went on to lead similar retreats in Kendal from 2012–15, and also led sessions on Buddhism and mindfulness for personnel at Kendal Fire Station in 2012, in cooperation with the BGKT and Ketumati Buddhist Vihara. Faith and Fire grew out of this work in Cumbria and from the Manchester Buddhist Convention (MBC), where Faith and Fire has held talks and Q&A sessions every year since 2012. Faith and Fire hopes to speak at future MBCs to encourage more Buddhists to become involved in promoting fire safety and supporting their local fire and rescue service.

The World Congress of Faiths (WCF), an educational charity established in 1936, supports Faith and Fire and is represented on the organization’s steering group, which also includes Fire Officer Daryl Oprey, FRS personnel, and national faith leaders. Support from the WCF—WCF president Rev. Dr. Marcus Braybrooke and WCF chairman Rev. Canon Dr. Alan Race are members of the Faith and Fire Steering Group—has been invaluable in the development of Faith and Fire. In August 2013, the WCF invited the author to speak about Faith and Fire at a conference in Horsham, West Sussex, titled “Religious Freedom for Planet and People,” which was organized by the WCF and the International Association for Religious Freedom (IARF), a UK-based charity working for freedom of religion and belief.

In September 2014, Oprey gave an address about the CFOA and Faith and Fire at the Fire & Rescue Service Chaplains’ Association of the United Kingdom and Islands (FRSCA) Conference at the Fire Service College in Gloucestershire. The author also represented Faith and Fire at the Buddhist Chaplains Conference titled “Building a Bridge Through Spiritual Friendship” at Balliol College, Oxford University, in 2014.

The Asian Fire Service Association (AFSA), an independent employer-led support group in the UK that aims to raise the profile of Asian staff and associated issues, invited Ven. Pidiville Piyatissa, fire chaplain Ven. Galpottayaye Pemananda from Ketumati Buddhist Vihara, and the author to represent Faith and Fire at The Asian Fire Service Association Conference in 2013, 2014, and 2015.

Buddhists Engaged with Emergency Services (BEWES), which developed from Faith and Fire in 2014, is an informal group that enables Buddhists (advisors, chaplains, mindfulness teachers, volunteers, etc.) working with, or who have worked with, the emergency services and related organizations to engage with one another.

Australian firefighter Ven. Shih Jingang, a member of the Nien-Fo Ch’an Buddhist Order in Tasmania, is probably the first Buddhist monk to also work as a retained volunteer firefighter. Ven. Jingang has written for Faith and Fire and has supported BEWES in other ways. A brief history of Buddhist fire chaplaincy in the UK

The FRS in the UK consists of full-time and retained firefighters (paid firefighters who work on an on-call basis), as well as other staff and volunteers. Fire chaplains are “in the service but not of it” and are independent of the FRS structure. Chaplaincy is about meeting the needs of FRS personnel, including firefighters, who must deal with dangerous and challenging situations in the course of their work. Proselytizing of any religion is forbidden. The role of fire chaplains is to complement existing secular provisions, including counseling and occupational health, although the specifics of this role can vary between different fire services.

Buddhism has not had a long history in fire chaplaincy in the West—the first Buddhist Fire Chaplain is believed to be Rev. Alan Urasaki of the United States. “Rev. Urasaki also appears to be the only Buddhist fire chaplain in the country [the US]: in 2004 he was appointed as a volunteer chaplain with the Honolulu Fire Department” (Fisher 2013, 151).

In the UK, the first acknowledged Buddhist fire chaplain was Burmese Theravada Monk Ven. U Uttara, who served the London Fire Brigade from 2005. He has since returned to Myanmar. The presence of Buddhism in fire chaplaincy in the UK has expanded since then, as previously reported by Buddhistdoor.* In February 2014, East Sussex Fire and Rescue Service (ESFRS) appointed Ven. Pidiville Piyatissa as a Buddhist chaplain and the author as a Buddhist and multifaith chaplain. Also in 2014, Sakyadhita International Association of Buddhist Women recognized the author as the first female Buddhist fire chaplain in the world. In June 2015, Staffordshire Fire and Rescue Service (SF&RS) appointed Ven. Piyatissa, Ven. Galpottayaye Pemananda, and the author as fire chaplains. 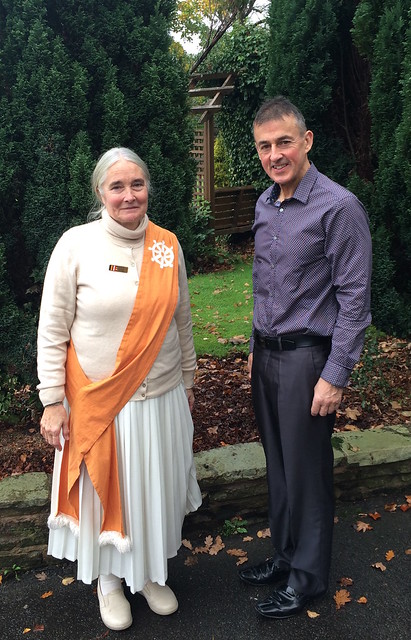 The author, left, with Des Prichard at the AFSA Conference 2015.
Photo by Ven. Pemananda

Des Prichard, the former chief fire officer and chief executive of ESFRS, commended the growth in fire chaplaincy in the UK, observing, “The Fire and Rescue Services welcome and embrace diversity and inclusion. We recognize that for many in our local communities faith plays a major part in their lives and we believe it is important that we learn more about different faiths, including Buddhism, in order to reach our aims and ambitions in serving the community. Our chaplain program not only provides this insight but also brings something unique to the service. We are able to draw on the strengths and skills of different faith leaders so they can offer support to our own staff.” (Faith and Fire)

SF&RS chief fire officer and chief executive Peter Dartford agrees: “I am delighted that we have widened the extent and scope of the support, advice, and guidance we are able to offer our staff. The wellbeing of members of our workforce is important and having the means to address all aspects of an individual’s life is vital. Our health and wellbeing strategy has been developed to provide support for the physical, mental, and spiritual wellbeing of everyone who forms part of our organization. Providing a wide range of supportive arrangements will ensure that we have the very best chance to meet whatever needs our colleagues may require during their careers.” (Faith and Fire)

I wish to express my personal gratitude to Peter Dartford, Daryl Oprey, and Des Prichard for their pioneering work in this area and to all of those who have supported their efforts and their legacy.