The city of Shanghai sparks alluring images: the glamour of the Paris of the Orient, the mesmerising breeze along the Bund, the Art Deco buildings in the former French Concession, and the futuristic skyline in the financial area of Lujiazui. Especially since the economic reforms of the 1990s, Shanghai has become one of the most exciting cities in the world.

Buddhism might be the last thing one would associate with a city such as Shanghai, as Buddhism often implies an ancient history and an ascetic lifestyle. However, although Shanghai is often perceived as a young and modern city, the earliest settlements in the region can be traced back to the Neolithic period. For instance, remnants of the Songze (崧泽) culture (3800–3300 BCE) were discovered in the present-day District of Qingpu. After Buddhism was introduced to China during the Han dynasty (206 BCE–220 CE), it did not take long for it to take root in the area of Shanghai.

If you have been to Shanghai, it is likely that you have passed by Jing’an Monastery at some point, due to its central location on 1686 West Nanjing Road. Founded in 247 by the prominent monk Kang Senghui (康僧会), a descendant of a Sogdian merchant family, the monastery was initially named Hudu Chongxuan (沪渎重玄) and was located on the north bank of Suzhou Creek. Legend has it that in the year 313, two stone Buddha statues miraculously floated down Suzhou Creek and arrived at the monastery. The statues were respectively inscribed with 维卫 (Vipashyin) and 迦叶 (Kashyapa), two of the Seven Buddhas of the Past. This legend is not only recorded in ancient texts,* but is also depicted in Dunhuang cave 323. In 1008, the monastery was renamed Jing’an (静安), meaning “tranquillity and peace,” and in 1216, it was moved to its current location. Like many Buddhist monasteries in China, Jing’an has experienced dramatic ups and downs throughout its history. During the Taiping Rebellion (1850–64), influenced by Christian teachings, Jing’an Monastery was set on fire. Only one main hall survived. It was quickly rebuilt with funding from the lay community, and in the first half of the 20th century, it served as a Buddhist center in Shanghai and even for the rest of China. A number of Buddhist leaders of those days stayed and taught at Jing’an Monastery, including Ven. Jing’an (敬安) (1851–1912), Ven. Yuanying (圆瑛)(1878–1953), Ven. Taixu (太虚)(1889–1947), and Zhao Puchu (赵朴初)(1907–2000), who was the second president of the Chinese Buddhist Association after the aforementioned Ven. Yuanying. When the Cultural Revolution struck China, however, Jing’an Monastery was robbed of its important artefacts and turned into a factory, only to return to its monastic function in the 1980s.

Today, the district in which Jing’an Monastery is situated has developed into one of the most commercialised and expensive areas of China. The district was named after Jing’an monastery, as were the metro station and the charming park in close proximity. Between 1998 and 2012, under the direction of the current abbot, Ven. Huiming (慧明), Jing’an Monastery was transformed into a majestic architectural compound. Built on a concrete foundation, its structure is completely made out of wood, following the style of Song dynasty. The chosen wood is teak, imported from Myanmar. The stupa at the back of the monastery measures 63.68 meters in height. Made in gilt bronze, its form is a fusion of the Mahabodhi Temple and a Chinese-style pagoda. Jing’an Monastery definitely strikes a powerful presence among the flamboyant high-rises surrounding it. 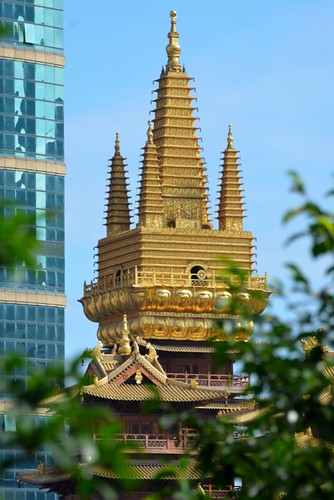 Upon entering the monastery, it feels as if one is entering another world filled with tranquillity and peace. Today, there are around 30 monastics residing at Jing’an Monastery. They all, at minimum, hold a bachelor’s degree from the Buddhist Academy of Shanghai or the Buddhist Academy of China. The abbot, Ven. Huiming, pursued a PhD degree in history from Fudan University—one of the most prestigious institutes in the country.

Monastic supervisor Ven. Yayun (亚蕴) told me: “We practice monasticism and adhere to the Vinaya as other sangha communities. We rarely go out of the monastery, but many people come to us.” Indeed, as a symbol of Jing’an District and of Shanghai, the monastery not only attracts Buddhist devotees and tourists from around the world, but also welcomes guests of various organisations from home and abroad. For instance, in 2010, to commemorate the 35th anniversary of diplomatic relations between China and Thailand, Thai Princess Maha Chakri Sirindhorn visited Jing’an Monastery and donated a Shakyamuni Buddha statue on behalf of the King. Buddhist devotees in front of the main hall. Photo by the author

People tend to assume that in Buddhism spiritual development and material success are contradictory, since the Buddha attained enlightenment after renouncing his worldly possessions. It is true that Buddhism advocates non-attachment, but it never denounced wealth itself. In fact, without the financial support of the lay community, the Buddhist Dharma would not have spread so far and wide. By donating to the sangha, devotees express piety and accumulate merit. The critical role of merchants in the diffusion of Buddhism is often overlooked. Let us not to forget that the Silk Road—the main route of Buddhist transmission from India to Central Asia and China—was essentially for trade and commerce. It was merchants who were the most mobile and active in the exchange of a plethora of ideas as well as goods.** In Chinese Buddhism today, devotees who contribute to monasteries are referred to as hufa (护法, Dharma protectors).

Moreover, Buddhism sheds light on how we should perceive, acquire, and employ wealth. Since the beginning of Buddhism, the principle of dana (giving) has guided Buddhists in their self-cultivation, and, furthermore, in working towards the welfare of all sentient beings. In 2006, Jing’an Monastery established the Buddhist Fuhui Fund (佛教福慧基金), and has, since then, given out tens of millions of Chinese yuan to building Hope Project schools, for natural disaster relief, and for initiatives to improve quality of life for the poor and the elderly. In fact, in the Yangtze River Delta—the most economically affluent region of China—Buddhist monasteries, whose numbers surpass those in other regions, take the lead in charity causes. In a sense, wealth manifests the benevolence and generosity of Buddhism. Ven. Yayun observes that, in recent years, there has been a strong resurgence of Buddhism in Shanghai, particularly among young people. “At school, young people are occupied with learning from textbooks and getting good grades,” he commented. “Once they enter university or the workplace, they have more time of their own and they experience more confusion and challenges. They start to contemplate the meaning of life and seek spiritual growth. More and more young people are genuinely interested in Buddhism and come to ask us questions.”

Being in the city center, Jing’an Monastery opens her doors to people from all walks of life. “We regularly organize lectures and mediation programs and they have proved to be very popular,” Ven. Yayun continues. “In fact, the number of qualified Buddhist teachers cannot fulfil people’s need for understanding and studying Buddhism nowadays. We have indeed improved the infrastructure of monasteries greatly, but we are very much lagging behind in the spreading of the Dharma. In former times, masters dedicated their life to Buddhist learning and practice, but today, it is not unusual to have monastics teach right after their graduation from Buddhist academies. Occasionally, we hear negative views about the sangha on the media. Sometimes they originate from ignorance and misunderstandings, but sometimes, they expose existing problems in contemporary Buddhism. There is still a lot we monastics need to work on.”

Today, there are more than 100 Buddhist monasteries in Shanghai.*** Apart from Jing’an Monastery, Longhua (龙华) Monastery, established during the Three Kingdoms period (220–80 CE), and Jade Buddha (玉佛) Monastery, established in 1883, are the most popular. Other Buddhist organizations include the Shanghai Buddhist Association, the Buddhist Academy of Shanghai, and Jushilin (Forest of Laity), a temple run by lay Buddhists in the city.

* For instance, see Yunjian Zhi (《云间志》) compiled in the fourth year of Shaoxi (绍熙) in the Southern Song dynasty (1193).

** I would like to thank Professor Stefano Zacchetti at Oxford University, who first pointed this out to me at one of our seminars, while I was studying at the Courtauld Institute of Art.

Buddhist attitude to Wealth
The Perfection of Giving