Home » Features » People and Personalities » An Interview with Renuka Gurung, Scholar of Paubhā, Part One

Renuka Gurung, PhD, is a leading master and scholar of traditional paubhā painting of Nepal. She completed her doctorate at the Prince’s Foundation School of Traditional Arts in London in 2013, and Prince Charles, the Prince of Wales, awarded Dr. Gurung the David Ciclitira Prize for her doctoral dissertation, which focused on the tradition of paubhā in 21st century Nepal. She studied the traditional method of early paubhā painting with the late Vajracharya priest Badri Ratna Guruju and spent 10 years learning the technical aspects of painting contemporary paubhā from Lok Chitrakar at his studio, Simrik Atelier, in Nepal.

Over the years, she has held group exhibitions in Nepal and Russia, and had a painting exhibited for the annual fundraising dinner of Prince Charles, who is also the patron of the Prince’s Foundation School of Traditional Arts. Four of her paubhā paintings were personally selected by the British prince for exhibition along with his other favourite artworks of artists representing the prince’s charities to mark his 70th birthday in the state gallery of Buckingham Palace. The show, “Prince and Patron,” was open to the public from 21 July–30 September last year.

Buddhistdoor Global: Could you please put into context the history of paubhā and its historical significance?

Renuka Gurung: In the past, there was a tradition of orally transmitting knowledge and skills—historical documentation seems to have begun much later in Nepal—therefore it is difficult to give an exact date for the dawn of the paubhā tradition in Nepal. However, from the study of early paubhā paintings in various international collections, it is apparent that paubhā reached its zenith of artistic excellence during the 13th century. Some magnificent surviving paintings dating to the early 13th century can still be seen in international museums, particularly in the US.

Some of them are: Amoghasiddhi, early 13th century in the Philadelphia Museum of Arts; Ratnasambhava in the Los Angeles County Museum of Arts; Amitabha in the Boston Museum of Arts; and Green Tara, 3rd quarter of the 13th century, in the Cleveland Museum of Arts. In 2010, Sotheby’s auctioned an early paubhā painting of a Vasudhara Mandala dated to 1365 and attributed to Jasaraja Jirala.

There may be much older paintings in private collections because in the past they were normally used as a medium for meditation and veneration until they were worn out and replaced. However, from my study it appears that the history of paubhā is closely associated with the Newar Buddhist community who painted them.

BDG: How were you inspired to carry out research for a PhD in the field? Lok Chitrakar, who we previously spoke to on paubhā,* noted that you were the first person to obtain a doctorate in the field.

RG: The techniques and traditional materials and methods, socio-religious beliefs, and philosophy and practices of the Newar Buddhist community in relation to paubhā painting, as well as the profound joy and peace that I experienced while painting paubhā, inspired me to engage in a deeper study and experience of this tradition. Also very important to me was the shift I saw between traditional, early practices and the contemporary scene or so-called “progression” in paubhā techniques. This shift, which I felt was a denigration of the original tradition, was one of the key factors that drew my attention to undertake research.

BDG: What do you think of the importance of artists such as Lok Chitrakar in trying to “revive” paubhā?

RG: Having spent quite a long time in the field painting paubhā, Lok-ji has mastered the skill of painting paubhā to a great degree. It is from him that I first heard the word “paubhā” while I was learning to paint these traditional paintings at his studio, Simrik Atelier, in Patan. It is important to have artists such as Loki-ji trying to revive paubhā.

I would like to state that when we talk about reviving the paubhā art, we need to be clear about what we are actually referring to—is it to revive the art as a commodity or to revive the tradition? When we pull this thread out, it forces us to consider the underlying fabric that holds the tradition of paubhā together across time and allows it to endure for future generations. Having said that, I think we need to truly understand what the word “revival” means at all in the contemporary context.

BDG: Who are some of the pioneers in this field?

RG: When we look at the history of the paubhā tradition, there are no historical documents as such that state anything specifically about early artists or pioneers. There have been, of course, mentions of the early chitrakāra painters or “Pun” in some publications, but not of particular early, traditional paubhā painters in detail. This could be because this area of art was neglected to such an extent that no one saw the need to explore the pioneers of the subject or to recognize their contribution to the art and culture of Nepal. Perhaps it was because of the importance of the tradition itself and passing it along, rather than the importance of any one person in that chain of transmission. Maybe, unlike today, the individual painter was not as important as the totality of support that made it possible for the tradition to endure over centuries.

BDG: Are there any other paubhā artists and scholars working in this field currently?

BDG: It seems it takes a long time for a paubhā artist to finish his or her work. Why does it take years to complete a painting?

RG: Painting paubhā is not an easy practice; it takes a long time depending on the size of the painting and the process that one has to go through in terms of methods and materials. Using materials such as mineral pigments or natural binders means that materials must be located and transformed through painstaking processes until they can be used to create the jewel-like finish that can be seen on the earliest examples of paubhā in the collections of international museums today. Using these processes means that the finished painting will not fade or decay over time. However, this also means that the artist needs to have a particular commitment to using these traditional techniques. It takes time and effort. 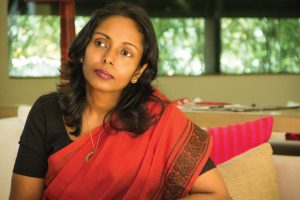 Buddhism for Women, Women for Buddhism: Institutional Problems and Solutions