Walking along the prairie cliffs north of Santa Cruz I come across a whale skeleton, stark unexpected sight, exhibit of the Marine Discovery Center. I remember that several weeks ago, gazing from West Cliff toward the ocean, we saw what appeared to be a tiny new island. Scrutinizing awhile, we realized it was a whale corpse, covered with birds, caught in a bed of kelp, eerily still. I felt such sadness, and wished with all my heart to see a live whale. In less than 30 minutes my longing was met, as a vibrant whale surfaced, rolling nearby in the same poignant waters.

I spent six years in closed (small group) retreat, sandwiched inside a decade of living up on the mountain near the Buddhist center I am affiliated with, away from civilization. I can confidently say I’m an expert in not knowing how to reintegrate into the world. I have to ask myself if I was ever integrated in the first place; what is this world and how (or why) does one reintegrate into it? These questions plague me rather than offer me any insight or sense of contextual comfort. Something about the whales and the ocean helps me to at least assimilate the questions. I guess the mountain life and being in contemplative retreat, close to my teacher, are something I didn’t ever want to have to leave.

As I walk now on the bluffs by the ocean, palm-sized bunnies, and their parents and siblings, jump around the legs of picnic tables. Lizards skitter by, the same lizards and bunnies (and mountain lions, coyotes, hawks) that I lived among for a decade on the mountainside. The bunnies here seem equally used to humans and only startle and hide under low-lying wildflowers when I approach within arm’s reach. They breathe heavily, standing by, unafraid—or are they paralyzed by fear? At times these two feelings are quite similar, I find. Paralyzed by fear: How to start over after retreat? Find a job, an apartment I can afford, community, like-hearted people, places to play on the earth. And unafraid: Doing it anyway, even alongside the fear, sometimes feeling at one with things, melding with the landscape, gazing into the ocean, toes in the sand, wishing for a bicycle to ride again, a puppy, a boyfriend. Jane, my friend and yoga teacher, had been walking along the cliff with me when we spotted that first whale. She cried out, “It’s a whale, a dead whale!” What does this mean for us? For our world, the environment, oceans, creatures, ourselves, our society. What is this society we’ve created in which whales, fish, birds, insects, bees, frogs, creatures, species, peoples, attention spans, languages, creativity, tolerances are dying at alarming rates? What are we doing? What have we done? Can it be undone? I’ve been working the past few months at a small nonprofit, educating and advocating for climate change action for our tender home planet. The juxtaposition of my windowless, airless, bleak office with the exterior riot of flaming red-orange-peach-pink poppies in the landscaped garden kind of says it all. I take breaks whenever I can from staring obligatorily at my screen to take giant gulps of fresh air outside.

Only two things can soothe my every ache, wound, and question: wisdom teachings and Mother Nature, in all her animal, vegetable, and mineral glory (and those who likewise revere and crave these two.) Sea, path, wind, awareness, waves, sand, continuity, skies, stillness, clouds, truth, trees, connectedness, creatures, the way. I miss the native habitat of the mountain, its wild boars, my fox companions, the quivering quail. I am engulfed now by concrete, and by humans who inhabit the Internet as if it were a country.

I find myself alone too much, afraid too much, sad too much, and I wonder—is buying a bicycle going to fix this? Is finding a partner going to fix this? What if I move away? Find a better job? One that enables me to save and buy a tiny house or piece of land, some place I can nestle into and belong? Do I have to keep being alone? Maybe it’s time to get a dog again. How can I get a dog again when I have no stable place to live? I fall in love with beautiful hound dogs tied to parking meters in San Francisco and wonder if I’m becoming “that crazy dog lady.” I fantasize briefly about dog-napping him, the pup with one blue and one golden eye, who I could rename Bowie. Who but a dog could tend this tangled mess of me? 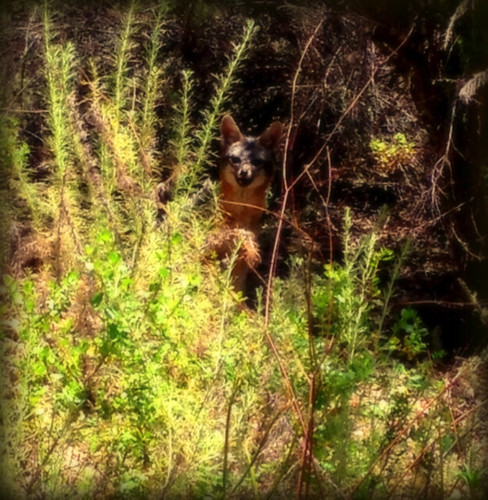 I stare at the bleached skeleton, beached here in the parking lot, wondering what the whale felt while she or he gamboled through rollicking ocean surf. Nothing but the sensations, instinct, power, spiraling, gliding, glistening, the family-ship, the community-ship, without having to think, just knowing how, always in the right place, always feeling part of the whole, without anxiety besides the inevitable fear or aggression of being prey or predator. Do whales have any predators besides the cunning, calamitous human?

I stand photographing the skeleton, thinking I don’t know how to photograph, nor how to write—do I have to relearn everything? By doing, studying, apprenticing, divining, pretending? What if there is a deep, dire need to express and yet nothing rises to the surface? Matisse said that if he wasn’t able to access his emotional palette, he would go and ride his horse until emotions arose freely once more.* Color and gesture flowing from heart through limbs onto canvas. Having the nerve, the chutzpah, the patience, the discernment to know—when to persevere, how to let go. Maybe a burning desire to share or say something, a genuine wish to commune or connect—could this be the only way one integrates or reintegrates again and again into a bigger picture? Perhaps, then, it is time to return to art, where it all began. I’ve known these last many months a feeling of lost-ness, of yearning, and the patience I was born with, and continued to cultivate in years of retreat, keeps me from going completely off the deep end, though I teeter uncomfortably close to it, too often. Sun-kissed bones of the skeleton by the shore attest to the cycles we are all bound to, continuity of time. Like the naturally elegant whale I was fortunate to see, bursting with life on a sunny windswept Tuesday, I too must dive in again deep, even if waters are cold, dark, enigmatic. I will not be alone there. And I will remember how to swim, even if it is not linear, not obvious, not endeavoring through tenacity but led by grace. Maybe a return to my origins as an artist is the way to rethread the needle, arts being the only language to weave the conceptual with the perceptual, through the faculties of all five senses, including the sixth, awareness. Art interlaces the spaces in the fabric of the unknowable, weaving our ineffable humanness, fragile beauty, and precious curse.** As rainwaters flow down from the mountaintop, streaming back to sea, so am I poured back into the world, ancient returning, despite myself. We lie in corpse pose at yoga’s close, and Jane softly intones, “This is the present moment. This is your aliveness.” 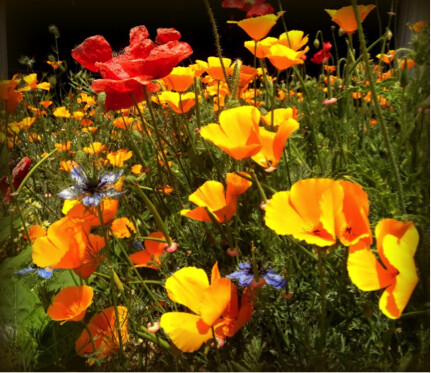 A Vajrayana Buddhist practitioner since 2000, Sarah C. Beasley (Sera Kunzang Lhamo) spent over six years in retreat under the guidance of Lama Tharchin Rinpoche and Thinley Norbu Rinpoche. She is an experienced teacher, writer, sculptor, dancer, and Iyengar yoga practitioner. Sarah offers a workshop, “Meditations for Death, Dying & Living,” based on the text Vajrasattva Ceremony for the Dead (Concise Nay Dren). For more information, email seraklhamo@yahoo.com

Special thanks to Jane Freedman, Pilar Martin, and Kenneth Janssen