Dilgo Khyentse Rinpoche (1910–91), recognized as the mind emanation of Jamyang Khyentse Wangpo (1820–92), the renowned teacher, scholar, and terton who revived Tibetan Buddhism in the 19th century, was one of the greatest Tibetan Buddhist masters of the 20th century. As in his previous incarnation, Rinpoche had more than 50 teachers from all of the four major schools of Tibetan Buddhism. His root guru was Shechen Gyaltsab Rinpoche (1871–1926) of Shechen Monastery, and Jamyang Khyentse Chökyi Lodrö (1893–1959), the activity emanation of his previous incarnation, who belonged to Nyingma and Sakya schools, respectively.

Rinpoche would frequently invite teachers from different schools and lineages to spread the teachings of their lineages—especially those teachings that were in danger of declining. As Rinpoche stated in his autobiography Brilliant Moon: “During this current final period, the splendid statements and realization of the precious Buddhist doctrine are enveloped in darkness, and the sun of most of the genuine learned and accomplished beings has set.” Rinpoche strived to revive those declining teachings; he preserved the precious teachings of all schools and, throughout his life, never stopped receiving teachings. 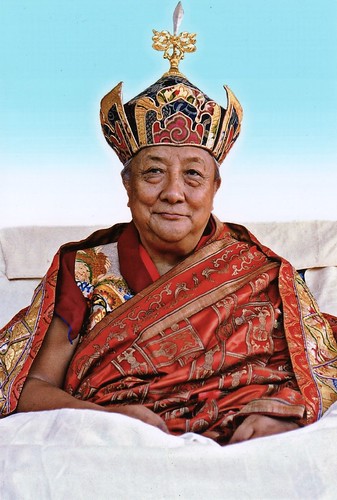 Once in Nepal, there was a dirty monk who came to see Rinpoche. Rinpoche’s attendant neglected the monk and asked him to wait in a corner, but the monk entered Rinpoche’s room anyway. Later that day, Ripoche’s grandson Shechen Rabjam Rinpoche (b. 1967) came to see Rinpoche, but the door was locked. He asked what had happened and the attendant explained that Rinpoche was receiving teachings from the old monk—a Sherpa who had received some teachings in Tibet that Khyentse Rinpoche had not yet received. In this way, little by little, Rinpoche was able to preserve the precious teachings of Tibetan Buddhism and spread them to India, Nepal, and the whole world. For this reason, many of the contemporary masters of Tibetan Buddhism from the four major schools are students of Khyentse Rinpoche.

When teachers from the four schools would visit Rinpoche to request teachings, he always gave them the most suitable teachings, in accordance with their wishes and their needs. Every day, no matter whether he was having a meal or otherwise occupied, Rinpoche was always ready to give whoever came to see him—lamas, students, of high or low rank, from any lineage or tradition—whatever teachings they needed at that moment. Rinpoche would always encourage students to study with different teachers, and he would also invite teachers from different schools to give teachings. Even when Rinpoche had received a teaching before, he would still join with other students to receive the teaching himself. In this way, Rinpoche demonstrated the importance of respect and devotion for the teachings and the teachers of different lineages; he had a genuine, pure vision toward all the lineages of the entire Buddhadharma. “Wisdom embodiment of all Buddhas’ double omniscience, manifestation of great love and wisdom—Manjushri, chariot of the Buddha's teachings—lord of all learned and accomplished ones, Pema Dongak Lingpa, to you I pray.” This is the most popular supplication to Dilgo Khyentse Rinpoche, in which Pema Dongak Lingpa is an alternative name for Rinpoche, indicating that Rinpoche was not only a master who had perfected learning and realization, but also a terton; a treasure revealer. Guru Padmasambhava hid many teachings in different forms in various places when he spread the Buddhadharma in Tibet. He prophesied that these teachings would be revealed by the emanations of himself or his students in the future, when conditions were ripe, in order to benefit those beings in the most effective way.

Rinpoche revealed many treasures, including Heart Essence of the Self-Born Lotus (Rangjung Pema Nyingtik) and the Nyak Kilaya. Heart Essence of the Self-Born Lotus was revealed in Tibet when Rinpoche was in his 20s, however the text of this practice was lost during his escape from Tibet. His students later requested that Rinpoche reveal this treasure again in Nepal. The text that was lost in Tibet was also later recovered and the content of the two texts were shown to be nearly identical, illustrating that the treasure teachings are the unmistaken doctrine, arising spontaneously from the enlightened mind of the realized one. Those who attended Rinpoche’s teachings in person knew that he could teach effortlessly, without pause, for long periods. Rinpoche was known as the manifestation of the bodhisattva Manjushri, and the pleasant and gentle sound of Dharma would fill the mind stream of his students like nectar. In striving to preserve and reprint the precious texts of the Buddhadharma, Rinpoche published more than 300 volumes of text. The treasure teachings and other writings of Rinpoche himself were also published as 25 volumes of collected works. The compassion of Rinpoche was immeasurable. When he was still in Tibet, he once traveled to Derge, where he visited the home of his nephew. Rinpoche’s sister showed him the famous gun of his nephew that had killed so many animals and asked Rinpoche bless it. Rinpoche blew on the gun, after which it never fired again and his nephew stopped killing. Afterward, whenever Rinpoche visited their home, the family would hide all their guns. If we can share Rinpoche’s deeds of wisdom and compassion, it is never-ending. I hope that we can all draw inspiration from the life stories of Dilgo Khyentse Rinpoche, and follow the teachings of the great masters to mature our minds. In this way, finally, can we can work towards the aspiration of the great master, to free all sentient beings from samsara.