Yelo Rinpoche during the tantric rituals in Elista. From shakyamuni.ru

SOFIA—The senior Gelug teacher Venerable Yelo Rinpoche (also known as Yeshe Lodoy Rinpoche) visited Kalmykia from 14–25 September to lead the annual tantric rituals and give Dharma teachings. Rinpoche  is based in Buryatia and was invited by Telo Tulku Rinpoche—the shadjin (head) lama of Kalmykia—the monastic community, and lay practitioners of the Russian Buddhist republic. The program was held in the largest Buddhist temple in Europe, the Golden Abode of Shakyamuni Buddha, also known as the central khurul (temple)—in the Kalmyk capital, Elista.

From 15–19 September, Yelo Rinpoche and Telo Tulku Rinpoche led tantric rituals aimed at removing obstacles on the spiritual path and developing peace and prosperity among the people of Kalmykia and the whole of Russia. These included the Tibetan Buddhist rituals of yangdrab, jinseg, torgyag, and tangrag kangso. Yangdrup is a ritual for fortune, luck, and prosperity that it said to bring wealth, riches, fame, and success in life. Jinseg is a fire ritual that includes burning offerings, using the fire element to attain enlightened activities quickly and powerfully. Torgyag is the practice of throwing tormas (ritual cakes, hand-molded from butter and tsampa, or roasted barley flour) meant to remove obstacles. Tangrag kangso is an offering ritual to Dharma protectors like Mahakala, Palden Lhamo, Yamantaka, and Damchen. His Holiness the Dalai Lama with Yelo Rinpoche. From khurul.ru

The tradition of organizing the annual rituals, which are attended by a large number of Buddhist followers, was revived in Kalmykia in 2004 when monks from Gyudmed Tantric Monastery visited the republic at the invitation of Telo Tulku Rinpoche. It is believed that attending the rituals helps to purify negative karma, accumulate good merit, and create an auspicious link (Tib: tendrel) with the spiritual practice.

After the completion of the rituals, Yelo Rinpoche gave teachings and empowerments at the prayer hall of the central khurul. From 20–21 September, he gave commentaries on the mind training (Tib: lojong) text The Wheel Blade of Mind Transformation, composed by the ninth century Indian Buddhist master Dharmarakshita. And over the next three days, he bestowed the empowerments of the Tantric female deity Vajrayogini and the blessings (Tib: jenang) of Dharma protector Mahakala. His program in Elista completed with commentary on the Diamond Sutra, followed by a visit to Lagan, the second-biggest city in the republic. On 25 September, he met with Buddhist followers at Laganski khurul and gave refuge. 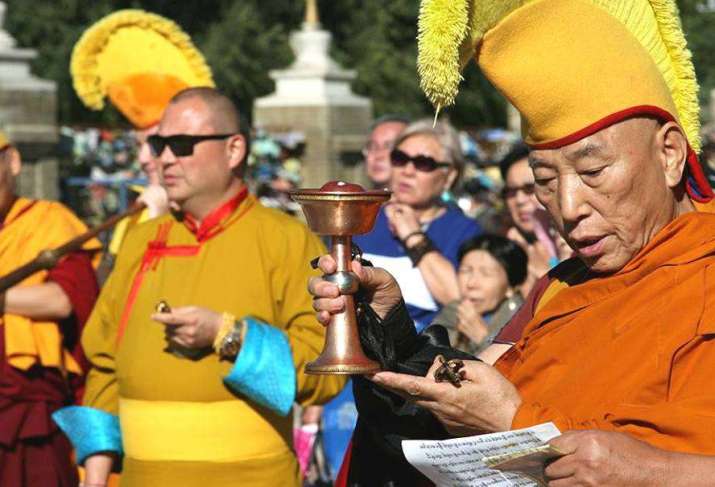 Yelo Rinpoche and Telo Tulku Rinpoche during the tantric rituals in Elista. From shakyamuni.ru

Yelo Rinpoche was born in Tibet in 1943. At the age of three he was recognized as the fourth reincarnation of Yelo Rinpoche, and four years later he took monastic vows. He joined Drepung Gomang Monastery, part of the Gelug school, when he was 13 years old. In 1959, after the invasion of Tibet, Yelo Rinpoche left his homeland and went to India. In 1963, he received the vows of a fully ordained Buddhist monk (Tib: gelong) from His Holiness the Dalai Lama. In 1972, he entered the Central Institute of Higher Tibetan Studies in Varanasi, India, where he received the title acharya (Tib: lopon).

After that, Rinpoche worked in the Library of Tibetan Works and Archives in Dharamsala and continued his education in Drepung Gomang Monastery in southern India. In 1979, after intense study of Buddhist philosophy, Yelo Rinpoche attained the highest level of education in the Gelug tradition, known as geshe lharampa, which is equivalent to a doctorate degree. In 1993, he moved to Buryatia, one of the Buddhist republics in the Russian Federation, following the advice of His Holiness the Dalai Lama, and in 2004 established Datsan Rinpoche Bagsha Temple in the capital Ulan Ude. Yelo Rinpoche performs rituals in front of the Golden Abode of Shakyamuni Buddha. From facebook.com/buddhismrevival.ru