His Holiness the Dalai Lama greets well-wishers as he arrives at the Kalachakra Maidan on Sunday. The Dalai Lama is expected to remain in Bodh Gaya until 2 February. From dalailama.com

Security forces in Bodh Gaya, in the northeastern Indian state of Bihar, are conducting an investigation after two crude explosive devices were discovered late on Friday, following a reported “low-intensity” explosion near the Kalachakra ground, a site for public gatherings and events. His Holiness the Dalai Lama is currently in Bodh Gaya, where he is conducting a series of teachings and empowerments, along with thousands of followers from around the world. The Dalai Lama had already retired for the day, having completed his teaching, when the explosion was heard on Friday night.

“It was a low-intensity explosion which alerted the security forces and prompted them to search the entire area,” a security official told reporters. “They recovered two bombs packed in cans, which were later destroyed. Security in the area has been stepped up and a massive probe is being carried out.” (The Asian Age)

According to local media reports, officials from India’s National Investigation Agency (NIA) believe the small explosion occurred near a generator by a tea kitchen set up just outside the maidan. A burst thermos flask was found, which police believe may have been the cause. A subsequent investigation led to the discovery of two explosive devices described as “cane bombs”—one near the Sri Lankan monastery in Bodh Gaya and another by gate No.4 of the ancient Mahabodhi Temple complex that marks the location where the historical Buddha is said to have attained enlightenment some 2,500 years ago.

“We always make elaborate security arrangement for such events and vigilant police have recovered the two bombs from the site,” a senior police official said. (The Hindu) 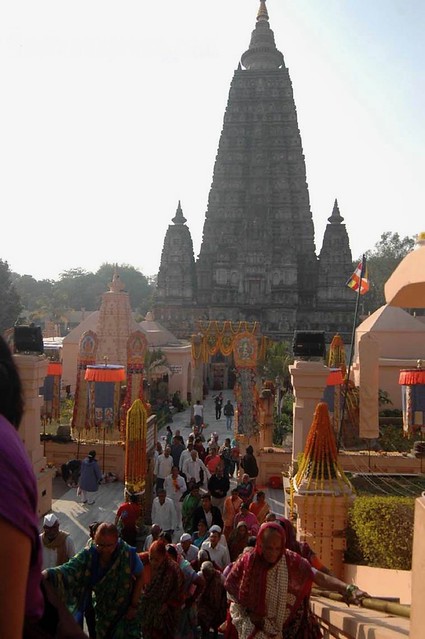 Security has been beefed up around the Mahabodhi Temple complex
and other sensitive sites in Bodh Gaya. Photo by Ashok Sinha. From
indianexpress.com

A police inspector-general told The Telegraph newspaper that he had reviewed the Dalai Lama’s security arrangements and increased the number of officers assigned to His Holiness.

“The police have some definite leads and the investigation is proceeding in that direction,” a senior police official said. “An alert has been sounded and devotees are being advised not to touch any abandoned article.” (The Telegraph)

The Tibetan spiritual leader has been in Bodh Gaya, where he is residing at the Tibetan temple, since the beginning of January and is expected to remain until 2 February for the month-long Kalachakra Puja. Some 10,000 Buddhist pilgrims from across the Himalayan region and around the world, including actor Richard Gere, have traveled to Bodh Gaya to attend the scheduled teachings.

“[Our] vigil has been intensified in the entire town. Every visitor is being checked and has to pass through metal detector gates,” said a senior police official. (The Hindu)

On Monday, police and intelligence sources on reportedly said that the Dalai Lama was not the intended target of the explosive devices. “The Dalai Lama does not appear to have been the target as he was not scheduled to cross the routes where the two bombs were placed. But Buddhists could have been the target,“ a police official said. “There is a heavy inflow of monks during evening prayer. The second bomb, found opposite Mahabodhi Society, is on the route of the monks. We need to look beyond predictable angles of suspected [Indian Mujahideen] involvement to avenge atrocities against Rohingya Muslims . . .” (The Indian Express) Security has been stepped up after two explosive devices were discovered on Friday. From indianexpress.com

Security in Bodh Gaya has been stepped up since the devices were found, particularly at foreign monasteries and other potentially sensitive sites, with additional security personnel deployed.

“We have to take it seriously. In each explosive, about 7 kilograms of ammonium nitrate appears to have been used and then the explosive was placed in thermos-like containers,” said a police source, adding that it was only a matter of luck that the explosives were found in time. (The Indian Express)

A forensics department source said the explosives would have resulted in “medium-scale” damage had they been detonated: “This is probably the first time such [a] heavy amount of explosives was placed.” (The Indian Express)

In July 2013, a series of 10 bombs exploded in and around the Mahabodhi Temple complex, a UNESCO World Heritage Site, injuring five people, including two Buddhist monks. Three other devices were defused by bomb-disposal personnel. The NIA subsequently concluded that the Indian Mujahideen terrorist group was responsible for the blasts.