From 13-14 April the Center of Buddhist Studies (CBS) at The University of Hong Kong (HKU) hosted an international conference titled, “Buddhist Values and Economics: Investing in a Sustainable Future.” The conference, sponsored by GS Charity Foundation Limited, drew speakers and workshop presenters from across North America, Europe, Australia, and Asia. The conference addressed a wide range of perspectives, from academic analysis of early Buddhist texts and interpretations of wealth to contemporary applications of Buddhist values for business leaders and investors.

The co-organizer of the conference was the European Spirituality in Economics and Society (SPES) Institute, under the Presidency of Professor Laszlo Zsolnai. The institute, founded in 2004 in Leuven, Belgium, aims to foster greater international understanding and practice of spirituality in economic and social life.

In his introductory keynote address Saturday morning, Prof. Richard Payne of the Institute of Buddhist Studies in Berkeley, California, noted that historically, Buddhism has existed in a context of exchange economy. Modern capitalism, he continued, with its ideals of individualism and rational choice are foreign to Buddhism, since the latter rests on the premise that people are driven instead by varying degrees of ignorance. Charles Lief, President of Naropa University, delivered a paper which was more optimistic about integrating Buddhist ideas into contemporary business, citing the example of the large corporate insurance company Aetna, which has successfully implemented a mindfulness program for its employees.

Prof. Hendrik Opdebeek then spoke of the urgency of addressing economic concerns with an ideal of “enough” rather than a proliferation of consumer goods; and Prof. Knut Ims offered the example of Deep Ecology pioneer Arne Naess as a way for Buddhists to reflect on ideals of prosperity and flourishing and potentially challenge contemporary consumerist ideals.

In a second keynote on Saturday, Dasho Karma Ura, President of the Centre for Bhutan Studies & Gross National Happiness, spoke of the exploitation of labor as a form of “taking what is not given,” the avoidance of which is the second lay Buddhist precept. Papers continued through the afternoon exploring Buddhist perspectives on material wealth by Prof. Ven. Jing Yin and Dr. Guang Xing of the University of Hong Kong.

University of California, Berkeley economist, Prof. Clair Brown, offered the keynote address on Sunday morning, pointing out ties between wasteful economic choices and our current ecological crisis. She noted the correlation between income inequality and unhappiness around the world, using a chart showing that the United States of America has uniquely high levels of both. Her call was for citizens to realize that we are all in this together and that governments must choose a more sustainable path forward for the sake of future generations.

A closing workshop on Day Two, led by Debra Tan, Director of China Water Risk, emphasized the importance of the Tibetan plateau, often refered to as the “third Pole” because of the amount of fresh water stored there in glaciers. Global warming, Tan warned, is effecting the plateau at twice the average rate of the planet, which will lead to drastic reduction in existing glaciers, effecting the fresh water supplies of over a billion people living in the region.

The conference showcased a wide variety of perspectives in addition to those discussed here, across both geography and varied disciplines in both academia and the business world. In the closing session, Ven. Phra Dr. Anil Sayka, Rector of the World Buddhist University in Thailand, noted that the very term “sustainable” is derived from the Latin sustinere meaning “to hold up, to support or bear” and this is nearly identical to the root meaning of the Buddhist term “dharma,” which is “to hold firmly, support.” Thus, he suggested, in our promotion of sustainable economic ideals, we are in turn promoting and promulgating the Dharma. 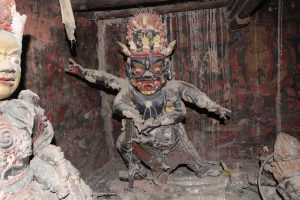