HONG KONG—The Civil Affairs Bureau of Taichung City in western Taiwan has launched a “Card of a Fulfilled Life” as part of an initiative to promote environmentally friendly funerals and to encourage funeral autonomy—enabling people to express funerary preferences that may differ from traditional expectations.

Representatives from various religious organizations, including Taichung’s Buddhist community, Chung Tai Chan Monastery, the Presbyterian Church, and the Taoist Association attended a launch ceremony for the project on 24 January. The Card of a Fulfilled Life encourages people to consider green funeral, aiming to reduce the environmental pollution and consumption of resources associated with traditional burial practices. Representatives from different religious organizations attend the launch ceremony for the “Card of a Fulfilled Life.” From chinatimes.com

The Civil Affairs Bureau invited experts from the Taiwan Natural Burial Association and scholars from the Department of Life and Death at Nanhua University to an onsite demonstration of an environmental burial ceremony accompanied by care services. In addition, families who had chosen tree burials for their loved ones shared their stories and experiences at the event. More than 100 members of the public attended the launch. The bureau aims to facilitate preplanned funerals, with the underlying goal of protecting the Earth.

“The government has been actively pushing natural burial,” said Guo Huijuan, chairman of the Natural Burial Association. “Whether it is a tree burial, flower burial, grass burial, or scattering ashes at sea, a natural burial is still ‘avant-garde’ to many people.” (China Times)

Guo emphasized that funeral autonomy is very important: “People should have the right to decide—to express his or her wishes for their funeral while they are able to make the decision. This also can help to avoid confusion for families arranging the funeral.”

Taichung Civil Affairs Commissioner Zhou Yonghong signed a card at the launch. “In recent years, people have gradually changed their understanding of funeral rituals,” he observed. “More people agree that environmental funerals can reduce the consumption of land resources and leave more clean living space for their children and grandchildren.” (China Times)

Taichung is the first city in Taiwan to launch the Card of a Fulfilled Life. Although not mandatory, the card offers a way for people to express their wish for family members to respect his or her end-of-life requests. 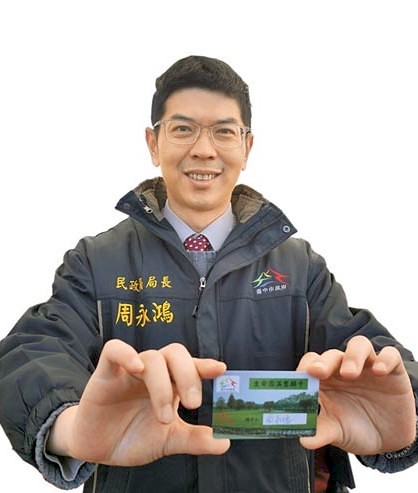 Taichung Bureau of Civil Affairs Commissioner Zhou Yonghong
shows his own “Card of a Fulfilled Life" at the launch ceremony.
From chinatimes.com

The concept of green funerals is also taking root in nearby Hong Kong, although the trend has yet to keep pace with its adoption in Japan, South Korea, Taiwan, and elsewhere in Asia. Taiwan’s experience shows that with the community and government policies working together they have already seen green funerals account for around 10 per cent of total funerals in the last decade. These include more than 4,000 crmonies for scattering remains at sea and in the city’s gardens of remembrance in 2015, accounting for 8.7 per cent of total funerals. 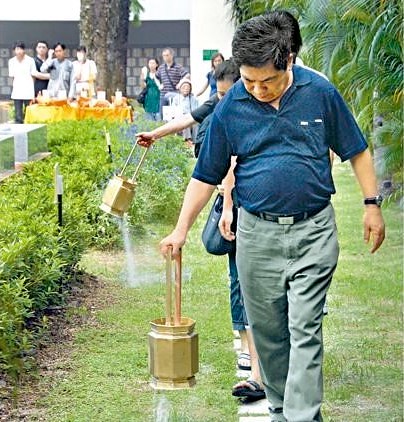 In Hong Kong, more people are choosing green funerals,
including scattering remains in the city’s gardens of remembrance.
From news.gov.hk

The closed nature and opaqueness of Hong Kong’s funeral industry and a lack of understanding among the general public has been blamed for the low adoption rate of green funerals in Hong Kong. Many people in Hong Kong have not been able to receive a funeral that truly belongs to themselves and their families, not to mention one that minimizes the environmental impact.

In recent years, Hong Kong’s government has been taking active steps to promote green funerals, aiming to bring about a gradual change in the local mindset and culture. Among the initiatives are free memorial sailings during the traditional Ching Ming and Chung Yeung grave-sweeping festivals, which enable the public to pay their respects to loved ones whose ashes were scattered at sea.

Paula Ng was on board one such vessel to the island of Tung Lung Chau to mourn her late husband. “My husband loved to travel. He liked taking photos and was a nature lover, so we wanted to follow his preferences,” she said, adding that her husband had no doubts about having a funeral at sea after he saw a TV advertisement introducing green funerals. Free memorial sailings provided by Hong Kong’s government during the traditional Ching Ming and Chung Yeung grave-sweeping festivals enable people to pay their respects to loved ones whose ashes were scattered at sea. From news.gov.hk

The superintendent of Hong Kong’s Food and Environmental Hygiene Department, Leung Yat-king, said the department has increased the allocation of resources to work closely with cremation service providers, religious groups, and hospitals to promote green funerals. To further boost awareness, the promotions not only target elderly members of the community, but also younger generations, to ensure that environmental awareness is part of the future. The environment in Hong Kong’s gardens of remembrance is peaceful and quiet. From news.gov.hk

Film Premiere: Powerful New Documentary Follows the Life of a Buddhist Priest Dealing with Suicide
Buddhist Temple in Tokyo Offers Graves for LGBT Couples
Mushrooms Offer the Prospect of a Greener Afterlife
Do Animals Grieve?
Meditation on the Morbid in Thailand Offers Insights into Impermanence

A Student Death
Beauty and Sadness: Reflections on a Japanese Noh Play