SOFIA—Three senior lamas from one of the most renowned centers of Tibetan Buddhist learning, contemplation, and practice, Drepung Gomang Monastic University, are visiting Moscow from 14 February–11 March to give teachings on Buddhist philosophy and Tibetan religious traditions and conduct tantric rituals for Russian Buddhists. The official delegation consists of Tulku Tenzin Geleg Rinpoche, Geshe Sonam Choydar, and Geshe Lodro Jinpa, each of them experts in sutra and tantra teachings.

The monks are conducting a series of events at the Ethnocultural Center Selenge from 15–25 February, which began with a ritual for the Protectors of Dharma, known as Gutor and practices for dispelling negative influences, including the Heart Sutra and the mantra of the lion-faced dakini Singhamukha. On 16 February, during celebrations for Losar, the traditional Tibetan New Year, the monks led practices dedicated to the female protector Palden Lhamo and White Tara. The program from 17–25 February includes sutra readings, prayers for the deceased, practices with the wrathful deity Yamantaka, the female protector Sitatapatra, and the Medicine Buddha, and six initiation and empowerment rituals. 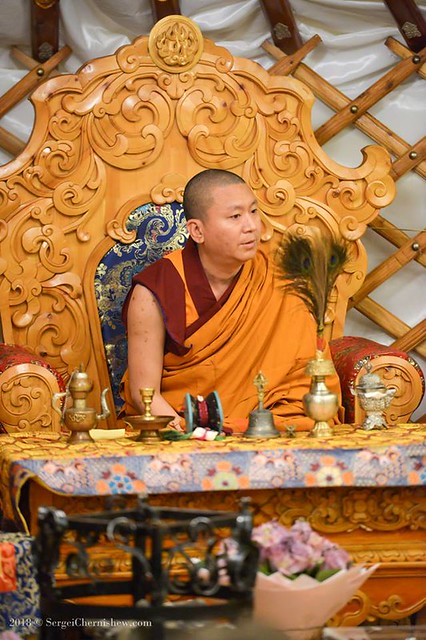 The next stage of the visiting monks’ program will run from 27 February–2 March at the Fund Drepung Gomang Center, and will be dedicated to the long life of His Holiness the Dalai Lama. According to the Central Tibetan Administration’s Department of Religion and Culture, following instructions of the protector deity Nyenchen Tanglha received by the Nechung Oracle, to strengthen the health of His Holiness, his followers are requested to read the mantras of the Medicine Buddha, Shakyamuni Buddha, and Vajrasamaya. From 3–4 March, Tenzin Geleg Rinpoche will conduct two rituals at the Center Karma Drodul Ling. The first is a long-life practice with Ushnishavijaya, one of three long-life deities along with Amitayus and White Tara. The second is a Green Tara initiation (Tib. jenang). The Gelug monks’ visit will conclude at the Cultural Center White Clouds from 6–11 March, where they will perform ceremonies of purification, protection, and accumulation of merit. Before each ritual, Tenzin Geleg Rinpoche will explain its meaning and benefit.

Drepung Monastery, the largest in Tibet, was founded in 1416 by Jamyang Choje Tashi Palden (1379–1449), a disciple of Je Tsongkhapa (1357–1419), the founder of the Gelug school. The monastery is divided into seven colleges: Gomang, Loselling, Deyang, Ngagpa, Shagkor, Gyelwa, and Dulwa, of which Drepung Gomang Monastic University is the oldest. It has produced many eminent scholars who contributed to the dissemination of Tibetan Buddhism. After 1959, 60 monks from the monastery fled Tibet and re-established the monastery in southern India.

Since then, monks from Mongolia, Inner Mongolia, and the Russian Federation have attended Drepung Gomang Monastic College to complete their Buddhist studies. Drepung Gomang Monastery in India, which currently accommodates about 1,850 monks, is headed by Khen Rinpoche Geshe Lobsang Gyaltsen, who was appointed abbot in 2015 by the Dalai Lama. Attendees at the Ethnocultural Center Selenge. Photo by Sergei Chernyshev