His Holiness Kathok Getse Rinpoche Gyurme Tenpa Gyaltsen, the seventh head of the Nyingma school of Vajrayana Buddhism, is reported to have died following an accident on Monday in Pharping, Nepal. He was 64.

Rinpoche is reported to have suffered a serious injury after he slipped while leaving a retreat center near the village of Hattiban outside Kathmandu. He subsequently died from his injuries and his body was moved to Adzom Kathok Choekhorling to allow members of the public to pay their respects.

The Central Tibetan Administration, the Tibetan government-in-exile, on Thursday organized a prayer service to commemorate Kathok Getse Rinpoche, during which the officiating president and kalon of the Department of Religion and Culture, Venerable Karma Gelek Yuthok offered his condolences to Rinpoche’s followers and devotees and prayers for his continued blessing and swift reincarnation.

Rinpoche, the fourth holder of the Kathok Monastery lineage, was appointed to a three-year term as the seventh head of the Nyingma school of Vajrayana Buddhism in January, succeeding Taklung Tsetrul Rinpoche (1926–2015).

Representatives of the Nyingma school appointed Kathok Getse Rinpoche and five other Nyingma lamas—representing the six main monasteries of the Nyingma tradition—as the school’s most senior leader on a three-year-tenure basis by unanimous decision during the 29th Nyingma Monlam gathering in Bodh Gaya, India in January this year. 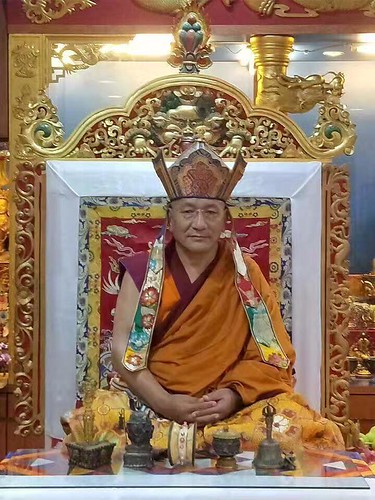 The original seat of the Kathok lineage is Kathok Dorje Den in Kham Khatok, Tibet, which is more than 840 years old.

After leaving Tibet to live in exile in 1997, Rinpoche received teachings and empowerments from His Holiness the Dalai Lama, Taklung Tsetrul Rinpoche, and Penor Rinpoche, among other esteemed teachers. After his exile from Tibet, Rinpoche divided his time between Bhutan, India, and Nepal, where he oversaw Kathok Ritrod Monastery.

Kathok Getse Rinpoche spent many years in retreat and taught widely in Asia, and was known for his mastery of the Dzogchen approach.

His Holiness the Dalai Lama wrote about the Fourth Kathok Getse Rinpoche:*

Katok Getse Rinpoche, like his previous incarnations, illuminates the teachings of Nyingma, the first Buddhist doctrine of Tibet, and embodies a great living legacy of the Buddhist teachings. Furthermore, some in his series of incarnations have a connection with the past incarnations of the Dalai Lama. For example, when Katok Tsewang Norbu went to Lhasa, the Seventh Dalai Lama, Kalzang Gyatso, held him in high regard and asked him to reverse, through ritual, the Mongolian army in northern Tibet, which he did. The Seventh Dalai Lama, greatly pleased, offered him a handsome reward. The true reincarnation of Katok Rigdzin Tsewang Norbu was the First Katok Getse, Gyurme Tsewang Chokdrup. When he came to Lhasa on pilgrimage he met the Eighth Dalai Lama, Jampal Gyatso, and the two of them immediately began exchanging teachings. This association became an inexhaustible offering that pleased all the buddhas, and great mutual respect developed between them. Later, the Third Katok Getse, Gyurme Tenpa Namgyal, came to Lhasa to meet the Thirteenth Dalai Lama, Thupten Gyatso. He was received with joy and they developed a good relationship. His direct reincarnation, the Fourth Katok Getse, Gyurme Tenpa Gyaltsen, through the power of his previous excellent aspirations and karma, was able to safely arrive in India as a refugee. He and I have connected as student and teacher. The Central Tibetan Administration, the Tibetan government-in-exile, on Thursday organized a prayer service for Kathok Getse Rinpoche. From tibet.net