SOFIA—An exhibition titled “Our East. Buddhist Art of the 14th–20th Centuries from Museums and Private Collections,” opened on 14 December at the Ekaterinburg Museum of Fine Arts, one of the largest art museums in the Ural region of Russia.

The exhibition consists of bronze sculptures, thangkas, and ritual objects from Bhutan, Buryatia, China, Mongolia, Nepal, South Korea, and Tibet. It brings together 80 Buddhist artifacts from the State Hermitage Museum in Saint Petersburg, the largest collection of Buddhist art in Russia, as well as objects from several Ural museums: Sverdlovsk Regional Local Lore Museum, the Chelyabinsk State Museum of Fine Arts, and the Ekaterinburg Museum of Fine Arts. Also featured are items from the Ural private collections belonging to O. P. Malakhov (Chelyabinsk), A. V. Glazyrin, and R. A. Makarkov (Ekaterinburg).

The curators of this unique exhibition are Sergei Vinokurov, head of the Office of Visitor Relations at the Ekaterinburg Museum of Fine Arts, Viktoria Demenova, assistant professor at the Department of Art History and Museum Studies at Ural Federal University, and Yulia Elikhina, custodian of the Mongolian, Tibetan, and Khotan collections in the Oriental Department of the State Hermitage Museum. The opening of the “Our East. Buddhist Art of the 14th–20th Centuries from Museums and Private Collections,” exhibition. From geometria.ru

Buddhism has been one of the official religions in Russia, along with Orthodox Christianity and Islam, since the 18th century. The three Russian Buddhist republics of Buryatia, Kalmykia, and Tuva each have a rich tradition of creating Buddhist sculptures and thangkas.

In Ekaterinburg, considered by many to mark the border between East and West, and where Orthodox Christianity has traditionally predominated, the practice of collecting Buddhist artworks began in the 19th century. During the Soviet era, the Ural region became involved in a tragic period of history for religious art. However, during the World War II, some of the sculptures sent to Ural to be melted down were preserved thanks to the actions of ordinary citizens, and over a period of 50 years these items have gradually found their way into museum collections in the region.

The title of the exhibition reflects important aspects of the Russian Buddhist traditions: scholarly studies of Buddhist culture and the practice of collecting artworks. These traditions date back to the 18th century and notably include S. F. Oldenburg, F. I. Shcherbatsky, Prince E. E. Ukhtomsky, and N. K. Roerich, all of whom collaborated on the construction of Europe’s first Tibetan-style Buddhist temple in Saint Petersburg. The works and impact of these and other scholars created close ties between Buddhism and the culture of Saint Petersburg. 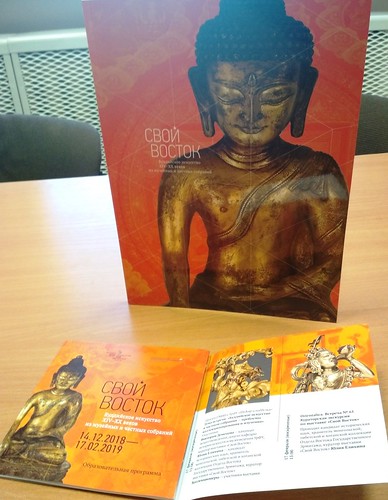 Leaflet of the exhibition. From geometria.ru

The Buddhist exhibition at the Ekaterinburg Museum of Fine Arts will run until 17 February. One of the exhibition halls with a virtual map. From geometria.ru