The carved head was donated to Shanxi Museum by John S. C. Wang, far left, and his wife. From china.org.cn

More than 90 years after it was removed from a statue in the fabled Yungang Grottoes, a 1,500-year-old UNESCO World Heritage Site in northern China, an ancient stone head has been returned to its homeland and is now housed in the Shanxi Museum after being donated by an American benefactor on Friday.

The carved head is believed to have originated in the Yungang Grottoes, a series of ancient Chinese Buddhist temple caves at the base of the Wuzhou mountains near the city of Datong in the northern Chinese province of Shanxi. The grottoes, described by UNESCO as representing an “outstanding achievement of Buddhist cave art in China in the 5th and 6th centuries,” are one of three famous ancient Buddhist sculptural sites in China, along with the Longmen Grottoes and the Mogao Caves.

The head was donated to the museum last week by John Shun Chieh Wang, 71, a Chinese-American calligraphy teacher at the Freer Gallery of Art and Arthur M. Sackler Gallery, and his wife. 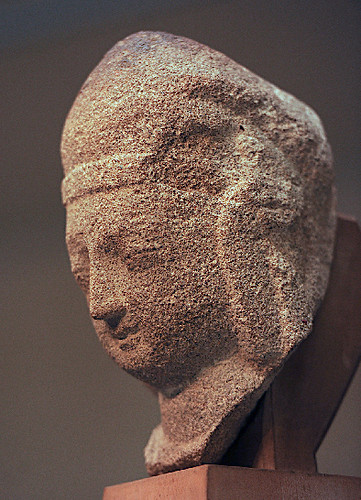 The head, believed to date to the Northern Wei dynasty
(386–535), was looted from the Yungang Grottoes.
From china.org.cn

“I was amazed by its delicate carving and the peaceful facial expression,” explained Wang, who said he had come across the carved head while working as an adviser at an auction house. He was cited by China’s Xinhua News Agency as saying that he had purchased it from a third-generation collector who did not appreciate the antique as much as his forebears. (XinhuaNews)

Measuring 26.5 centimeters high and 12 centimeters wide, the head depicts a smiling face carved in the nomadic Xianbei* style. According to Zhao Kunyu, an expert from the Yungang Grottoes Research Institute, the head has been dated to the Northern Wei dynasty, an empire founded by the Turkic Tuoba clan of the Xianbei, who ruled what is now northern China from 386–534.

Zhao observed that the head was likely looted during the mid-1920s, as a book published in 1925 contained an image of the original sculpture with the head still attached. “It could have been a little earlier or later than 1925, as we don’t know exactly when the photo was taken,” he noted. (South China Morning Post) The Yungang Grottoes. From wikipedia.org

Zhao added that more than 100 sculptures had been stolen from the grottoes over the years, most of which had found their way to overseas collections.

Little is known about the movements of the stolen sculpture in the decades between its removal and acquisition by Wang. “I would say the artifacts found me rather than I found them,” he was quoted as saying by the South China Morning Post newspaper, citing a Chinese-language report in the Shanxi Evening News newspaper.

Xinhua reported that this was the second time Wang has donated artifacts originating in the Yungang Grottoes back to China after returning a Buddha statue head to the Shanxi Museum in 2016. The Yungang Grottoes. From wikipedia.org

With a history of more than 1,500 years, the Yungang Grottoes comprise 252 Buddhist caves and niches excavated in the southern face of a sandstone cliff almost 800 meters long and 10–18 meters high, and some 51,000 statues. The Yungang Grottoes were listed as a UNESCO World Cultural Heritage site in 2001.

* A proto-Mongol society residing in what became modern eastern Mongolia, Inner Mongolia, and Northeast China, which were a major nomadic groups during the Han dynasty and subsequent dynastic periods.