A depiction of the Buddha’s awakening from Osamu Tezuka’s Buddha. From anime.es

For many people, those who identify as Buddhists and those who do not, this may seem to be an odd question. There is lot of scriptural and some archeological evidence about the life of Shakyamuni Buddha. Those are the facts and we can accept them or we cannot. Unfortunately, the situation is not that simple. Not only is not all the data conclusive, sometimes they are at odds. Searches for the “historical Buddha,” the “historical Jesus,” and, in my field, the “historical Dōgen,” have been abandoned by many scholars as problematic. Historical scholars are reconstructing “possible Buddhas” from a vast pool of sources and attempting to match them with archeological and archival evidence. Most of us are operating from narratives the sources of which we may or not be conscious. Some sources are more reliable than others. Many, if not all, sources are tinged by some sectarian, ideological or, in the case of us scholars, methodological agenda. In this essay, I would like to explore three versions of the Buddha’s life: common myths about Siddhārtha Gautama, the Konjaku Tales, a medieval Japanese text, and Osamu Tezuka’s manga Buddha.

I assume that most Buddhistdoor Global readers are familiar with the common myths about the Buddha’s life that are more or less solidly grounded in the Pāli Canon and the Jātaka Tales, narratives about the Buddha’s previous lives. When I say “myth” I don’t use the term in the sense of “opposed to fact,” but rather in the sense of myth as a genre of narrative that focuses more on the significance a story has than on its historical accuracy. I want to make it very clear: I am not making any claim about the historical accuracy or lack thereof of any of the stories I discuss here. Most of the time we narrate stories because they are important to us. There are many historically accurate accounts that we simply ignore because they do not mean anything to us. The late John Rae once said in his Seeing Through Zen (University of California Press, 2004) “it is not true, and therefore it is more important.” Today, I am telling stories that are important to us. 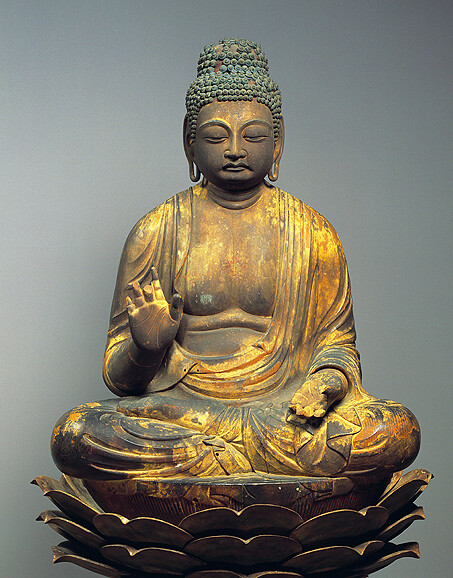 A Buddha statue from Nara National Museum. From narahaku.go.jp

For example, “we all know” that “Buddha,” or as the Japanese call him “Shaka-sama” (“Shakyamuni”), was born about 2,500 years ago in Lumbinī to the ruler of the Shakya territory. He left his palace after seeing the four sights symbolizing sickness, old age, death, and asceticism at the age of 28, engaging first in ascetic and then in meditative practices for six years, attained awakening after being tempted by Mara at Bodh Gaya, taught the Four Noble Truths in the deer park at Sarnath, and entered the final nirvāṇa in Kushinagara at the age of 80. Of course, there is more to the story than this, but this is the skeleton of Buddha’s biography “as we know it.”

Fast forward 1,500 years to Heian period (794–1185) Japan, which provides the backdrop to the Konjaku Tales. The Konjaku Tales, a history of Buddhism from India via China to Japan in three volumes, were written by and for the aristocratic elite in Japan during a time when the emperor system of the Heian period was in decline and soon to be replaced by the Minamoto family, who started the shogunate in Kamakura. The prevailing form of Buddhism at this time was Mahāyāna, mostly Tendai and Shingon, which undoubtedly influenced the portrayal of the Buddha in the Konjaku Tales. While the Konjaku Tales retained the sequencing of the events in Buddha’s story for the most part, the narrative itself is enriched with Mahāyāna imagery and ideology. In the narrative, gods and bodhisattvas guide the Buddha every step of the way. Shakyamuni himself existed in heaven before his birth. Moreover, in line with the general Mahāyāna literature and ideology, the Buddha’s disciple Śāriputra is painted in a rather negative light. In a scene where the Buddha discusses with Ānanda on whom should follow him after his death, Śāriputra is revealed as gluttonous, greedy, and spiritually inferior to Ānanda. According to the Konjaku Tales, Śāriputra took the donations given to him and the sangha for his teaching and devoured them all, thus becoming overweight. On the one hand this is, of course, as my colleague and friend Dr. Matt Orsborn aptly pointed out, Mahāyāna propaganda at its worst. On the other hand, it shows the author’s anti-clericalism in accusing the Buddhist priests in the Heian period of unbecoming if not immoral behavior. Jesus and the Buddha from the contemporary manga Saint Young Men. From amazingstoriesmag.com

This transformation of the myths about the Buddha’s life into an image of the author’s times becomes even more vivid in the case of Osamu Tezuka. Tezuka conflates the traditional and canonized stories about the Buddha with stories from other parts of the canon, introduces figures and anecdotes from different historical periods, and inserts his own narratives into the biography of the Buddha. While, in most traditional accounts, the awakening of the Buddha is preceded by his encounter with the tempter Mara, Tezuka weaves together three storylines: the story of Virūḍhaka, Tezuka dubs him the “crystal prince,” who traditionally appears in the later life of the Buddha, Yatala, a Buddhist stupa that in Tezuka’s version morphs into a biochemically created giant, and Shakyamuni’s quest for wisdom. For Tezuka, the Buddha’s awakening is, ultimately, a rejection of social injustice and an insight into the interconnectedness of all living beings. Similarly, in Tezuka’s version, the Buddha does not encounter the four sights that reveal to him the suffering of humanity and motivate him to search for liberation on a journey through his kingdom with his attendant, but they are shown to him by a female bandit, Migaila, with whom he falls in love. It is Migaila who introduces him to the joys and tribulations of life and who he has to abandon to alleviate the cause of suffering, social inequality.

One can, of course, ask why people are changing a perfectly good story. This is a question especially relevant in the age of the Internet, where quotes are arbitrarily assigned to famous people and stories are frequently made up and presented as fact. But I do not see the Konjaku Tales and Tezuka’s Buddha as attacks on the truth but rather as myths for our respective times (even though a footnote every now and then might have been helpful). They make people think about the Buddha’s teaching and its relevance. The reader is alerted to the social, political, and spiritual problems of our time and encouraged to do something about it. In some sense, these narratives constitute “skillful means” (Skt. upāya) that make the Buddha’s teaching accessible for us today. Isn’t this the purpose of all myths, past and present? An image of Shakyamuni and Migaila from Osamu Tezuka’s Buddha. From tmdb.org