I was just listening to a talk Chögyam Trungpa Rinpoche (1939–87) gave in the early 1970s. He was talking about how people feel towards their parents for having given birth to them. He said, “Whether you are trying to get away by being vengeful or by being smoothly thankful, you can’t get away . . . you can’t take your bottom off this earth even a fraction of an inch! That’s hard fact.” Rinpoche followed with a hallmark phrase of the Shambhala-Buddhist tradition: “We have to work with it.”

In a way, I think that is what Trungpa Rinpoche was doing when he instructed his students to move from the United States and Europe to a remote Canadian province on the Eastern Seaboard. In Nova Scotia, you can’t get away. Away to where? You’re in the middle of nowhere. It’s a 24-hour train ride to Montreal and a two-day drive to New York, Boston, or Toronto. Those are the closest, most reachable major cities. While today Halifax has grown into an exciting urban center, for Americans and Europeans in the early 1980s, there were few places more remote. My mother was among the first hundred students to move to Nova Scotia. She left Boulder, Colorado, where she had been working at IBM, to immigrate to Halifax in 1984. According to Shambhala community records, in 1983, there were about 50 students residing in Halifax. I couldn’t find an exact census for the number of Shambhala members in Nova Scotia today, but suffice it to say, it is in the thousands. When I was born, in 1991, the sangha was very active—there were group practice sessions and teachings happening at the Shambhala Center all the time, including a number of activities especially for children. 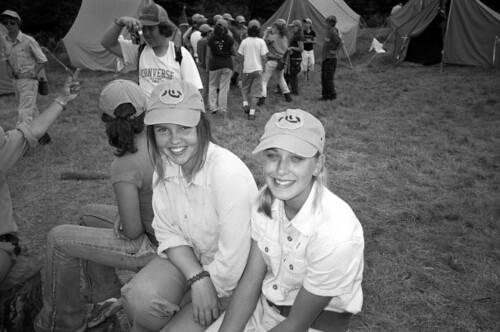 Jeana Mustain and Hasta in uniform at Sun Camp. Trungpa Rinpoche's
calligraphy of the character xin (meaning heart-mind) is on our hats. Image
courtesy of the author

Growing up as a child of Buddhist immigrants in Nova Scotia meant that I didn’t always fit in with the other kids my age. When I was seven, I asked my parents if I could go to Sunday School at our local Baptist church with my friend, David. He lived across the street from me, and his elder sister taught us younger kids Bible stories. I wanted to go so I could sing in the choir and meet the other kids from the neighborhood. At this point, we lived about 45 minutes south of Halifax, which we simply referred to as “town.” There were several other Buddhist families that had moved to our area, a semi-rural coastal district, and we had our own Shambhala Center. During my year-long stint as a Sunday School student, I would sing “Holy Night” at our church Christmas concert rehearsals on Sundays, while on Saturdays I listened to Jataka tales (stories of the Buddha’s previous lives) at Bodhi school at the Shambhala Center with the other sangha kids.

Those “sangha kids” were my very best friends. I made friends with children from outside the Shambhala community, like David in my neighborhood, but being with second-generation Shambhalians always felt like coming home. More than 20 years later, they remain my closest friends. We went through all the normal hurdles and triumphs of growing up together. And in addition to the regular mishaps and adventures of adolescence, we were exposed to the enlightened vision of Chögyam Trungpa Rinpoche and his son, Sakyong Mipham Rinpoche, through the Shambhala path. 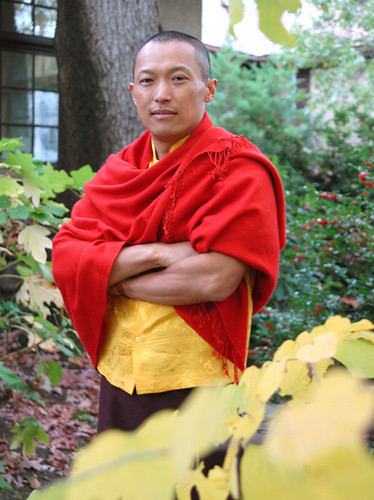 Trungpa Rinpoche was the first teacher to introduce Buddhism to the West when he left India for Oxford in 1963. When he came to North America in 1970, he not only had to translate the teachings, he also had to put them into terms that Americans could understand and create a culture to uphold the teachings in the West. This culture included all kinds of forms which aimed to create enlightened society—the heart of the teachings of Shambhala. Decorum, how to dress and brush your hair, how to conduct yourself when you eat, how to drink alcohol with awareness, how to walk, and, of course, how to sit, were all part of Shambhala Training. In this way, Trungpa Rinpoche transformed a bunch of grungy hippies into clean and elegant, upstanding people. As a young sangha friend of mine once said, “He taught them to sit down and shut up.” A lot has been written on the transformation of Rinpoche’s students from commune dwellers into serious practitioners. However, here, I reflect on the outcomes of that transformation for me—how I grew up within the forms of Shambhala.

One such form is known as “Rites of Passage,” which marks the transition from early childhood into an age of self-awareness, when children become more independent and capable, at the age of eight or nine. I remember feeling that Rites of Passage was a very exciting and also somewhat intimidating prospect. The process consists of a number of short group retreats over the course of one year. It felt like the first program to which we were specially invited. It wasn’t just activities for kids—it was our invitation to join the Shambhala path, and to learn just what that meant. 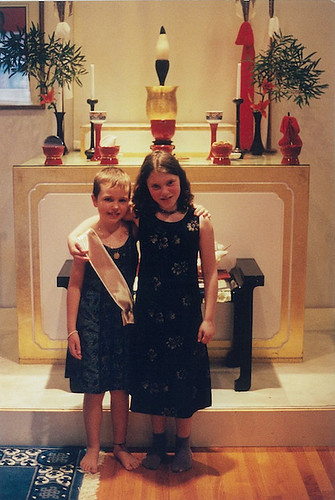 Rites of Passage. Hasta is on the left. Image courtesy
of the author

While it was mostly fun times with a bunch of friends, playing and learning new things, each part of the program also had a serious air. At every gathering, we would be introduced to a particular Shambhala art form or practice, or to a new experience. One time we went to a farm and walked in the woods and listened to the forest. Another time, we beat drums to learn West African dance. Calligraphy, Ikebana, and Kyudo (meditative Japanese archery) are some of the essential art forms of Shambhala, and were instituted by Trungpa Rinpoche, the foremost teacher of Dharma Art. When we learned calligraphy, the instructors sat with each of us individually while we created a spontaneous ink painting. We talked about the elements, and the elements that each of our calligraphies contained, whether one boy was fiery and that came through in his art, or another girl more watery. We weren’t painting pictures of rivers or bonfires or trees—the objective was to leave out any concept and just let flow your experience onto the page. We were introduced to Kyudo, and even made our own bows from Nova Scotian saplings. At the end of the program, we were each given an arrow, representing Drala, or joining heaven and earth. 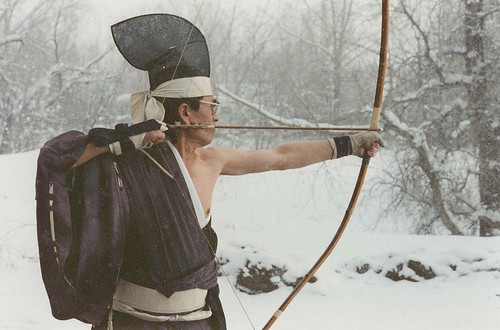 Shibata XX Sensei, lineage holder of Kyudo and 20th-generation bow-maker to
the Emperor of Japan. Sensei and Trungpa Rinpoche were very close. Photo by
Lee Weingrad. From Walter Fordham 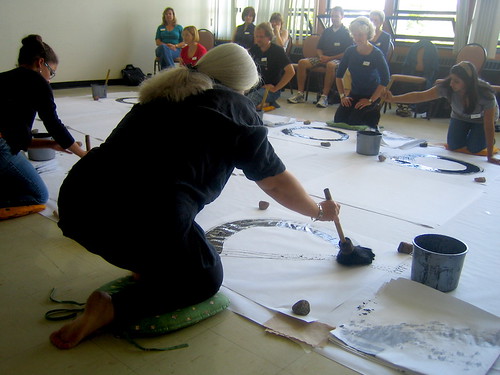 Just before entering the final ceremony to complete Rites of Passage, we had to give up something we dearly loved. I gave away my favorite stuffed animal—an elephant. (Most children gave up toys, which were later donated to Goodwill.) When we presented ourselves in front of the shrine, the teacher asked each of us what being a Shambhalian meant. The Shambhalian holiday, Children's Day, celebrated every year on the solstice. On the shrine are the Rigden King and Queen, as well as Gesar of Ling. Photographer unknown. From Walter Fordham

From age 10 to 16, most sangha kids attend Shambhala Sun Summer Camp. I loved Sun Camp—we all did. It is a 7–10-day overnight camp held at Shambhala land centers, such as Dorje Denma Ling in Nova Scotia. We live outside, practice discipline, have fun, meditate every day, and form incredible friendships. I remember that each morning toward the end of calisthenics, the staff would instruct us to lie on our backs on the ground. In corpse pose, we felt the earth beneath us and the sky above us. There were no further instructions, except “Don’t fall asleep!” We just had to be. Sixteen-year-olds at Sun Camp about to participate in our final Rites of Warriorship training before graduating from Sun Camp into adulthood. Image courtesy of the author

In that moment, in that pose, at Sun Camp, I really felt what Trungpa Rinpoche had said—my butt on the earth. At Sun Camp we had no technology, no iPhones or TVs or video games to transport us to a fantasy world. We weren’t trying to transcend to a heavenly realm through celestial visualizations. Our meditation instructions were: “Lie on the ground. Sit on your butt. Follow your breath. Walk.” You couldn’t get away from the hard facts of the cold ground beneath you or the overwhelmingly vast, empty sky above.

And we didn’t want to, most of the time. But, sometimes, it would rain at Sun Camp, sometimes for days on end, and be quite cold. (The weather in Nova Scotia can be pretty miserable.) When it rained, we would sing a call and response song. “What do you do when it rains?” “GET WET!”

There is nothing wrong with getting wet. You don’t have to try and protect yourself so thoroughly by staying inside. In fact, at Sun Camp, there is no inside. There is nowhere to escape to. We just had to be rained on, be wet—just be. 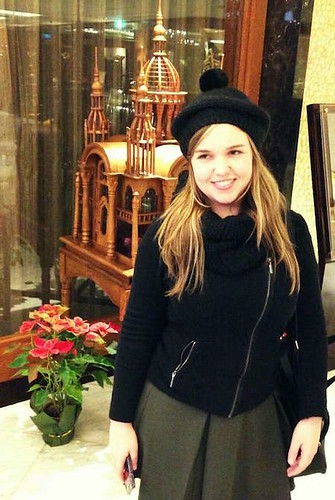 Now, in the many uncomfortable situations that come up in daily life, such as getting soaked through while walking home from the subway or suffering an onslaught of anxiety about a fast-approaching deadline, I feel an almost physical memory of what I experienced at Sun Camp. And I hear Trungpa Rinpoche’s voice in my head telling me that every situation is workable. I know, on some level, that it is useless to rationalize things, or fabricate an elaborate escape route to an imaginary realm where I am dry, or where I am fine, on a vacation without deadlines. I have no excuses now. I have to be here with my butt on the earth and the sky above me. And the great thing is that if I mess up—no matter how catastrophic the consequences, the ground will still be there beneath me.

So, thank you Chögyam Trungpa Rinpoche and Sakyong Mipham Rinpoche for creating Shambhala and all the people of the sangha for upholding the Shambhala Path. And thank you to my parents for being crazy enough to move to Nova Scotia to follow that path and bring me up there. Thank you for my Shambhala Training.

* This title is an homage to Pema Chödrön.

This article is based purely on personal experience. For information about Shambhala, see the Shambhala website and the writings of Chögyam Trungpa Rinpoche and Sakyong Mipham Rinpoche, such as Shambhala: The Sacred Path of the Warrior or Ruling Your World.

Hasta Colman is now living in Shanghai, where she is studying Chinese and preparing her research proposal to apply for PhD programs in Political Science and Asian Studies. She recently finished her Master’s in International Relations from the University of Chicago and spends much of her free time outside of school working with GPI Atlantic Youth, an organization she helped found that promotes youth-led community development in Nova Scotia, Bhutan, and across the globe. She also enjoys sailing and sometimes instructs for The Nova Scotia Sea School, an on-the-water leadership program for youth based on contemplative principles similar to those of Sun Camp. She plans to start a blog to publish reflections from her research in China, so stay tuned to www.chinafieldjournal.wordpress.com if that peaks your interest.

If anyone knows who took the photographs marked “Photographer unknown,” please write to content@chonicleproject.com.