By Jennifer Yo, with Bhikkhu Upanand and Suresh Bauddha
Buddhistdoor Global | 2015-12-21 | The Shakya clan, to which the historical Buddha, Shakyamuni, belonged, has a long history. Both before and during the Buddha’s time (he lived during the 5th/6th century BCE), there were three main Shakya cities: Kapilavastu, close the modern Nepalese border, Devdah, in Nepal, and Sankisa in Uttar Pradesh, India, which was also part of the Kapilavastu Kingdom. It is said that many hundreds of years before the Buddha’s birth, a group of Kapilavastu Shakyas migrated to Kol (Tree) Forest to the east of Kapilavastu and thus became known as the Koliyas. The son of King Prasenjit, Bidudabha, from Shravasti, attacked Kapilavastu and Devdah and killed many Shakyas and Koliyas, while others migrated to different parts of India. Today, the Shakya people live mainly in Nepal and around Sankisa, in different districts of Uttar Pradesh.

These surviving clan members are mainly farmers and, like the majority of India’s population, practice Hinduism. Regarding the Buddha as a Hindu god, they were entirely ignorant about his life until one of the clan members, Suresh Bauddha, met the Sri Lankan monk Bhikkhu G. Pragyanand Mahasthivir while studying at university in Agra. When he asked Suresh if he knew what “Shakya” in fact meant, Suresh replied, “It means we are the descendants of Shakyamuni Buddha.” But when Bhikkhu Pragyanand enquired if he knew who the Buddha actually was, Suresh was speechless. Thus Bhikkhu Pragyanand proceeded to tell him the life story of the Buddha. With a burning desire to introduce this important heritage of the Shakya clan to his family and community in Sankisa, in 1986 Suresh set up an unofficial organization at the grassroots level. He called it the “Youth Buddhist Society” (YBS). 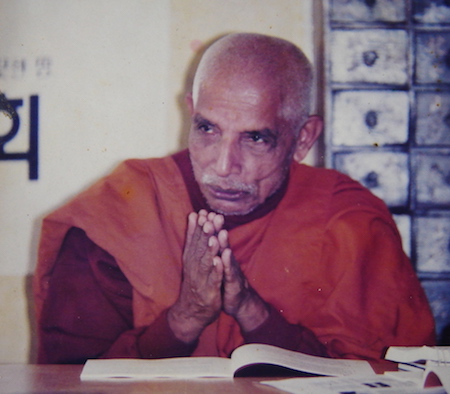 Following the guidance of Bhikkhu Pragyanand, Suresh and some of the young boys from his community took up the study of Buddhism in Bhikkhu Pragyanand’s Theravada temple, in Shravasti District, Uttar Pradesh. That he could teach in Hindi was a great advantage. He encouraged Suresh to do what he could for Buddhism, and especially to help his clan. Bhikkhu Pragyanand had in fact been one of the four leading monks to give Buddhist Refuge vows to the Buddhist leader Dr. B. R. Ambedkar* and his followers, and now he also ordained some of the Shakya boys as monks. Initially, some of the members of the Shakya community spread the rumor that Suresh had sold the boys to the temple for money. However, when the young monks returned and the people saw how gracious and dignified they had become, those who had previously lacked confidence in the YBS grew increasingly curious about their work. One of the monks, Bhikkhu Upanand, a senior student of Bhikkhu Pragyanand who was ordained by him in Shravasti in 1992, has now completed a PhD. He teaches Buddhist philosophy and Pali in the community and to students at the International Research Institute of Buddhist Studies, Lucknow University, as well as serving as general secretary of the YBS.

From 1986, Suresh also continuously invited monks from the Sri Lankan, Thai, Korean, and Tibetan traditions to give basic Dhamma teachings to the farmers in the community, Bhikkhu Pragyanand among them. Despite his advanced age (he is now 87), he would still go from village to village, riding on the back of someone’s bike. Most of the time, the teachings were given under a community tree, with people sitting on the ground after a day’s farming. With almost 30 years of grassroots work accomplished, including Dhamma teachings, meditation programs, and vipassana retreats, 68,700 Shakya families have now become Buddhist and are connected with the YBS. The biggest challenge for the YBS now is the general lack of Buddhist teachers able to teach fluently in Hindi. Most of the teachers are from a non-Indian background, and therefore almost all the teachings need to be translated; however, Hindi translators for the Dhamma are also very hard to find. In order to overcome this and to groom Buddhist teachers for the community, in 1992 the YBS started sending young boys and girls to various monasteries of the Theravada, Chinese, and Tibetan Buddhist traditions to take ordination. Today there are more than 150 young ordained monks and nuns from the Shakya community undergoing training in India, Nepal, and Thailand.

The YBS also organizes training for older monks aged 60–70 who live in the Sankisa area, most of whom have requested ordination in the last few years. YBS-invited teachers instruct them in topics like the Vinaya, Pali sutra chanting, the Buddha’s life story, and the application of Buddhist teachings in daily life. The YBS also organizes medical camps, charitable clinics, women’s empowerment programs, and computer literacy programs. They also build schools in remote and poor areas, and help Buddhist families who wish to build community temples to raise funds both for the buildings and for statues. 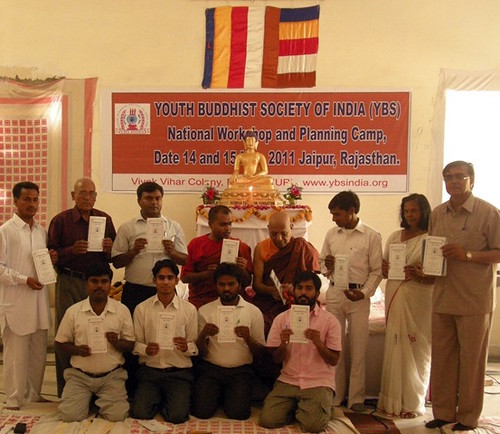 As an organization working in rural areas in India, one of the main issues has been the empowerment of women. It is generally very difficult for women to obtain approval from their families or financial support to participate in public events such as the Dhamma talks, cultural programs, medical and meditation camps, and other activities organized by the YBS. However, having worked in the community for many years, the YBS is now beginning to gain the trust of community members to allow their daughters to work with the YBS as volunteers, where they and their male colleagues are treated as equals. Some families even support the decision of those girls who wish to take ordination in order to become Buddhist teachers and examples for other girls in the Shakya community.

The YBS is a true grassroots Buddhist organization. Through their dedication and conscious effort to avoid mixing religion and politics, they have become one of the most important movements in the revival of Buddhism in India. *Dr. B. R. Ambedkar (1891–1956) was an Indian social reformer who initiated the Modern Buddhist Movement in India and campaigned against caste discrimination. Following his adoption of Buddhism in 1956, many Dalits (untouchables) converted as well.