A depiction of the Buddha’s conception from Borobudur, Indonesia. Image courtesy of the author

A white elephant sails out of the sky and gently enters his mother’s womb in the shape of dream. This is one of the most beloved images of the Buddhist tradition. It is painted on temple walls, carved into stone, and narrated in almost every hagiography we have. The Buddha chooses Maya out of all the women in the Ten Thousand Worlds because only she possesses the required attributes. She alone merits carrying the future Buddha into his final incarnation.

Maya’s pregnancy is said to have been unlike other pregnancies. Although most women suffer during this time, Maya was never tired, her feet never swelled, and she was filled with joy. Some texts even describe her as having developed magical healing powers while the bodhisatta resided in her body, and other texts say that her belly glowed with light. Maya is surrounded by protective deities, and when it comes time for her to deliver, all she has to do is extend her arm and the tree above lowers its branches for her to hold onto. The Buddha emerges from her womb through her right side and gods are there to receive him on heavenly cloth. Streams of fresh water pour out of the sky and the Earth trembles and shakes with enthusiasm as the savior of the world is born.

Despite all of this cosmic attention, however, Maya dies seven days after giving birth. Her death is one of the conditions all Buddha life stories must meet. Indeed, one of the attributes that make her the ideal candidate for the role of mother of the Buddha is that her lifespan is almost complete when he chooses her. Mothers of Buddhas are not permitted to live after they have fulfilled their obligation as fetal containers. The gods who had once surrounded her abandon their post the moment she delivers her exceptional son. Their purpose had nothing to do with her; it was him they were protecting.

Shakyamuni Buddha’s birth story is not easy on Maya and as the story evolves it becomes worse. Maya becomes increasingly separated from her son in the literature, separated from her own pregnancy and delivery. Her birth becomes a hygienic affair, with the Buddha entering and exiting her body without ever really touching her. The Lalitavistara Sutra even describes the Buddha living inside a palace within her womb, shielding him from the insides of her body. He lives inside her, but he has nothing to do with her. All the mess and blood and truthful humanity that goes with birth (and with women) is eliminated. Maya’s body was a cesspool of pollution and the future Buddha had to be kept apart.

To have womanhood eliminated with such insistent and consistent determination is heartbreaking. As a scholar, I am used to wrestling with such issues, but as a woman, as a person, I feel how agonizing these texts can be. 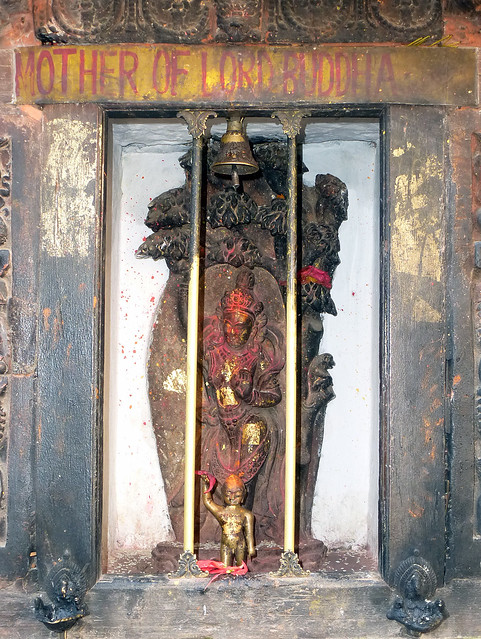 Shrine at a small temple dedicated to Maya in Patan, Nepal. Image courtesy
of the author

I understand all the arguments that can be made about why patriarchy exists: I understand that it has been the way of the world for most of our communal history; that it probably comes out of the agricultural revolution; that it was a way of parceling out roles in society; that it need not be as toxic as it sometimes feels like it is; that between the lines, there are spaces for women; that women can have their own traditions, their own ways, their own access to power.

That may all be true, but it is also true that the Buddha’s mother was killed off by the tradition seven days after she gave birth; that she was abandoned by the protective deities because her services were no longer needed; that her body was kept far from that of her son while he lived inside her because women’s bodies are polluting and dangerous.

I know that the Buddha refused Gotami’s request for ordination three times until Ananda interceded, and then the Buddha only agreed begrudgingly, warning the community that now that women were involved, the community would last half as long, because “women are like mould on a rice field.”

I know that the number of passages that speak ill of women is overwhelming; that women are described as temptresses and distractions; that monks are taught by the Buddha to imagine women as bloated corpses to help them overcome their passions.

Why couldn’t the Buddha have done better? This is the question I find myself returning to. Some argue that these kinds of teachings were a form of skillful means: his audience consisted of young monks who were struggling with desire and he was trying to steer them in the right direction. But if he really was a Buddha, he must have been capable of imagining a kinder method. He didn’t have to throw women under the bus. Signs prohibiting entry to women. Many Buddhist shrines and temples around the world are traditionally off limits to female devotees. Images courtesy of the author I would love to be free of my frustration with these issues. I would love not to be shackled to the hurt I feel each time I return to these texts. I would love to soar above patriarchy and not give it a second glance. But I can’t. Not when I find it in almost every text I read. Not when I encounter it in every Buddhist country I visit. Not when so many monks still think reviving the bhikkhuni order is blasphemy. Not when there are still Buddhist temples (as few as they may be) that ban women from entering. I am not imagining patriarchy. I see it. I am calling it by its name. And I don’t want it anymore.

The Buddha is supposedly the embodiment of transcendence. Why then, could he not transcend that?

I know that these frustrations arise out of an idealism I can’t shake. I know that patriarchy does not dominate every Buddhist reality, that not all monks challenge bhikkhuni ordination, that reality is much more fluid and nuanced than I am expressing here. And most of the time, as a scholar, I engage that nuance.

But it can be tiring to be nuanced. Sometimes I just want more from the tradition. I want sources that inspire me without my having to do mental gymnastics around the patriarchal obstacles embedded in them. I want not to have to apologize, justify, explain, or rail against. I want Buddhism to do what it promised to do: offer me a path to freedom. Not burden me with additional obstacles to navigate. I want Maya to give birth as a woman and to hold her son.

Mahaprajapati or Vasumitra? Contrasting Representations of Female Buddhist Authority
Historic Vinaya Teaching at Sravasti Abbey – A First for Buddhist Nuns in the United States
North of the 49th Parallel: A Review of Lotus Petals in the Snow
Buddhistdoor View: Strengthening the Tradition of Women’s Leadership in Buddhism