In the 17th century, Buddhism was firmly established in three Russian republics—Buryatia, Kalmykia, and Tuva. Since then, the Buddhadharma has become widespread and can be found in many parts of the federation. However, despite an increasing number of female Buddhist practitioners, there is only one female datsan (Buddhist monastery) in Russian territory. It is named Buddhist Female Datsan Zungon Darzhaling, which translates as “Prosperous and Noble Monastery.”* This unique Dharma center, located in Buryat capital Ulan-Ude, marks a significant development in the evolution of Russian Buddhism in the early 1990s.

The history of the Buddhist Female Datsan began in 1992 with the second visit of the Dalai Lama to Buryatia.** During this visit, His Holiness met representatives of religious organizations and advised them to build female Buddhist center in order to maintain peace and harmony among the Buryat peoples. There was only one woman at this historical gathering: Darima Sambuyevna Tsynguyeva. After hearing the advice of Dalai Lama, she and her husband, Dalai Anpilovich Budayev, decided to build a female Buddhist temple. Darima Tsynguyeva asked for blessings from the 19th Kushok Bakula Rinpoche (1917–2003)—one of the best known lamas of Ladakh, who served as India's ambassador to Mongolia from 1990–2000. He blessed the project and confirmed that it was necessary to build such datsan in Buryatia. Soon afterward, a group of Buddhist laywomen, with the support of Darima Tsyngueva, founded the Association of Lay Buddhists. This organization, involved in social and charitable work, led to the creation of the female Buddhist monastery in Ulan-Ude. Statue of Shakyamuni Buddha at the Buddhist Female Datsan. From infpol.ru

In 1995, the site of the monastery was chosen and construction began, with financial support from the Buryat government, several organizations, and Buryat Buddhist followers. The main funding for the construction for the datsan was offered by Darima Tsynguyeva and Dalai Budayev. That same year, lamas from the Buryat Buddhist communities Lamrim and Dkharma consecrated the place.***

In 1998, a dugan (a small wooden or stone temple) was built on the site of the future monastery. The first religious services were held by representatives of the Mongolian Buddhist Women’s Centre Tugs Bayasgalant (“Heaven of Joy”), one of the few nunneries in Mongolia, established in 1990. In 1999, a few Buryat women received vows from the senior Gelug teacher Venerable Yelo Rinpoche (also known as Yeshe Lodoy Rinpoche), founder of Datsan Rinpoche Bagsha Temple in Ulan-Ude. That same year, the datsan, still under construction, received the name Zungon Darzhaling, and hurals (daily services) began to be conducted at the dugan. Mongolian lamas, astrologists, and doctors were invited to perform ceremonies, along with the Buryat lamas. Religious service at the datsan. From smartnews.ru 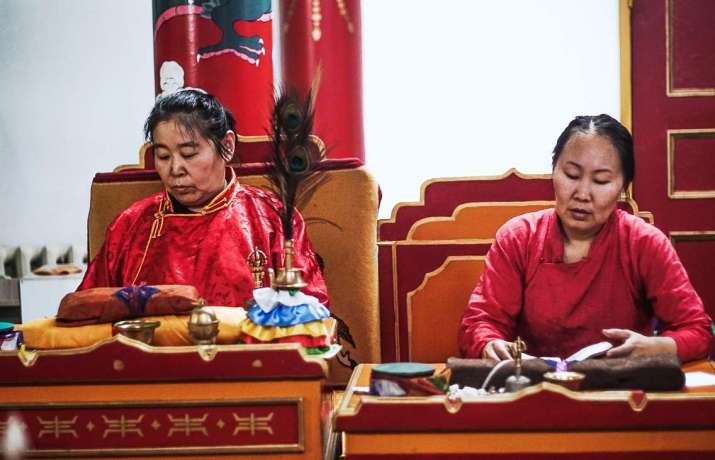 Religious service at the datsan. From infpol.ru

In 1999, the military officer and politician U Khin Nyunt, who served as the Ambassador Extraordinary and Plenipotentiary of the Republic of the Union of Myanmar to the Russian Federation from 1995–99, made a donation for the construction of a suburgan (stupa) at the site of the datsan. He arrived in Buryatia for the consecration of the stupa on 31 January 1999, bringing family reliquiae—a fragment of the Buddha’s bone and a statue of Buddha—which were placed within the sacred monument.

The official opening of the main building of Zungon Darzhaling took place on 1 July 2000. During the following year, a large statue of Shakyamuni Buddha was deliv­ered from St. Petersburg. Originally, the statue was brought from Tibet in 1913 from Agvan Dorzhiev (1854–1938)—a Buryat lama of the Gelug school of Tibetan Buddhism, who was a prominent public figure, a diplomat, and one of the teachers of the 13th Dalai Lama. The sacred image of the Buddha was restored and filled with 45,000 pages of mantras, and 65 kilograms of incense, grains, and jewelry. The consecration ceremony was led by Yelo Rinpoche. The main hall of the datsan. From vk.com Stupa at the site of the datsan. From vk.com

Currently, religious ceremonies and the services at the datsan are held by female lamas, who live with their families outside the temple. The abbess is Zorigma Budaeva, who is a daughter of Darima Tsynguyeva and Dalai Budayev and has held this respected position since 2002. Daily hurals are performed for the benefit of all sentient beings and especially for the wellbeing and prosperity of the Buryat people. One of the center’s most important tasks is to help women, as guardians of family life and protectors of societal peace. Its doors are open not only for female Buddhist practitioners but for all visitors, regardless of gender, age, or religion.

A branch of the female datsan has since been established in the settlement Maximikha in Barguzinsky District of Buryatia along with suburgan.

*** Lamrim in Tibetan means “stages of the path.” Dkharma is the Buryat way to write the Sanskrit term Dharma.”

The Mystical Image of Sarasvati in Buryatia
Faces of the Buddhist Goddesses: An Interview with Aryuna Balzhurova
The Largest Depiction of the Buddha in Russia
Construction of Avalokiteshvara Statue Underway in Buryatia
Buddhist Holy Sites of the Russian Steppes