O!! Chatral Sangay, the deathless Padmasambhava,
you manifested among us in human form
for the sake of ignorant beings like me.
I pray to you in a non-dualistic fashion.
Please bless us from your all-pervading wisdom mind.

His Holiness Chatral Sangay Dorje Rinpoche, one of the greatest Dzogchen masters of all time, at the age of 104 entered into Mahaparinirvana to awaken sentient beings from the delusion of permanence and attachment to samsara on 30 December 2015 at around 5 p.m. in Pharping, near Kathmandu in Nepal. He was the Root Guru of the regent Reting Rinpoche, who recognized HH the 14th Dalai Lama as the reincarnation of his predecessor. He was also the spiritual teacher of Chogyal Namgyal Wangchuk, the king of Sikkim, and the three generations of the Bhutanese Royal Family. On the other hand, he also taught thousands of people who didn’t even have a handful of rice to offer. The great compassionate Buddha of our time benefited beings without any partiality throughout his great long life. After his last breath, he remained in meditation known as “Thukdam” for three days. When the meditation was complete, his sacred body was kept in a Kudung container (a vessel in which a sacred body is preserved) and decorated with multicolored brocades, silks, parasols, gold, silver, semiprecious stones, and flowers. The Kudung was prepared by Lama Damtsik Dorje, one of Chatral Rinpoche’s oldest disciples. Shrine prepared by Namdroling Monastery outside the Kudung Temple

The news of Rinpoche’s passing was not immediately disclosed to the public, but was kept within the family. Rinpoche’s consort Sangyum Kamala, and his daughters Semo Saraswati Devi and Semo Tara Devi, were overwhelmed with sadness at losing him. Only on 5 January 2016, after the Kudung had been prepared for the Mahaparinirvana ceremony, was the news of his passing officially disclosed to the world, like the sound of great thunder. All were devastated to hear this extremely sad news, and very soon, people from all parts of the world started to flock to his humble residence, with heavy hearts and tears in their eyes. The two heart sons of His Holiness Chatral Rinpoche are HH Kathok Situ Rinpoche and HH Dudjom Rinpoche of Tibet. No words can express their grief when they learned of the loss of their Root Guru. Without delay, they began to plan for the Mahaparinirvana ceremony of His Holiness in Pharping. All Rinpoche’s family members, myself included, were present throughout the ceremony, which was led by HH Kathok Situ Rinpoche and HH Dudjom Rinpoche. Every day, the ceremony started at 8 a.m. and ended at 5 p.m. The main practice for the entire 49 days was the Vajrasattva sadhana of the Longchen Nyingthik lineage, of which the late Rinpoche himself had been a holder.

Many high Vajrayana Buddhist masters from Tibet, India, Bhutan, Sikkim, America, Taiwan,,and Nepal came to pay their respects to the Kudung and to offer their condolences to Rinpoche’s family during the 49 days. In his youth, Chatral Rinpoche had studied the Buddha-Dharma at the great Kathok Monastery in Kham (eastern Tibet) under HH Khenpo Nawang Palsang—Vimalamitra in human form—and HE Loka Tulku Rinpoche (the previous head of Kathok Monastery), HE Jamyang Tulku Rinpoche (the present head of Kathok Monastery), HE Kathok Nyingun Rinpoche (one of the golden throne-holders of Kathok), and a number of khenpos and disciplinarians all came to pay homage to His Holiness’s Kudung. They practiced the sadhana ritual of 100 Peaceful and Wrathful Deities from the Kathok tradition for five days. Likewise, from the great Palyul Monastery of Tibet, HE Tulku Thugsang Rinpoche and HE Muksang Kuchen Rinpoche visited the Kudung and offered the prayer known as “Lama Chöpa.” HE Chökyi Nyima Rinpoche, HE Chokling Rinpoche, and HE Phakchok Rinpoche, with hundreds of monks from their monasteries, also visited the Kudung and prayed for three days. Every day, many people from various parts of the world came to pay homage and pray, their hearts and eyes filled with devotion and tears. HE Namkha Drimed Rinpoche, the head of Rigon Monastery, also attended all the important ceremonies. Many monks from Japan, Indonesia, China, Cambodia, Vietnam, Thailand, and Sri Lanka came to participate as well. 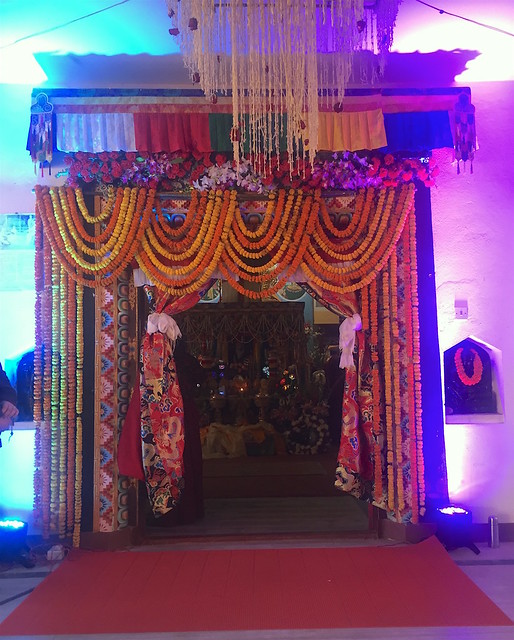 The atmosphere at the Kudung Temple was inexpressibly unique and holy: I could see immense faith, devotion, and humility in everyone who visited..I feel very fortunate to have been born at HH Chatral Rinpoche’s lotus feet and to have been his loyal disciple throughout my life. His teachings were always simple yet profound. I still remember him saying that merely learning the words of the Dharma is not enough—one must practice it to make one’s precious life meaningful. Rinpoche performed countless enlightened deeds during his lifetime. Among them, saving the lives of fish and animals was his favorite enlightened activity—he used to say that there is nothing more precious to a being than its own life, and therefore killing is the most heinous negative action and saving life, the greatest virtue. For decades, he went to Gandhi Ghat in Kolkata, India with his disciples and released millions of fish into the River Ganges, blessing them all to have higher rebirths temporarily and attain enlightenment ultimately. Another major enlightened activity he undertook was to establish retreat centers and train the minds of his disciples to attain enlightenment. He would not sell a single word of Dharma even for a mountain of treasure. These are some of the reasons why he was highly revered by many great masters throughout the world. After Rinpoche passed the age of 100, he could no longer go to India due to his advanced age. Since then, the Bodhisattva Foundation has continued Rinpoche’s legendary fish release practice at Gandhi Ghat, performing it on an annual basis, with HH Kathok Situ Rinpoche presiding. During the Mahaparinirvana ceremony, HE Tsoknyi Rinpoche and HE Mingyur Rinpoche also visited Rinpoche’s Kudung, and made prayers and aspirations. Lamas from other Tibetan Buddhist schools, such as the Kagyu, Sakya, and Gelug, visited too out of deep devotion and respect. Non-Buddhist masters were among the visitors as well, including masters from Dakshinkali Temple in Pharping and other Hindu temples. Those present were amazed to witness both Buddhist and non-Buddhist devotees lining up to catch a glimpse of the sacred Kudung. Many Troma practitioners from both Asia and the West graced the ceremony with the melodious yet profound practice of Krodikali. Personally, I experienced a mixture of sadness and happiness: while there is no greater grief than losing my Root Guru, without whom I would be completely lost in samsara, I had the priceless opportunity to experience such a powerful prayer ceremony, presided over by an assembly of masters like Buddhas, bodhisattvas, dakas, and dakinis of the Ten Directions. The energy of the prayers was unbelievably strong—it was as if Rinpoche was actually up there in the sky, blessing us directly. By visualizing him above your head for just a few seconds now, you can create a meaningful connection with him and receive a shower of blessings as well. 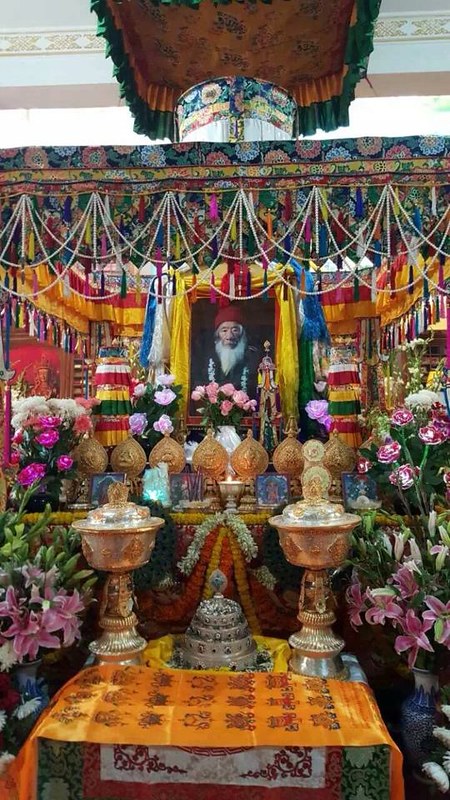 The last three days of the Mahaparinirvana ceremony were primarily organized by Namdroling Monastery. During this time, inside the Kudung Temple, the sadhana of Vajrasattva was led by HH Kathok Situ Rinpoche and HH Dudjom Rinpoche of Tibet. Outside the temple, the sadhana of 100 Peaceful and Wrathful Deities was led by HE Gyang Khang Rinpoche, Ven. Khenchen Namdrol, and Ven. Khenchen Tsewang Gyatso. More than 2,000 monks and nuns attended these last days, as well as people from all walks of life, who assembled enthusiastically to take part in this once-in-a-lifetime occasion. Apart from the high lamas, among the VIPS in attendance were Chogyal Namgyal Wangchuk, the king of Sikkim, and Their Excellencies the ambassadors of China, India, Sri Lanka, and Burma. The heads of the Nepal Police and Army also paid their respects. Behind the scenes were Chatral Rinpoche’s monks and disciples, who worked diligently both day and night. Mrs. Penzom Lama, the younger sister of Chatral Rinpoche’s consort, decorated the entire temple and Rinpoche’s residence with oceans of beautiful flowers for the entire 49 days. The whole ceremony was orchestrated and prepared by Rinpoche’s old benefactors, who succeeded in feeding and taking care of thousands each day. Due to Rinpoche’s infallible blessings there was not a single inauspicious moment, and our expectations were surpassed to the very last detail. 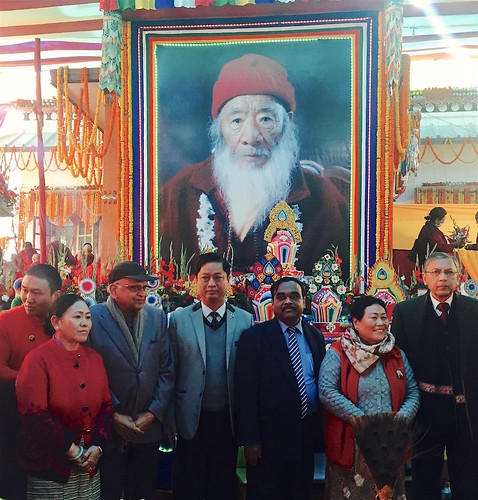 Their Excellencies the ambassadors of India, Sri Lanka, and Burma with
Chatral Rinpoche’s family members during the ceremony

The 49th day of the ceremony fell on 17 February 2016, and the Kudung Temple was extremely crowded. The family of the late Rinpoche were very emotional, since it was the last day of the ceremony and all the disciples from around the world would soon be returning home. Indeed, although impermanence and separation are always a cause of sadness, everything must come to an end, and the Mahaparinirvana ceremony of His Holiness Chatral Rinpoche ended in a most memorable way. On 18 February, after the ceremony was over, we witnessed a magical sight. To our amazement, a huge, circular rainbow with an image of Chatral Rinpoche made of clouds appeared in the sky right above the Kudung Temple. It was a miraculous display of his enlightened presence, and will never be forgotten by anyone there. 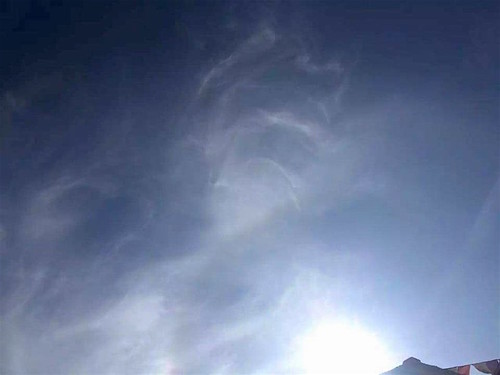 May the merit of writing this holy article bring unchangeable peace and happiness to all.
May this inspire countless beings to dedicate their lives to learning and practicing the Dharma.
May all prevail over attachment, hatred, and ignorance forever.
May we always meet enlightened masters in all our lives to come.

Lama Sangay Rabten is the nephew of Chatral Rinpoche. Based at Namdroling Monastery, he works with the Bodhisattva Foundation.