Ela Pedma’s dream of being a bronze sculptor began at the age of seven or eight. Her father returned from a trip with a book of folktales, and Ela was captivated by the story of Ko-Ngai, the bell-maker’s daughter. As the story goes, the emperor had ordered the creation of a great bronze bell that would sound across the land. Two attempts failed, and the emperor threatened to execute the bell-maker if the third did not succeed. An astrologer told Ko-Ngai that “the gold and brass, the silver and iron would not marry” until the flesh of a maiden was melted in the crucible. To save her father’s life, she jumped into the flood of molten metal as the third bell was poured, whereupon the metals united and a perfect bell was cast.* Ela decided at that moment that it was her destiny to work with bronze and its mysterious ingredients.

Fascinated by the degree to which an artist is embodied in their work, Pedma plays with the lines between creator, the act of creation, and what is created. Perhaps as a homage to the bell-maker’s daughter, in casting her first bronze sculpture she removed all her jewelry and threw it into the crucible. In talking about her work, she frequently alludes to the animate in the inanimate. She tells me that “salamanders”—greenish wisps—appear when molten bronze is the perfect temperature for casting: not so hot it will break the mold, but hot enough to pour into the detail. These “beings” manifest in the powerful liminal space when liquid transforms to solid, signaling the fleeting moment when creative force can be “thrown in” to shape the outcome.

When Pedma was 15, her family, Polish-Jewish refugees, settled in Australia, where she later studied sculpture at the Royal Melbourne Institute of Technology (RMIT). She became a successful goldsmith as well as a chef, establishing the well-known Café Lotus in Bali and making individual pieces of jewelry on commission or to be sold in boutiques in Santa Fe, New Mexico, and on Rodeo Drive in Los Angeles.

As a jeweler, Pedma tapped a demand for amulets. No doubt influenced by Balinese culture, she was drawn to the idea of intentions and energies embodied in an object. She developed a keen sense that she was not just responsible for the material form, but needed to be very focused and aware that thoughts could be transferred to and embedded in an object, with deeply personal effect. Talking to her, I am reminded of the protagonist in Laura Esquivel’s novel Like Water for Chocolate, whose unguarded emotions pour unintentionally into the food she cooks, affecting the people who eat it. In both cooking and making bespoke jewelry, Pedma felt she was evoking powerful forces beyond the merely symbolic. 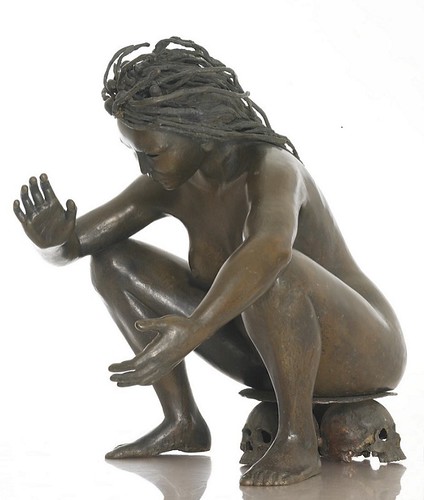 Her way of looking at art runs counter to the hard-core intellectualism of “conceptual art” that dominates many art schools and universities. Intellectualization and a preoccupation with symbolic communication can keep an artist at arm’s length from their creation, she believes, and from the power of their art to affect others. Pedma works on the grounds that something of the artist can be transmitted directly and non-conceptually through a work: “[What is] transmitted into the work is the artist’s intention, their very personal take on their philosophy and spiritual orientation—thus we have the means to create objects that not only are empowering us but also directly heal, inspire, and teach others. I call it ‘prayers in 3D’.”

Pedma suggests the dominant strands of Western art are “afraid of letting the genie out of the bottle.” Are they seeking safety in a desiccated intellectualism that separates objects from the source of their power? If, as the Dharma suggests, one accepts that nothing is separate from mind, the separation between the self and external objects ceases to make sense. In such a world, objects are implicitly imbued with power: they manifest and embody the energy of mind itself.

During a period of disillusionment, what she describes as a “dangerous crossroads,” Pedma met Dagpo Rinpoche, who become her first Dharma teacher.** In making amulets, she felt oppressed by the weight of expectations and demands arising from the human desire for power, protection, and control over destiny. The Dharma offered Pedma a new way to handle this potentially dark side of her art. According to the Dharma, intention is as important as action, if not more so. In working with intention, the cultivation of compassion and wisdom offers protection from the damaging forces of desire and fear—the grasping of ego. 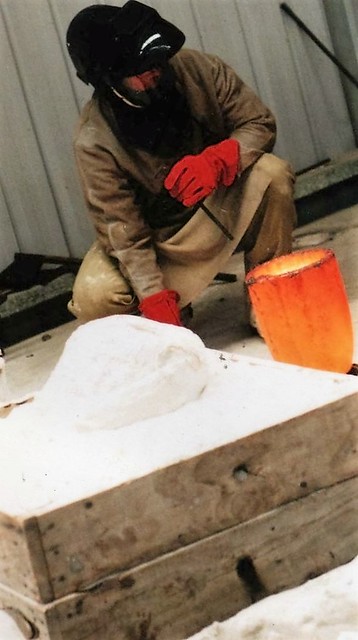 At the time of their meeting, Dagpo Rinpoche told her, “Never, never give up being an artist, because one day you will find a way to make it meaningful.” She offered him a piece of lapis, which he asked her to make into an amulet of the Sanskrit syllable HUM. When she ran out of gold for inlay, Pedma, recently divorced, melted down her wedding ring to finish the syllable.

In her mid-forties, Pedma returned to Australia and enrolled, finally, in a bronze-casting course at Southern Cross University in Lismore. She was eager to pursue a long-held vision of a larger-than-life “quantum mother” figure in bronze. However, as a student, Pedma received little support from an institution where figurative work and spiritual inspiration were frowned upon. Pedma talks of witnessing younger students giving up in frustration at being constantly challenged about the relevance of spiritual or Dharma-driven art practice. She says, “I survived because I was more matured in my art practice, blessed by the Guru and very stubborn . . .” As an older woman, the heavy foundry work was also a challenge. She enlisted the help of a young homeless man she “adopted” after finding him camping under her house (he was later deported as an illegal immigrant, but was able to use his experience working with Pedma to find work in a US foundry).

Pedma says her first piece was less a work of art than an act of devotion, “a whirlwind of energy that possessed me.” Inspiration came in dreams that had the character of instruction—“a quiet, constant push” to create—down to specific details like the figure’s sitting position, hand gestures, and fangs. Pedma says that she did not know quite who or what she was creating until another Buddhist friend saw the work in progress and told her it was a dakini.*** 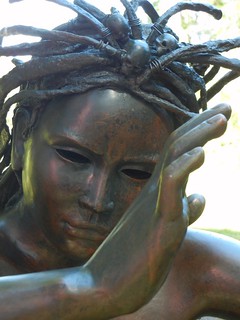 On completion, the sculpture evoked a strong emotional response from many who saw her, enraging some while reducing others to tears. The depth of her empty gaze can evoke the vast space of Samantabhadri, the primordial mother Buddha. Pedma showed a photograph to Dzongsar Khyentse Rinpoche, who recognized the figure as the “black mother” (Krodhikali) from his lineage. Pedma became a student of Khyentse Rinpoche, offering the dakini sculpture to him and making several other sculptures for his private collection.

Pedma says she approaches sculpture as a yidam practice, in which one visualizes and identifies with the “deity” in order to transform ordinary thoughts and emotions and develop qualities of enlightenment. Again, what “goes in,” in terms of the creator’s intention and state of mind, is as important as the resultant form.

Creation is not driven by an exhibition date or commercial deadline, but operates outside ordinary time. It is not an aesthetic or intellectual exercise, or a symbolic communication with an audience. It is profoundly experiential and transformative, and not just for the creator, but for anyone who chooses to use the resulting form as a source of inspiration and support for meditation practice.

Beyond sculpture, Dzongsar Khyentse Rinpoche has encouraged Pedma to branch out into making ritual implements for use in Vajrayana practice. In the modern world there are obvious difficulties in continuing the tradition of using human bone for ritual objects (a practice somewhat equivalent to the medieval Christian practice of memento mori, the use of human skulls as a reminder of death). Pedma has experimented with making ceramic thigh-bone trumpets, and is now producing porcelain skull cups glazed with human ash bequeathed by friends and fellow practitioners. 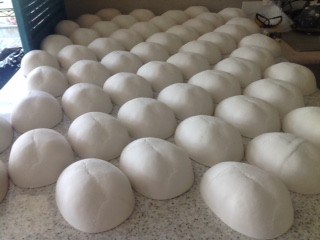 From the early inspiration of the bell-maker’s daughter who leaped into the flood of molten metal to save her father, Pedma continues to work blending “being” and object with the aspiration to benefit others. She asked me to share her story in the hope that it might encourage and inspire young artists embarking on a Dharma path to move beyond the constraints of their training and seek the essence of art as Dharma practice.

*** When Chögyam Trungpa, pioneer in the translation of Tibetan Buddhism to the West, was asked “What are dakinis?” his answer was, “One never knows.” In their Indian origins, dakinis were demonic; the blood-sucking inhabitants of cemeteries and charnel grounds; the personification of wrath. In Tibetan Vajrayana Buddhism, dakinis or khandroma came on the most profound level to represent the essence of wisdom. For Tibetans, khandroma are often messengers, appearing in dreams or in the flesh. Fierce and naked, the shock of their appearance is thought to break the habitual patterns that keep us in ignorance. It creates a chink in our psychic armor and, in the space that opens, reveals our own innate wisdom. Their nakedness is not sexual, but points to the pristine awareness that emerges when the prejudices and preconceptions that cloud our everyday perception are stripped away. Kha means “sky” or “space,” and dro, “movement.” In a literal sense, the khandroma is “one who moves through space” or “sky walker” (it is where George Lucas got the name for Star Wars). On a deeper level, dro has connotations of understanding, and kha is shunyata, a Sanskrit word that is often translated as “emptiness” but also has a sense of being full of everything; pregnant with possibilities. The khandroma is therefore one who moves without obstruction, fully awake to the vast and inexpressible nature of reality.