The illusory nature of reality. From matrix.wikia.com

An increasingly discussed topic these days is that of spiritual bypassing. Here is my contribution to this conversation.

The great masters of old were renowned for their ability to match a teaching with the needs of the student. This has, in part, lead to the countless nuances within each spiritual path and tradition. This has also inevitably lead to coteries and then, too often, to factions within these traditions, each often claiming superiority and harboring ideas of supremacy, even within the paradigm of a single religion. Yet each of these diverging avowed delineations was surely originally intended for the benefit of the individual seeker. Our relationship with our spirituality is truly subjective.

For many people today, the monotheistic concept of God, the pantheon of polytheism, and even human autonomy has been replaced with terms akin to “a loving universe.” In a sense, this does serve to marry together many apparently differing schools of thought. In modern science, the idea of fixed matter has been unequivocally replaced with the often-transmogrifying field of quantum physics, with all its unfolding theories. This allows space for the fractal existence of an all-encompassing energy field and its intrinsic relationship with all contained therein—an energetic universe that interfaces with the frequency of the heart and mental acuity, personal accountability, and compassionate deeds bridges the ethical and moral fundamental teachings of Buddhism and aspects of quantum field theory in many respects. However, the illusory nature of reality that is increasingly being supported by science, coupled with Buddhism’s esoteric teachings of nonattachment have also lead many would-be practitioners to leapfrog into the chasm of detachment, non-accountability, and emotional bypassing. Making matters arguably more complicated, in some cases even worse, the earthly proclivities of certain spiritual teachers have been promulgated with esoteric justifications. One concerning trait is that of the unconscious aggrandized spiritual supremacy of some, when they seem to be in the groove of intellectualization and their only embodiment has been leading from the root chakra. It is extremely important not to misconstrue non-attachment as a justification for emotional irresponsibility, nor the denial of earthly self-care. This has lead many people to compartmentalize trauma and emotional malaise, and to continue their spiritual ascent completely unconscious of the embedded patterns deeply hidden within the biology of the forgotten basement of the brain.

Seeking lofty spiritual practices without first addressing these emotional shadows is like spring-boarding to the rooftops while ignoring the rotting foundations and subsequent floors of the structure holding us aloft. The castle may look impressive from the outside but may collapse underfoot at any moment. 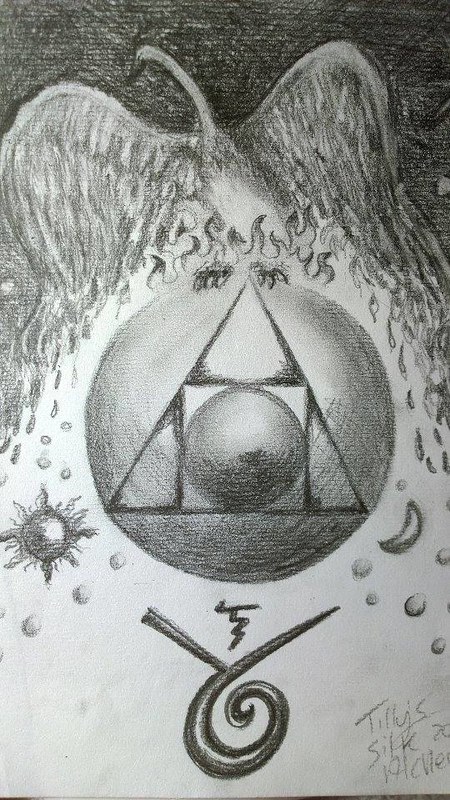 To gain a better understanding, we first need to accept that, as energetic as we may be in fundamental nature and in our dance with the energy of the cosmos, we are functioning through vibrations that have taken on a particular frequency, and that frequency, as we recognize and label it, is biological. That biology, for all intents and purposes, is highly programmable; influences from our external world affect our biology in the same way that a programmer directs a computer. Such events can eventually become hardwired into our system, buried so deeply and forming so much of our personality that they could arguably transcend one earthly body to another if ignored.

This is where neuroplasticity and epigenetics come into play. Our brain, as complex as it is, is continually being reshaped by our experiences and repetitive behaviors. That is great when done consciously and deliberately, such as when we learn a language or a musical instrument. But if it occurs unconsciously, such as during situations of systematic abuse or neglect, then we will likely bury the most traumatic of these experiences in our limbic system, within the most ancient part of our brain. (The part responsible for the fight-or-flight response and the lesser-known freeze response. It can keep us locked into repetitive situations in which we are frozen like a deer caught in the headlights of an oncoming vehicle). Negative experiences are buried deeply as a survival mechanism, and as a result, we promptly consciously forget all about them. 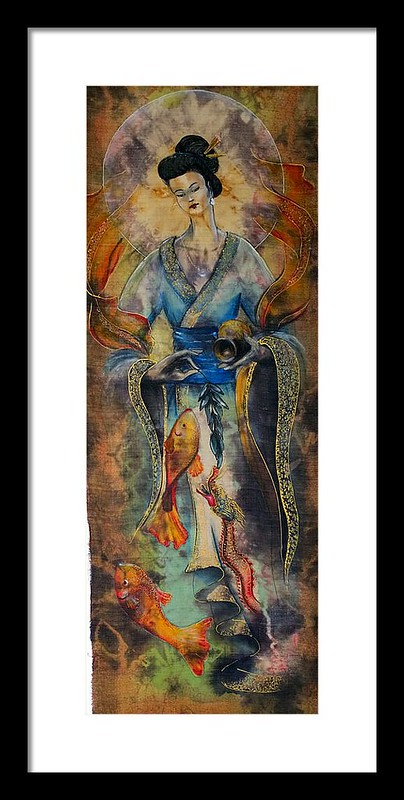 ​Silk painting of Kuan Yin, the boon-bestowing goddess of
compassion, by Tilly Campbell-Allen. Cultivating compassion
begins with being compassionate with oneself. Image courtesy
of the artist

Our reactions to almost everything in life are filtered through the veil of these conditionings. We typically fall victim to the most common of human traits thanks to the basic survival-based part of our brain—reactions such as fear and insecurity, assumption and projection. These manifest in various ways, from depression to anger, from isolation to craving external distractions, from one extreme of rejecting people to excessive people pleasing. The most basic part of our brain wants to keep us safe; that is its prime directive. Once it recognizes certain behaviors, it will inevitably seek the familiar reassurance of similar situations. Its survival depends on the wellbeing of its host—so it will convince us, often regardless of negative situations, that “it’s all for your own good, so stick with it.”

If, as a child, your experience of love was emotionally distant, your brain, as crazy as it might sound, will seek relationships that maintain distance, emotional or physical, or will push partners away, however much you may yearn for closeness and intimacy. Distance becomes your brain’s comfort zone and what it thinks is the normal way for love to be expressed. The more this pattern is repeated, the more the biology of the brain is formed, like a feedback loop confirming this pattern as “normal.” Even when you intellectually understand that there are other ways to express love (you’ve seen it in the movies) your brain has become hardwired to behave otherwise and we continue to live on autopilot, at the whim of the reptilian brain. This has emotional and, eventually, physically repercussions. Doctors in neurology, psychology, and physical health have documented this correlation between brain biology and physical health, something long-noted by certain experts in the field and made more mainstream by cellular biologists such as Bruce Lipton. Childhood trauma is now understood to carry serious illness implications more than 20 years later, with the potential to significantly shorten our lifespan if not properly addressed.* The more we unconsciously enforce negative brain states, the worse the effects on our biology, imprinting on our psyche to such a degree that it creates a memory that could continue to haunt us in our next incarnation. 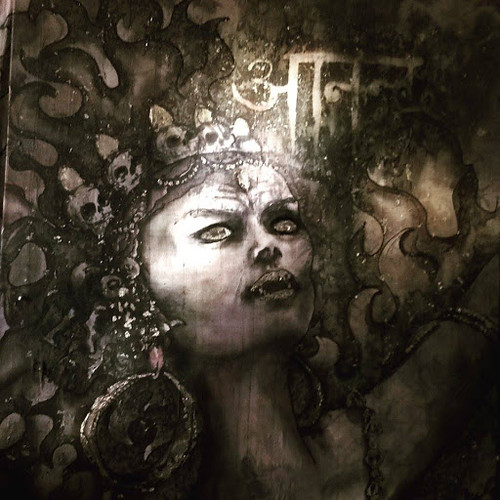 However, there is a growing body of evidence supporting the phenomena known as the placebo effect—that we can heal ourselves through the power of thought. If we believe the red pill to be the cure, then it will be. This is the “biology of belief,” and is most notable in cases of disease, but as we now know, many diseases have a sometimes deeply hidden emotional component, so it becomes imperative to address these dark vaults of repressed trauma before we even think of climbing blindly to the heady heights of cosmic non-attachment—if not for this lifetime, then the next. Become conscious of it now and transmute it, lest it take us by surprise in the next life, when we may call it bad karma.

Reprogramming our brain to address negativity is incredibly helpful for physical ailments. There are a number of techniques for consciously reprogramming our neural structure, which in turn sends the appropriate information to where it may be needed in the body. More fundamentally important, however, is addressing and healing our psychological and emotional body before leaping into lofty spiritual work, especially that of non-attachment, as without doing so we set ourselves up on very unstable ground.

One day, many years ago, I was working with my father-in-law, a very practical and unspiritual man. We were doing some house redecorating and such, when he said to me, the more time you spend on preparation work, the easier and quicker the finishing will be, with a much better end result. Profound words, given that he was only speaking about wallpapering! 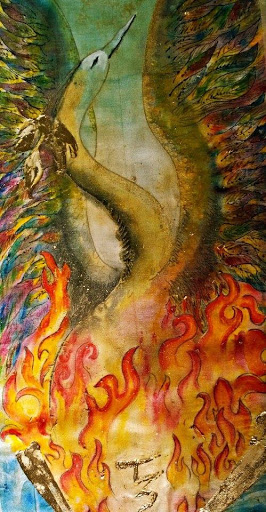 Rise of the Phoenix. Silk painting by Tilly
Campbell-Allen. As with the Philosopher's
Stone and Reiki symbol, once we have
healed old emotional traumas, we can
healthily align and ascend to the esoteric
realms. Image courtesy of the artist

Your body is your ashram and your guru lies within. Do as much preparation work as you can at the beginning, in very pragmatic ways, before you seek to start decorating it.

As an artist, I have spent many years researching the power of symbols on the brain. The beauty of imagery is that it bypasses the need to cognate any intellectual information and yet it still communicates its message. My interest is in how to use this knowledge to our benefit. I have covered how I believe imagery affects the biology of the brain in other essays for those who are interested in this form of “prep work.”

Bruce Lipton: Epigenetics 101 ( Quantum University Facebook)
Mina Bissell (LBNL, UC Berkeley): Half the secret of the cell is outside of the cell (YouTube)
Evidence for placebo effects on physical but not on biochemical outcome parameters: a review of clinical trials (PubMed Central)
How childhood trauma affects health across a lifetime | Nadine Burke Harris (YouTube)