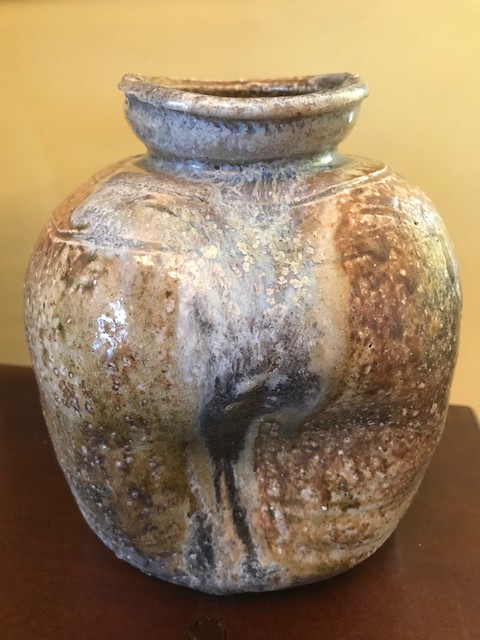 Shigaraki ware is one of Japan’s most ancient and beloved ceramic traditions. The rugged, unglazed pottery and stoneware has been produced in a valley to the southeast of Kyoto for almost 1,000 years, initially as functional vessels used in local farmhouses to store and process food. Around 500 years ago, their humble appearance attracted the attention of tea masters who practiced the tea ceremony (Jp: chanoyu), and tea ceramics were increasingly produced. Today they are collected as works of art. The humble forms and simple natural ash glazes resonate strongly with the Zen Buddhist ideals of austerity, spontaneity, and simplicity that inform the wabi-style tea ceremony that emerged in the 15th and 16th centuries. However, the relationship between Shigaraki ware and Buddhism extends beyond the tea ceremony in ways that are less direct and not always obvious. These wares, which seem to have been born from nature itself, have, perhaps more than any other Japanese ceramic tradition, evolved along with the development and spread of Buddhism in Japan.

Excavations of archaeological sites in Shigaraki Valley have revealed that the earliest ceramics produced in the area were glazed earthenware roof tiles made in the mid 8th century for the palace of Emperor Shomu (r. 724–49), who made Shigaraki his capital for a few months. Although the emperor returned to Nara, the palace was never completed, and ceramic production ceased, his brief presence in the valley led to the establishment of several Buddhist temples there. The first true Shigaraki wares were likely made in the 12th century, during the Kamakura period (1192–1333) when Japan came under the control of a military government, which established its capital in Kamakura. Made from high-firing, iron- and feldspar-rich stoneware clay, and sprinkled with natural ash glaze, these functional vessels were handmade by farmers who took up potting part time to furnish local households and temples with wares required for storing and processing food. 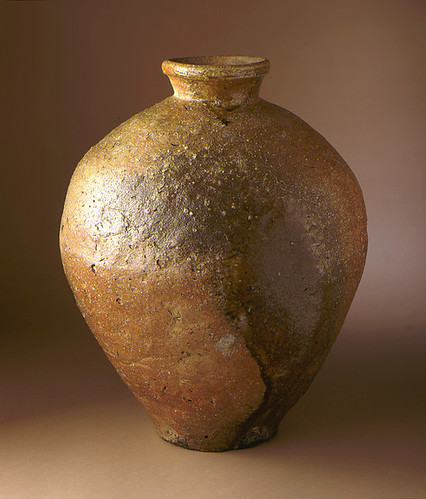 The best known of these early vessels is the tsubo, a jar with a narrow neck and small mouth that was used primarily for storing rice seed collected after the autumn harvest and saved for planting the following year. Tsubo were made in various sizes—the largest for long-term food storage and smaller jars for containing foodstuffs used every day in the farmhouse, such as salt, pickles, honey, and millet syrup. In the 13th and 14th centuries, smaller tsubo from Shigaraki and other ceramic centers of the period were also made for use in nearby Buddhist temples. At this time, Buddhism (particularly the Pure Land, or Jodo, and Zen schools) was spreading among the population and with it many of its ceremonial practices, including cremation. Excavations of temple sites near Shigaraki have revealed that many tsubo were used as burial jars to hold the cremated remains of the deceased.

Zen Buddhism was particularly popular with the military rulers of this time, and when the religion was brought from China, many new foods and drinks also entered Japan. Most famously, powdered and whisked green tea, or matcha, was drunk in Zen Buddhist temples as a stimulant during meditation and would later profoundly effect Japan’s ceramic traditions. However, it was the vegetarian diet of Zen practitioners—and specifically the soybean—that was to have a more immediate impact on the nation’s eating habits and ceramic traditions. During this period, the Japanese started fermenting soybeans into miso paste, a staple that has since been used in soups and sauces, and from which the by-product soy sauce is created. As these two foods were consumed throughout the country, two more ceramic vessel types grew in importance. A shallow grinding bowl called a suribachi, which features incised lines for grinding and a small everted mouth for pouring, was used for grinding the coarse miso into a soft paste, as well as bean curd into tofu. Large wide-mouthed jars called kame were used for fermenting and storing the paste and sauce. As more people throughout the country adopted a predominantly vegetarian diet, Japan’s many ceramic centers, including Shigaraki, produced vessels to contain these foods. 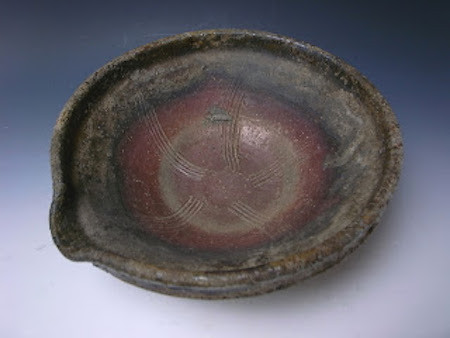 During the Muromachi period (1336–1573), the military capital was moved to Kyoto, and the drinking of matcha spread from the country’s Zen Buddhist temples into the homes of wealthy military lords, who hired connoisseurs to serve tea to their guests—often in heavily decorated reception rooms using expensive vessels imported from China. One of these experts was Murata Juko (1423–1502), a student of both Jodo and Zen Buddhism. Juko was hired by the military elite as a tea master and introduced Zen Buddhist ideals into the practice of serving tea. He developed wabi-cha, a form of the tea ceremony that emphasizes simplicity, austerity, and humility, encouraging the use of rough, domestic ceramics as well as elegant Chinese glazed wares. In particular, he promoted the use of Shigaraki tsubo as storage jars for tea leaves (though in the kitchen, not in the actual tea room). Juko’s support and Shigaraki’s proximity to the capital, Kyoto and to Uji, the foremost center of tea production, led to an increase in demand for Shigaraki tsubo. Many of Shigaraki’s part-time potters gave up farming to produce ceramics full time and began using the kick-wheel to speed up production. 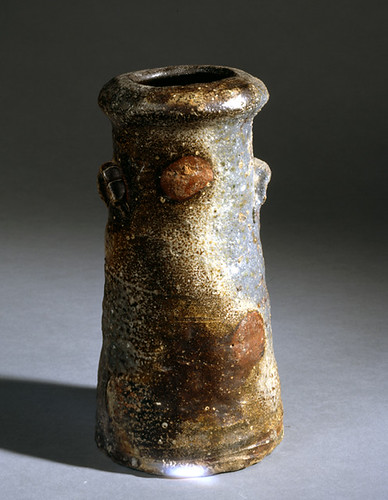 Juko passed on his wabi aesthetic to his student, tea master Takeno Joo (1502–55), who further promoted his ideals and went on to teach Sen no Rikyu (1522–91), the most famous and influential of all Japan’s tea masters. Under Rikyu, who became tea master to the shogun in the late 16th century, rustic domestic wares were elevated to the highest status in the tea ceremony and Shigaraki experienced a cultural transformation. Shigaraki’s potters not only increased their overall output but also began creating new vessel forms, including tea bowls, flower vases, and water jars, all of which occupy central roles in the tea ceremony. Since this time, the evolution of these rugged, natural-looking ceramics have been deeply interconnected with the tea ceremony and its spiritual ideals. 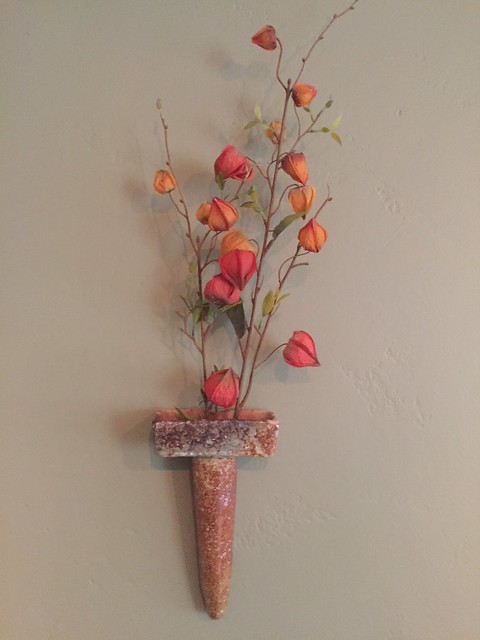 During the late 19th century and much of the 20th century, many of Japan’s traditional art forms, including the tea ceremony and Shigaraki ceramics, suffered a decline in popularity as the nation ardently adopted Western cultural practices. For many decades, potters in Shigaraki turned their hands to glazed wares such as hibachi braziers and later flower pots, rather than the more traditional vessels. However, thanks to a handful of ceramic artists, Shigaraki has recovered its vibrant tradition. In particular, the Takahashi lineage of potters has preserved the spirit of Shigaraki in their jars and vases inspired by earlier vessels. Current head of the kiln, Takahashi Rakusai V, not only embraces the Zen simplicity admired by early tea masters but also infuses his work—such as his quiver-shaped flower vase—with playfulness, another quality often associated with Zen Buddhism. Yasuhisa Kohyama (b. 1936), a master of both traditional-style wares and highly contemporary sculptural ceramics, has a deeply spiritual and meditative attitude to his craft. In a recent catalog of his work (Yashuhisa Kohyama: The Art of Ceramics, Arnoldsche Art Publishers, 2015), his words acknowledge Shigaraki’s long connection to nature and Buddhist thought:

Every time I fire, I’ve come to recognize that I am in Nature; I am a small part of Nature. Intently I watch Nature over and over again; working the clay, inspired by Nature, I am free to allow creation to happen. 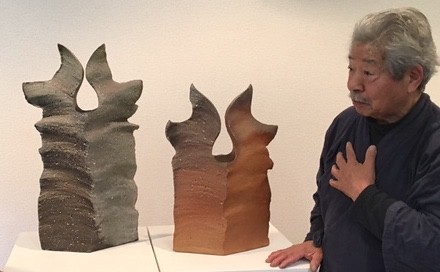 The Bell-maker’s Daughter: A Journey in Dharma Art
Zen and the Art of Tea Drinking—an Exhibition at the Freer
Kintsugi: Fix a Broken Heart with Gold!